In Japan, Paraplegic Man Resorts to Crawling Up Stairs After Being Refused Help Boarding Plane 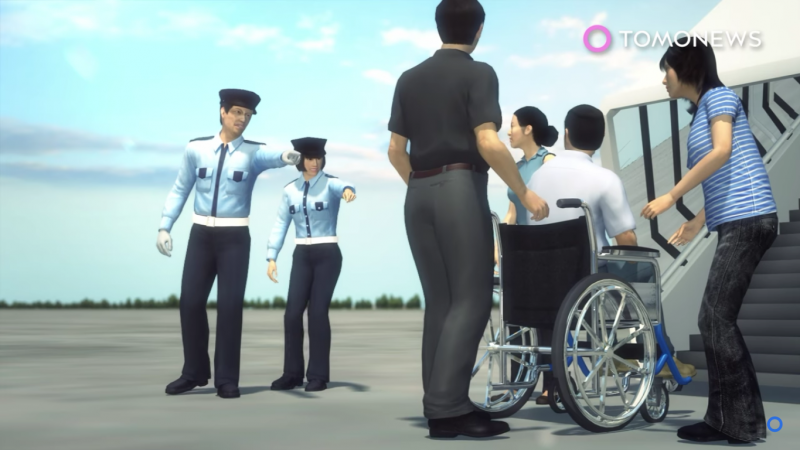 A disabled Japanese passenger and a low-cost airline made international headlines after the passenger, a paraplegic without the use of his legs, had to resort to crawling up a flight of stairs in order to board an airplane at Amami Airport.

While the airline was forced to apologize and promised to improve services for disabled passengers, discussion in Japan focused mainly on whether or not the passenger had engaged in a publicity stunt, rather than that disabled passengers should expect reasonable accommodation when traveling rather than discrimination.

The passenger, Kijima Hideto, had been visiting Amami Oshima, a small island and resort area in Kagoshima Prefecture in southwest Japan. Kijima had flown to the island from Osaka in central Japan, where he lives, using Vanilla Air, a low-cost carrier that is a wholly-owned subsidiary of All-Nippon Airways (ANA), one Japan's two main airlines.

The airport on the island is quite small, and passengers must climb a flight of stairs from the tarmac to board the plane. While Kijima, who uses a wheelchair for mobility, was able to make the trip to Amami Oshima and disembark from the aircraft with the assistance of friends, when trying to board his return flight home on June 5, Vanilla staff told him they could not assist him onto the plane. Staff also prevented Kijima's friends from carrying him up the stairs. A worker allegedly told Kijima he could board the plane if he could “climb up the stairs on his own without the assistance” of people travelling with him.

At that point Kijima reportedly decided to crawl up the stairs himself. What the Vanilla Airlines staff at Amami Airport may not have realized is that Kijima heads Japan Accessible Tourism Center, a non-profit aimed at promoting travel for disabled people in Japan, and has used 200 airports in 158 countries.

Image caption: “How the passenger crawled up the aircraft stairway.”

In today's paper: Passenger prevented from boarding aircraft belonging to low-cost carrier Vanilla Air. “If you can't walk, you can't board,” says airline employee, passenger forced to climb stairway on his own; passenger says he is not the first (to have been treated this way by Vanilla Air). […]

Following his return to Osaka on June 5, Kijima penned a blog post about his experience that he also posted to his personal Facebook page, and described his experience at the hands of Vanilla Air as a violation of his human rights (“バニラエアの奄美空港は人権侵害です”).

He also pointed out, using screenshots from the airline's website, that Vanilla Air promised on its webpage that disabled passengers would be accommodated, which was not his experience at Amami Airport. The problem was that, although Amami Airport has a level bridge that makes wheelchair access possible when boarding, it was in use with a different aircraft when Kijima arrived, and when he attempted to board the plane to depart.

Over the next few days, Kijima continued to work at getting the word out about his experience attempting to return by air from Amami Oshima, eventually connecting with an official in the Osaka government tasked with implementing the prefecture's law concerning the discrimination of people living with disabilities (障害者差別禁止法). Vanilla's flights to Amami Oshima depart from an airport in Osaka Prefecture, and, according to Kijima, thanks to an intervention by the Osaka prefectural government, by June 16 the low-cost airline promised to install a lift at the island airport making it possible for disabled travelers to board the aircraft.

Don't ever give up and cry yourself to sleep! It turns out that by November a second bridge will be installed at Amami Airport. Once that's completed it will no longer be necessary to climb up stairs (to board the aircraft) and the mobility problem will be solved.

However, by June 28 Kijima's story was being reported by Japan's national media. Vanilla Air made a public apology to Kijima, while Osaka and Kagoshima prefectures pressed the airline to immediately accommodate disabled passengers at Amami Airport, which it has agreed to do.

Besides generating national and international headlines, Kijima's experience has also received a lot of attention on social media. A blogger with the username Cocochan, writing on Naver Matome, a blog and social media aggregation site, collected a number of responses to the story, some positive towards, others skeptical of Kijima.

Some wondered why Kijima hadn't ensured he could board the plane when he made the reservation:

“Kijima Hideto, who does not have the use of his legs, relies on a wheelchair. On June 3, he traveled to Amami Oshima with his friends using Vanilla Air, a low-cost carrier.”

Why didn't he notify the airline in advance when he was making his reservation that he uses a wheelchair?

While people have been bashing the person at the center of the Vanilla Air controversy because in the past he wrote on his blog that “I purposefully did not disclose that I was traveling by wheelchair,” but if you read the article he explains why. He says that if notified (staff) about his wheelchair he would be denied boarding and it would just have created a lot of trouble.

As a barrier-free travel consultant, Kijima also argues that, based on the concept of “reasonable accommodation”, there should be no need for disabled people to determine whether or not they will be accommodated in advance:

Why is Japan's implementation of “barrier free” so excessively luxurious? This view that it has to be so special, and cost so much, is a big reason why it isn't making progress.

It's not about looking for something that will satisfy everyone (the lowest common multiple), but about a realistic and cost effective compromise (the highest common factor). Let's think in terms of “reasonable accommodation”.”

According to the United Nations Convention on the Rights of Persons with Disabilities (CRPD), “reasonable accommodation” means “necessary and appropriate modification and adjustments not imposing a disproportionate or undue burden, where needed in a particular case, to ensure to persons with disabilities the enjoyment or exercise on an equal basis with others of all human rights and fundamental freedoms.”

According to Nagase Osamu, a disability rights expert and a former representative for the disability rights group Inclusion International for the Asia-Pacific region, who was interviewed by Global Voices for this article, Vanilla Air's treatment of Kijima violates both existing Japanese law and the UN Convention on the Rights of Persons with Disabilities.

“Vanila Air's policy not to let people who do not walk fly seems a violation of the Act to Eliminate Discrimination Against Persons with Disabilities and the CRPD, which Japan has ratified,” said Nagase in an email interview. “If there was no accessibility, the airline was expected to provide reasonable accommodation, though as private company it is only encouraged to do so. This really proves the necessity to promote general accessibility and to secure reasonable accommodation in specific situations.”

David Chart provided a translation for this article.