Slimmed Down Garvey Sculpture Gets Thumbs Down From Jamaicans 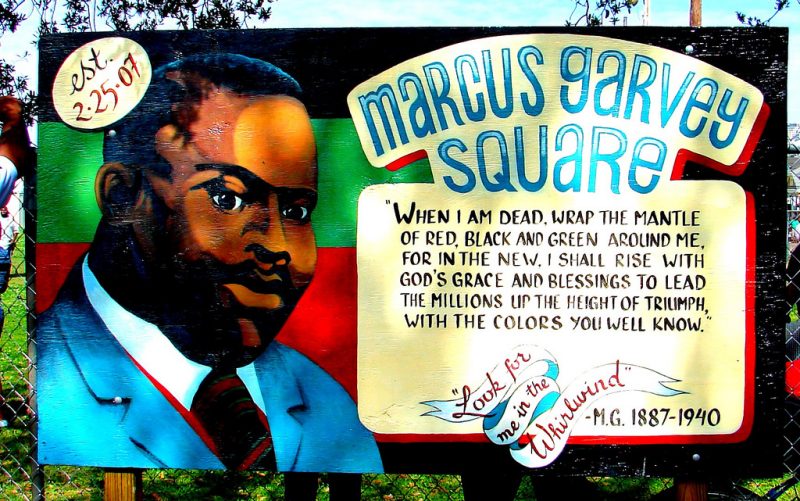 “A people without the knowledge of their past history, origin, and culture is like a tree without roots.”

These famous words were spoken by Marcus Mosiah Garvey, Jamaica's first and probably most revered national hero. The words of the Pan-Africanist figure who influenced the black nationalist movement are often quoted, and his face is familiar to most Jamaicans, to whom he is symbolic of strength, self-respect and racial pride.

However, a recently unveiled bust of Garvey provoked a huge wave of protest, both on social media and in the streets. To naysayers, the bust simply did not make the grade.

Jamaicans have generally been ambivalent — and often downright dismissive — about public statuary, especially when it comes to iconic Jamaicans being portrayed. In 1981, following Bob Marley's death, a nine-foot tall, impressionistic statue of the musician created by the late Christopher Gonzalez was soundly rejected by the Jamaican government that had commissioned it, as well as by the Marley family. It was never officially unveiled, and stood at the National Gallery for nearly 20 years before it was moved in October 2002 to the Island Village theme museum in Ocho Rios. A representational statue by Alvin Marriott was erected near the National Stadium in 1985.

The people of the eastern parish of St. Thomas were also generally not amused by a statue of another national hero, Paul Bogle, by esteemed artist Edna Manley, which stood outside the Morant Bay Court House. It was erected in October 1965 and declared a national monument by the Jamaica National Heritage Trust on April 3, 2003. Part of the problem with Bogle is that, unlike Garvey, there is only one image of him, contested by some. However, that statue has also been removed (its current whereabouts are not clear).

So, why was the latest Garvey bust, which was unveiled on May 19, 2017 at the University of the West Indies’ Mona campus, so roundly rejected? For a start, it did not even look like him, Jamaicans declared; Garvey has always appeared in photographs as somewhat rotund, with a plump face, whereas sculptor Raymond Watson's depiction was of a lean-faced man with cheekbones.

Well-known pastor Sean Major-Campbell posted, “Be honest! If you were asked, “GUESS WHO?” Would you have guessed Marcus Garvey?”:

He compared it to a photograph of Garvey:

Round head. Short face. Broad nose. Strong chin. No puckered mouth. Am I right or am I right?

One Jamaican observed in a television “vox pop”:

“It need more identity to prove that it is Marcus Garvey,” says this man. I think many would agree. @djmillerJA #TVJAllAngles pic.twitter.com/ORBdKzBPQF

People are expressing what the “Garvey” bust is “saying to them”. Listen to them. This piece is not giving the right message.??

University-based blogger Annie Paul suggested this was “Garvey Lite.” And why a mere bust?

For me, the problem wasn't so much that the bust didn't look anything like the Garvey we feel we've come to know and love. It's the scale and unambitious scope of the representation that bother me. The only other lifelike sculptures on campus are of Mahatma Gandhi (Indian) and Philip Sherlock (white), both full-body representations. Then for the champion of black identity, you have a modest bust. It's a problem, to say the least.

In the weeks since the unveiling, calls have been mounting for the removal of the ‘fake’ statue of Garvey. The Gandhi and Sherlock sculptures were gifts to the university, and it may be that those who feel strongly about this might have to undertake to commission a better representation of Garvey that can be situated at the UWI or some other location.

In future, any public commissions of art should be informed by the well-documented history of responses to public monuments in Jamaica. Edna Manley lecturer and first Stuart Hall Fellow Petrina Dacres has written an entire thesis on the subject. There is no excuse to be caught by surprise like this. Contrary to what many seem to think, commissions of public statuary are not occasions for artists to wield artistic licence and express themselves as they would with work meant for a gallery or private setting.

The messages flooded in from members of the public. Some were very amusing and expressed in typical Jamaican fashion:

Now On: Yasus Afari and the need for critical thinking to remove the #FakeUWiGarvey bust and provide redress pic.twitter.com/1M8gIIAPMk

Not everyone agreed that the bust was a disaster. Its creator, art teacher Raymond Watson, was naturally upset by the response, saying that he meant no disrespect to Garvey. Journalist Erica Virtue suggested in her weekly video commentary that Jamaicans have no imagination, and therefore cannot appreciate a different interpretation of Garvey.

A group of Rastafarians — for whom Garvey has a particular significance — protested vehemently at Papine Square, near the University campus:

The university called security to protect the statue:

Update:
Heightened security now mounted around the Bust of Marcus Garvey at the UWI.

Outspoken university professor Carolyn Cooper joined the Rastafarians in Papine. She wrote in her column:

Our images of Garvey have been mostly defined by photographs. We trust that they are accurate. But long before Instagram filtering, photos have been touched up, often to remove melanin. At the unveiling, Professor Rupert Lewis, eminent Garvey scholar, declared in a conciliatory tone, ‘There are many images of Garvey that you can get from his 52 years.’

True! Unfortunately, Raymond Watson's image of Garvey reveals nothing of the authority, passion and power of more full-bodied representations of our national hero. But Garvey seems poorly. His posture conveys passivity. He looks like a weakling. Who approved this diminished portrayal?

The bust should be replaced with an image that inspires unequivocal admiration of Garvey's accomplishments as an illustrious pan-Africanist rallying the black world to affirm pride in race.

The Rastafarians’ protest may have been the last straw. After considerable public pressure, the University of the West Indies has decided to remove the offending Garvey bust, promising to replace it before the new academic year begins.

In a poignant postscript to the controversy, one Jamaican wrote to the newspaper that Jamaicans still do not properly recognise their national hero:

Today, with the 130th anniversary of his birth fast approaching, it seems that all there is to remind us of Garvey is his image on our currency and statues which may not ‘fully represent him’. Garveyism is yet to be taught in schools on a full-time basis; books by Garvey are not necessarily national bestsellers; and worst yet, how we treat each other, as children of Africa, is approaching utter disdain.

Black pride, as well as self-pride, is seemingly on the decline. With all of this staring us in the face, there are more worrying things to be alarmed about than a statue.

There is now more than a hint of anxiety over a sculpture of a more modern day, unofficial hero: sprinter Usain Bolt, and possibly other champion athletes. Is another “statue controversy” brewing? Culture Minister Olivia Grange sought to reassure Jamaicans in a tweet:

Don’t be alarmed by false reporting. Watch this space for the real statue of the Legend @usainbolt #Jamaica55 @Jamaica55th @CGESJA pic.twitter.com/DJ2OFecrer

Sculpting is not an easy task. The technical dynamics are not unknown to us. Over the years, some Jamaican master artists have shown that they know their stuff.

One challenge which has dogged nearly every sculptor, however, is differing public tastes. An artist’s representation might be, to him or her, a task well done, an accomplishment achieved, but at the same time, onlookers can ‘dismiss’ the finished product. ‘Beauty is in the eye of the beholder,’ the purists said in literature. What Person ‘A’ sees and showers with praise, Person ‘B’ treats with scorn and outrage.

How often do you see a statue that looks exactly like the subject? What will be the reaction this time around?

So where will the rejected Garvey bust be relegated to now? It will languish in a quiet corner somewhere, and likely be forgotten.