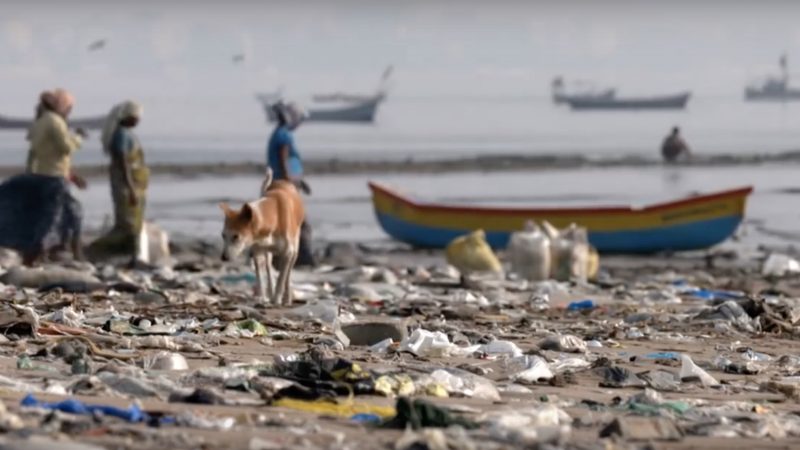 Plastic waste on a Mumbai beach. Screenshot from YouTube video “How plastic in the Ocean impacts your health” by Sky News. Click the image to watch the report.

Mumbai is situated on the western coast of India and is the most populous city in India. The city is known for its beaches, but piles of trash and sewage contamination have made them unsafe for visitors in recent years.

Some are more polluted than others. In a study of nine Mumbai beaches between November 2015 and May 2016, Juhu, Versova and Aksa were in the worst shape.

Nearly two years ago, residents of Versova, an upmarket neighborhood in Mumbai, decided to take matters into their own hands, inspired by Mumbai-based lawyer and environmentalist Afroze Shah.

In October 2015, Shah moved to his new apartment near Versova beach and noticed plastic waste on the beach, reaching 5.5 feet (1.67 meters) high in some portions. He and his 84-year-old neighbor, Harbansh Mathur, began to clean up the trash. Seeing their efforts, dozens of locals joined as volunteers and about 50,000 kilograms of waste was removed during the first clean-up on the 2.5-kilometer shore.

Still tons of waste needed to be removed, so they launched a weekly clean-up drive inviting more volunteers.

By December 2015, the local authorities provided tools such as garbage trucks and excavator machines for the volunteers and the drive transformed into a movement over the next six months. The volunteer base grew to 300 participants a week from all walks of life. Soon, the Versova Resident Volunteers (VRV) group was formed and they updated their progress regularly on Facebook.

In July 2016, VRV’s efforts were recognized internationally as the United Nations Environment Programme (UNEP) called it the “world’s largest beach clean-up in history”. By January 2017, the group started cleaning the 52 toilets near the beach to stop sewage from ending up in the sea. By March 2017, VRV had cleared 5 million kilograms (5,000 metric tons) of trash from Versova beach alone.

This is versova beach an hour back. Week 85 of cleanup.Versova beach is gorgeous and clean now.we have done our bit.We need to maintain it. pic.twitter.com/98q9RD5aAg

And that's some view !

Couldn't believe this is exactly the same beach which I visited last year and my friend was like, man, its so dirty. pic.twitter.com/EgFErIirm8

And the volunteers are still at it:

Week 88 cleanup ends. 300 fully grown coconut trees get their home at versova beach .Wonderful weekend .We go back to our roots. pic.twitter.com/BlI0Pjbz5E

Week 90 of the cleanup ends. Saturday and Sunday , we picked up 160 tons of plastic . Lashing rain and lashing temperament of volunteers. pic.twitter.com/KFiZwy0x4Z

The UNEP recognized Shah’s achievement by making him a Champion of the Earth, the United Nations’ highest environmental award.

This man's mission to save a beach made him a champion of the #Earth https://t.co/lzfhvu2n1F

The initiative is spreading. This one is from the Kahn (Khan) river cleanup in Indore, about 600 kilometers from Mumbai:

And people are wanting more:

@AfrozShah1 bro I think we need a mass movement across Indian coastal line like Mumbai cleanup,u can make a big change with ur popularity

After Versova, will these beaches in Maharashtra also get a clean-up? @htTweets identifies some of the worst!https://t.co/gdebx6KHmW pic.twitter.com/YXu5gwgQRL

According to the UNEP, 13 million tons of plastic waste end up in the world's oceans every year and the world needs to act now. People now have a successful example in Versova beach, but many more steps are needed to reduce plastic wastes and make waste disposal more efficient.