A collage made of the cover photo from the Facebook page of the Temelín Nuclear Power Plant Info Center and a screenshot of the removed photo album about the competition for intern.

Czech Temelín Nuclear Power Plant became the target of worldwide backlash over a publicity stunt that saw several young women posing in swimsuits and hard hats as part of a supposed competition to win an internship.

The largest nuclear power station in Czech Republic invited Facebook users to select their next intern by “liking” their photo, but accusations of sexism soon followed. After Germany's international broadcaster Deutsche Welle published an article about Temelín's competition, it was picked up by numerous international media. While posting photos of the girls, the UK's The Sun newspaper also reported on the international outrage, while American tech news site CNET used the case to show that “sexism has become quite the topic in the tech industry.”

The plant eventually removed the photos of the high-school graduates, declared that all participants had won the internship, and apologized: “The purpose of the competition was to promote technical education. But if the original vision raised doubts or concerns, we are very sorry.”

Temelín become famous! Their somewhat sexist competition of girls in swimsuits was featured on Time and CNN…
On their Facebook page (@ICTemelin), they somehow misplaced the competition, and instead there is something like a halfhearted apology. Moreover, they do not seem to understand that “looking good in a swimsuit” is a poor “qualifying criterion” for internships.

The plant's decision to take down the album not only removed the photos from Facebook, but also from media coverage that had embedded the album in their article instead of relying on screenshots.

Local TV channel Jihoceske had also published a video report on the models touring the power station during the competition's photoshoot. After Deutsche Welle embedded it in their article and the backlash began, Jihoceske made the YouTube video unavailable.

Not all reactions to the controversial competition have been negative. A German company which is a supplier to Temelín power plant tweeted out one of the photos that also shows some of their products:

So beautiful, nice construction, perfect skin. I talk about the #IBS penstocks on the left! Part of foto shot in Czech power plant Temelin pic.twitter.com/kwd73Hp9Dx

While the swimsuit competition put Temelín in the global spotlight, the plant has relied on the beauty of young women as part of its promotional strategy before.

They are one of the main partners of the competition “Female High School Graduate of the Year“. As part of the preparations for this beauty pageant, the teen finalists get to visit the power plant, as shown in the following video:

This year's internship competition was done in cooperation with the “Female High School Graduate of the Year,” as shown in the byline and title of the Facebook photo album. It is, in fact, a version of a similar competition from 2016, although it's not immediately clear who the winner of that contest was (if there was a winner at all). 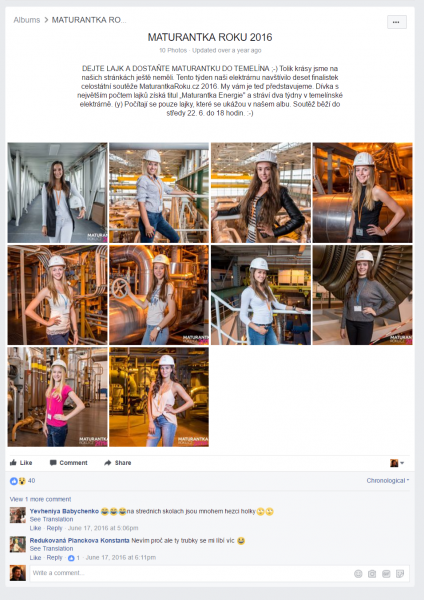 A screenshot of the Facebook page for Female High School Graduate of the Year 2016 – Temelin Nuclear Power Plant Intern Competition. (Click to enlarge)

There are some major differences however. Even though they are shot in modeling poses, the girls of 2016 did not wear swimsuits. The 2016 album has 40 likes and 3 comments.

Compare that to the much-criticized 2017 album, which generated 901 likes and 697 comments by the time it was removed.

And while the comments on the 2016 photo album are quite favorable, ranging from “there are many beautiful girls in our high schools” to “will you publish more competitors?” Google Cache shows that the comments on the erased 2017 album were mostly disapproving, like the following from a Facebook user named Martine Jenah:

What a joke! Do we make men pose in swim suits to get hired as interns? Still the same sexist bullshit in 2017!!!!! Your company is a joke! Women are not bodies to be leered at. They have brains and knowledge, you morons!!!

Some international media have noted that the origin of the name of the bikini swimsuit actually comes from Bikini Atoll, a nuclear bomb testing site. They attempted to draw some sort of meaningful connection between this bit of trivia and Temelín as part of the nuclear energy industry. Others have drawn comparisons with a 2015 contest for flight attendants in China, which required the candidates to pose in swimsuits too.