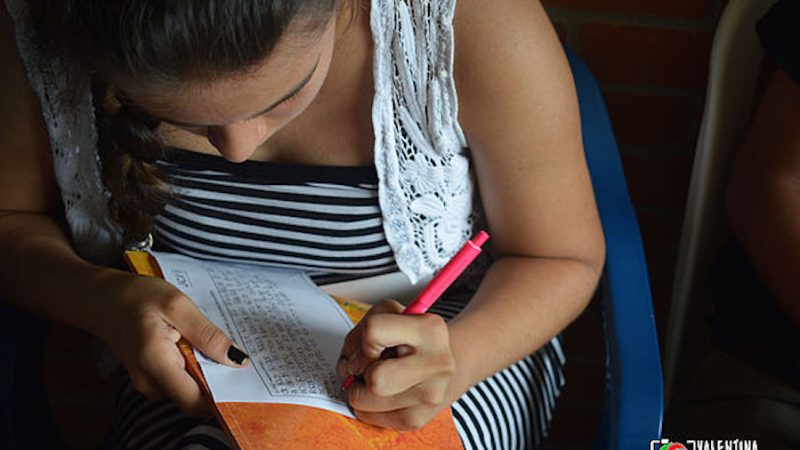 The following is an edited version of the piece “Love Letters to Guerrilla Fighters” that was originally published on Tea After Twelve. It is republished here as part of a partnership with Global Voices.

Why do we only send love letters to people we know? Isn’t it much more important to show affection for those who feel rejected? This idea haunted Colombian youth activists Leonardo Párraga from the BogotArt Foundation and Cristian Palacios from the Young Youth Foundation, and served as their inspiration in founding Cartas por la Reconciliación (Letters for Reconciliation), a campaign that encourages young people to send letters to guerrilla fighters.

A historic event had recently taken place in their country, and they wanted to do their part: After years of negotiations, the Colombian government had reached a peace agreement with the FARC (the Revolutionary Armed Forces of Colombia), thus ending Latin America’s longest-running armed conflict.

Internationally, the signing of the peace accord was considered such an important step that President José Manuel Santos received the Nobel Peace Prize for his efforts. But there is still a long way to go before true reconciliation and peace have been achieved. Guerrilla fighters — people who have lived in illegal camps for years, who have been exposed to the rhetoric of war and have kept their weapons by their sides 24/7 — will now somehow have to integrate into civilian life. And Colombian society, accustomed to an abiding fear and, in some cases, a deep hatred for the guerrilla fighters, will have to accept them back and support them in setting up new lives.

Leonardo and Cristian were convinced that Colombia’s youth had to come together and help the reintegration process along. And they have: So far, thousands of young people have written letters – love letters to ex-guerrilla combatants, welcoming them back into society. Their aim is to write 6,900 messages, one for each former guerrillero, and hand them over personally.

The idea to found Cartas de Reconciliación was born at the World Summit of Nobel Peace Laureates in Bogotá in February 2017, when Leonardo and Cristian had an opportunity to briefly talk with 2014 Nobel Peace Prize Laureate Kailash Satyarthi. The laureate mentioned that we write tons of love letters to those we love on Valentine's Day, while forgetting the people most in need. His plan this year, he added, was to share love with those who needed encouragement most.

Leonardo and Cristian adapted the idea to the Colombian context, and came up with the plan to send letters of hope and support to the ex-combatants of the FARC now struggling to find their place and establish a new way of life. “The letters will show that Colombian society is ready to change the discourse from a narrative of war to a collective story of peace,” they say.

So far, the campaign has collected more than 2,000 messages, and the first 765 have been delivered. The initiative is active in all of Colombia’s biggest cities including Cali, Manizales, Medellín, Barranquilla and Bogotá.

‘I never thought there was anyone willing to forgive me’

The first 500 letters were delivered on March 19 at one of the UN camps in the Caldono-Cauca area. A group of 40 students from Javeriana University of Cali, two members of the Cali mayor’s office and Leonardo of the BogotArt Foundation travelled to the camp to personally hand over the letters.

The members of the FARC lined up the way they once did to receive orders from their leaders, but this time it was to receive letters of support from people all over the country. It was a highly emotional, moving moment for all involved. “It is incredible how many feelings you can go through in just a few hours, from fear to happiness and everything in between,” political science student Manuela Jiménez Avila stated afterwards.

Sandra Parra from the office of the governor of Valle del Cauca recounted the unforgettable experience:

After we delivered the letters, an ex-combatant showed me around in the guerrilla camp. When I looked at one of the ‘cambuches’ (basically a shack the guerrilla members are living in), I saw a guerrilla member writing something. I was afraid to enter because there was an MGL grenade launcher resting on the bed by his side like a lethal sleeping beauty. I spoke to him anyway, and asked ‘Hello, what are you doing?’ He replied, ‘I am answering a letter that someone wrote to me; it is very beautiful and hopeful. Nobody has ever written something so beautiful to me in my life, so that is why I am responding.’ Tears began running down my face. I hugged him tightly and sat down next to the grenade launcher. Perhaps it was tired of war too, of being his faithful companion for years, and wanted to help him write the letter. He told me more about his life, that he had never expected more from life than war, and that joining the FARC was the only way to keep him and his six brothers from starving. ‘I never thought there was anyone willing to forgive me for my mistakes, but now I know that there is a society waiting for us with open arms. So far, I have only known how to care for and hold weapons. But for peace, I can learn to do many things and work with dignity.

To open the event, students and some FARC leaders sat down for a discussion round. The students had grown up during the war when the FARC was already a clandestine organisation. So the FARC leaders explained their organisation’s history, their ideals and their point of view regarding the process of peace: “After years and years in which we have seen how the social injustice caused by the state has affected the entire Colombian people, we believe that this opportunity to move towards a political party will allow us to transform the country into a more equitable society. It is worth overcoming all the obstacles for an objective of this magnitude,” one of them said.

Hearing the reality of those voices who have never had a voice or a vote, and realizing that those that I often considered monsters, and even came to hate, were also actually human beings with beautiful feelings that were distorted by the environment in which they had to live and by the conditions that created them. That was deeply painful. The reality of the country hurts, but it is comforting to realize that all human beings, including those who have killed so many and caused so much damage, have something to teach us, plus a smile and a hug to give away.

Many ex-combatants have replied to the letters. Gustavo González, commander of the encampment in Caldono-Cauca, for instance, wrote the following lines to Cali’s Archbishop Darío de Jesús Monsalve:

Colombians had been led to believe that peace would arrive with disarmament. This is not the case. While we have inequality, hunger, and a lack of education, health, and job opportunities, there will always be someone who is ready to take up arms, to revolt and protest to reclaim their rights, and that is completely valid (…) Nowadays, in the FARC we are betting on peace, on politics without weapons. That is why we call on all the defenders of peace – regardless of race, religion or ideology – to rise above those who dream of a country at war. We give you our word, contribution, and sacrifice because we know first hand that nothing is easy, that there are many challenges for those of us who defend life as the cornerstone of existence. We will experience many obstacles, but we will succeed together.