The Rise of the Hirak Protest Movement in Morocco 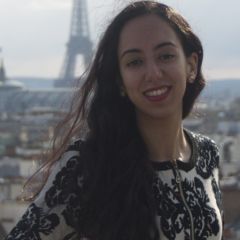 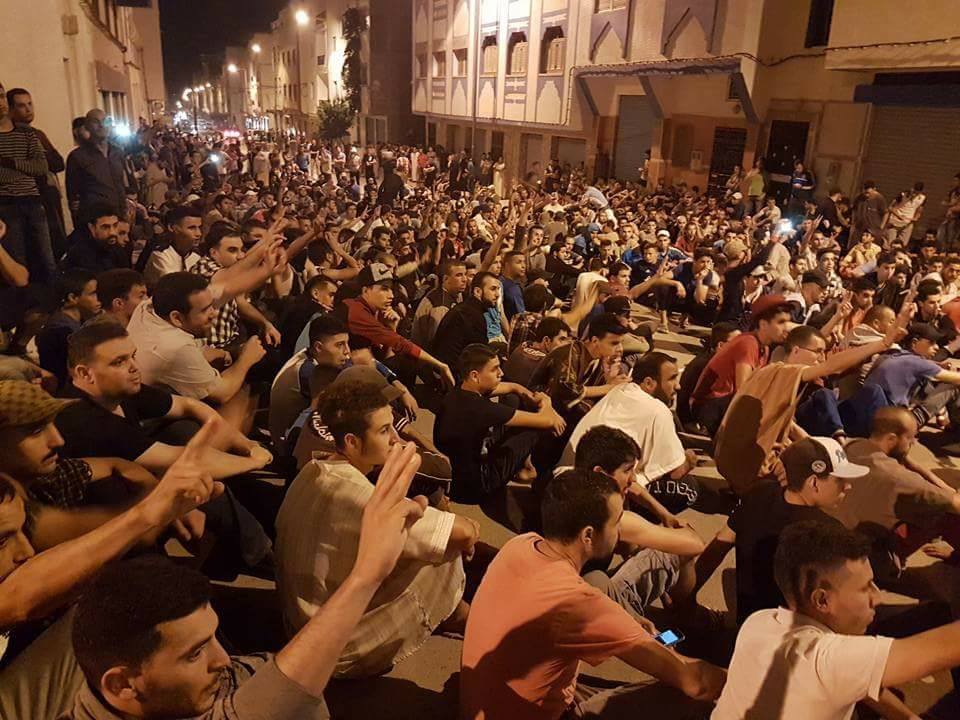 Local youth showing the Berber hand sign and doing a sit-in in Imzouren, 14km from the city of Al-Hoceima in the Rif region. Photo by AlhoceimasOfficiel. Used with permission.

Morocco has been facing waves of protests for several months.

In late October 2016, Mohcine Fikri, a fisherman in the northern Moroccan city of Al Hoceima, saw his 500kg catch of swordfish seized by the police.

As his merchandise was being crushed in a truck, he tried to save his only means of living and was crushed himself. Witnesses have said that the police did nothing when they saw Mohcine Fikri throwing himself in the truck which led to his death.

Even worse, and that was the starting point of the protests, the police allegedly told the truck driver in charge to “crush the hell out of him”.

An open conflict between civil society and the local authorities and police forces over the sequence of the events soon started and protests have been raging in the northern Rif region in Morocco since then.

Even though Fikri's death caused national uproar and nationwide protests, the weekly protests initially took place only in Rif before spreading out to the rest of Morocco in the past few weeks.

They are finding echo in the general discontent in the population regarding the lack of economic opportunities, failing or non-existent infrastructures and creeping corruption that were highlighted through the government's treatment of this issue.

Indeed, after national elections took place on November 2016, and new political parties came on the political scene, Morocco witnessed one of its first political deadlocks, lasting for months.

This came at a crucial moment as authorities were already facing popular wrath.

But it's the lack of any governmental reaction, perceived as representing the general apathy of authorities, which made the situation worse.

Authorities denied protesters’ demands and smeared them as foreign agents hired to destabilize Morocco instead.

The Rif region, mainly inhabited by the indigenous Berber minority, has long been seen as a region historically hostile to the central power, also known as Makhzen.

In the beginning of the 20th century, the Rif tribes were unified under the leadership of the Riffian political and military leader Abd el-Krim and fought both French and Spanish colonization of Morocco.

They ended up declaring the independence of the Rif Republic (1921-1926) following the Moroccan Sultan Yusef's decision to surrender and sign a treaty with France which officially turned Morocco into a French protectorate.

This move is still largely not taught in Moroccan curriculum and largely misunderstood.

Because of that, people skeptical about the protests, or the “Hirak” as the movement is called, were quick to question the presence of several Rif Republic flags and in parallel, the lack of Moroccan flags. They thus labeled the Hirak an ‘unpatriotic movement’ on social media despite the Hirak movement denying any separatist intentions and arguing for its economic and social grievances instead.

For example, one of the main demands of the Hirak is to have a hospital specialized in cancer treatments as cancer rates in the Rif are the highest in the country, dating back to Spain's use of mustard gas in the region.

Although the new king took a different stance than his father by liberating political opponents, putting in place new institutions to promote national reconciliation, and regularly visiting the Rif region, these were not enough to make the locals forget the violence and repression their people endured in the past century.

Six years after Morocco's Arab spring, also known as the “20th of February” movement, authorities are struggling to cope with new popular grievances.

Back then, authorities implemented some reforms to ‘calm’ protestors. The constitution was amended, new institutions were put in place and many promises were made to the civil society in terms of economic and social development.

But now, this strategy is running out of steam after several years of stagnation, and political parties are failing to come up with new strategies to address popular anger.

And because of the lack of any long-term or even short-term vision from the ruling political class, the protests kept going strong, and one figure in particular managed to stand out from the crowd: the self-proclaimed leader of the Hirak movement, Nasser Zefzafi.

The 39 year-old Al Hoceima-born and raised Riffian has earned the reputation of being a very staunch and vehement activist, gathering sometimes thousands of people coming to listen to his speeches, all of which would be live-streamed on social media.

He gathered a core group of protestors around him and kept the movement alive and lively, all the while calling for all protests to remain peaceful.

However this all changed when on May 26, 2017, Nasser Zefzafi interrupted the last Friday sermon before Ramadan at a local mosque.

The imam was preaching against “fitna”, a religious label used to designate any move whose goal is general disunion and the promotion of enmity between different people among a united group, without a doubt a reference to Zefzafi and the Hirak movement.

Under the laws aimed at protecting all religions, any act that disrupts or infringes on the regular and normal practice of any religion in Morocco is a crime, and the police forces started a manhunt to arrest Zefzafi.

Zafzafi was hidden by locals for a few days before finally surrendering to the police against popular wishes.

Following this event, police forces and authorities unleashed a massive campaign of arrest and have put in custody more than 130 activists to this day. More than a dozen activists, including Zefzafi, will ‘face justice’ for what local activists and human rights defenders have called outrageous charges, almost all related to threatening national security.

Following this complete reversal of strategy and the new repressive approach by the authorities, massive demonstrations have taken place throughout the kingdom, most notably in the capital, Rabat, on June 11, 2017, where around 52,000 people took to the streets to protest in support of the Hirak and against the massive arrest of activists.

Authorities claimed it was only around 15,000 people whereas the Hirak claimed more than 100 000 joined the protest, which would make it the biggest protest in Morocco since the 20th February movement during the Arab spring.

Many fear that the absence of the Hirak's leaders, all arrested, might make things worse as they were the ones who contained it for months.

On June 22, Zefzafi was ‘severely beaten‘ along with two other activists during their arrest, so it does not look like this story will end anytime soon.