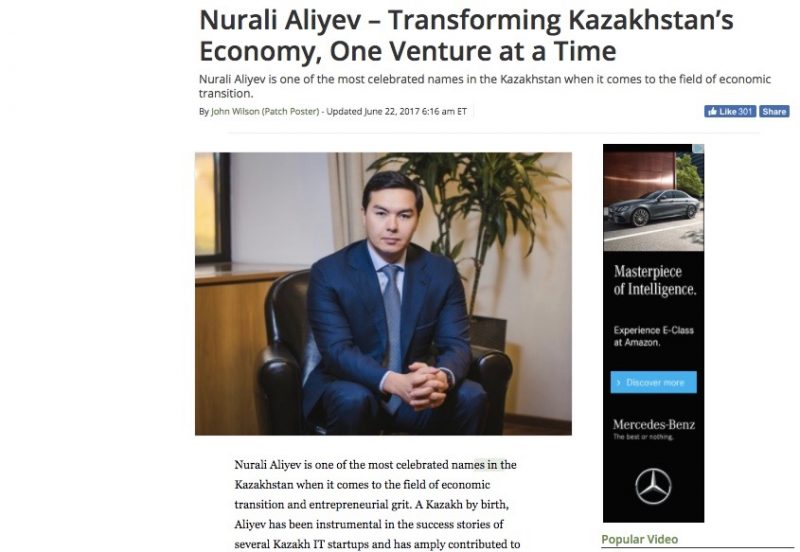 Screenshot of article ‘Nurali Aliyev – Transforming Kazakhstan’s Economy, One Venture at a Time’ on Patch.com.

Facebook users in Kazakhstan are mocking an apparent PR piece that first appeared on the website Patch.com.The piece focusses on the achievements of “self-made man” Nurali Aliyev, the 32-year-old grandson of long-reigning Kazakh President Nursultan Nazarbayev.

The article, authored by a Patch.com poster “John Wilson”, is so embarrassingly misleading that it almost reads like a parody of political puff. At no point during the piece is Aliyev's status as a blood relative of the endemically corrupt, oil-rich Central Asian country's 76-year-old leader even mentioned.

The article introduces Aliyev as “one of the most celebrated names in the Kazakhstan when it comes to the field of economic transition.”

Absurdly, the author of the article then makes a point of highlighting in bold the expression ‘self-made men’, despite the fact that anyone who knows anything about Aliyev knows that he is anything but self-made.

Nurali Aliyev is one of the most celebrated names in the Kazakhstan when it comes to the field of economic transition and entrepreneurial grit. A Kazakh by birth, Aliyev has been instrumental in the success stories of several Kazakh IT startups and has amply contributed to the economy by spearheading several institutions and organizations in the country.

But, this man’s story has had humble beginnings. As with most self made men, Nurali Aliyev started his education in professedly ordinary universities and schools. Pursuing an education in Finance and Marketing, Aliyev quickly realized his career path and started working towards his goal of gaining enough knowledge and experience to help his own country’s dwindling economy.

Several quotes attributed to Aliyev are included in the piece, although it is not clear whether or not they are the result of an interview he gave to the author. At one moment in the article, the author refers to Aliyev as “the quintessential scholar”.

After providing a glowing assessment of his achievements as a magnate in the Kazakh sugar industry and as deputy mayor of the Kazakh capital Astana, the author signs off with a final foray into facepalm territory:

The economic policies of Nurali Aliyev have brought international recognition and while the man toils towards the welfare of Kazakhstan, his policies are something that every prominent person can emulate.

To eliminate any doubt, Aliyev's “beginnings” were anything but humble. Even at the time he was born Nazarbayev was one of the most important politicians in the then-Soviet republic. By independence in 1991 he was the country's undisputed leader, a status he has maintained up until the present day, against the background of an ever-expanding personality cult.

If Aliyev has any international recognition, it is most likely as a character figuring in the ‘Panama Papers’ leak, a giant data dump consisting of records belonging to the Mossack Fonseca offshore companies’ registrar.

According to the Organized Crime and Corruption Reporting Project that covered the leak extensively:

The documents show that Nurali Aliyev, the president’s grandson and [presidential daughter] Dariga Nazarbayeva’s son, had no second thoughts or conscience when deciding where to keep his money or register his luxury possessions.

Aliyev owned two companies registered in the British Virgin Islands, one of the world’s least transparent offshore destinations, and used the offshores for operating a bank account and a luxury yacht.

“Whatever he deserves, he has already taken”

A search of other articles penned by ‘John Wilson’ for Patch.com throws up similarly puffy efforts, including one titled ‘Anar Mammadov, Golf and Grand Prix – How Azerbaijan is Molding its Economic Landscape through Sports’.

Oil-rich regimes seeking self-promotion through paid-for-content in Western outlets (although there is nothing in the patch.com article that specifically indicates it was paid-for-content) is nothing new. Websites like Patch and Huffington Post, where editorial oversight is limited and where regular authors are effectively self-publishing, represent soft targets for such efforts.

The piece might not have triggered a public reaction at all had it not been so effusive in its praise for Aliyev, and so thoroughly ironic.

The article was subsequently translated into Russian by a local Kazakh website, without any additional commentary.

“It seems like this article was written by a freelancer from North Korea,” joked Facebook user Gleb Ponomarev in a comment underneath a public thread linking to the translated article, posted by journalist Gulnara Bazhkenova.

“We should give him what he deserves and name Almaty airport in his honour!” chimed Nazgul Zhumabayeva, indirectly referencing a recent decision to rename the airport in the capital in honour of Aliyev's grandfather, Nazarbayev.

“Whatever he deserves, he has already taken,” retorted Kairat Mukhtarov.

Several users posted puking memes under the same thread in response to the article's overboard praise of Aliyev.

Facebook remains a key medium through which local opposition to the authoritarian Nazarbayev regime can be expressed, albeit mostly only in humorous terms.

Media in the country remains tightly controlled, with anti-defamation legislation, official censorship and pervasive self-censorship combining to effectively prevent local journalists from investigating the ruling family and its business interests.