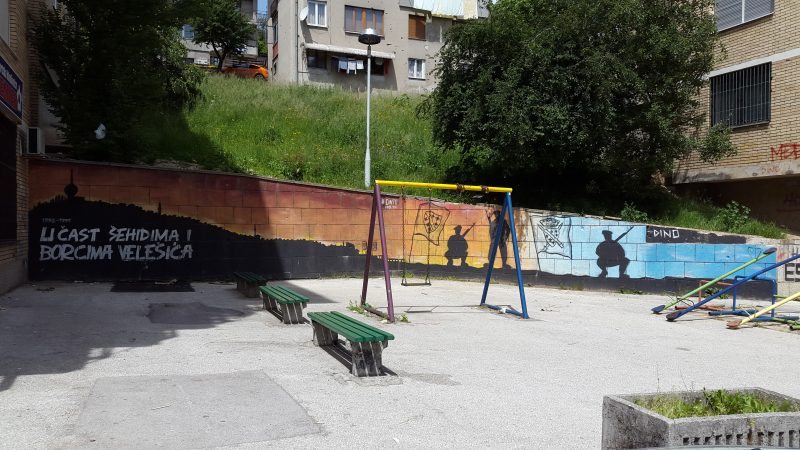 Memories of the 1992-1995 war are still fresh in Bosnia and Herzegovina. This mural next to children's playground commemorates the fallen from a Sarajevo neighborhood (its text reads “Honoring the Shahid and the fighters of Velešić”). By targeting its propaganda towards Bosnians, ISIS is trying to exploit the wounds from this war. Photo by GV, CC-BY.

In recent months, the militant group ISIS, which has brutalized large swathes of Iraq and Syria for a few years in the name of establishing a “caliphate,” has been increasing its propaganda aimed at the Western Balkans.

The countries of the Western Balkans — Albania, Bosnia and Herzegovina, Macedonia, Kosovo, Montenegro, and Serbia — are home to significant Muslim populations. By targeting its propaganda towards them, ISIS is trying to exploit the wounds of the Yugoslav Wars of the 1990s, which saw people divided along ethnic and religious lines.

On June 8, Al Hayat Media, a media outfit for ISIS (also known as ISIL, Daesh, and Islamic State) published the 10th issue of their online magazine Rumiyah. It was circulated in nine languages, including Bosnian, with each version providing customized content to their sympathizers in different regions of the world.

Rumiyah has always published in Bosnian, but this issue marked the first time it had a message specifically for citizens of the Western Balkans. In it, ISIS claims they have “not forgotten” the region where they would bring “blood for the enemies and honey for the friends.” The rhetoric is full of menace for the “infidel” Serbs and Croats, and reminiscences of war crimes against Muslims from the past wars. The message includes especially dire threats for the “murtadd”– a term meaning someone who has renounced their own religion or heretic — referring to the majority of local Muslims of Bosnia, Serbia, Albania, Kosovo and Macedonia who do not support any kind of Islamic radicalism.

While large numbers of Muslims also live in the other Balkan countries, ISIS announcements have not mentioned them, nor their capitals as future targets for their “soldiers, cutting the heads and shedding the blood of infidels, until they submit and pay tribute.” A Bulgarian Twitter user commented that they prefer it that way.

For the second time “the Islamic State” publicly neglects us as an enemy worthy of their attention. It's quite OK for me if they continue in the same vein.

Rumiyah is not their only effort to target local audiences.

New channels, mostly in messaging application Telegram, have also recently been created. All information they contain is in Bosnian, including videos, posters, translations of statements from ISIS, and other types of propaganda. One of the newest channels was created on June 8, on the day when latest Rumiyah issue was published. Currently, there are four major channels which are very active. 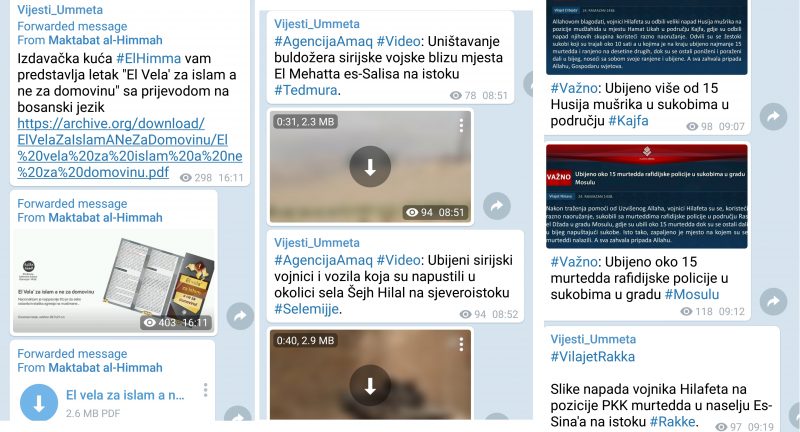 Screenshots from a Telegram channel conveying ISIS propaganda in Bosnian, including links to resources, videos from the battlegrounds, and links to other articles.

A painful legacy of war

Religious identity played a major role during the armed conflicts that raged through former Yugoslavia from 1991 to 2001. Nationalist politicians nurtured and exploited divisions across ethnic and religious lines, pitting against each other the former neighbors that used to live in “brotherhood and unity” (the official slogan of the broken federation).

Most Balkan nationalists use the religious identity of the majority of the ethnic group they claim to represent as part of their ideologies. Groups like these claim that to be a good Croat, one has to be a pious Catholic, for example, or only devout Orthodox Christian Serbs are worthy of the name, or that being a Bosniak is inseparable from being a Muslim. (Albanian nationalism is an exception — even though most Albanians have Muslim heritage, those of other faiths are not looked down upon by compatriots.)

During these wars, over 140,000 people lost their lives, and several million were forced to leave their homes. Numerous war crimes were committed in the name of “defense” of one's chosen ethnicity and religion, and the trials for some of them are still going on. Meanwhile, the fact that various politicians and media have bestowed heroic status on some war criminals does not inspire confidence among the neighboring peoples.

This historical heritage is continuously revisited for political mobilization, and as a consequence aggressive attitudes towards other religions is ingrained in some Balkan citizens.

Such ISIS propaganda isn't only aimed at recruiting new members, but also motivating sympathizers — some of whom have returned from fighting in Syria — to carry out attacks in the group's name, a call that could be made more potent given the recent history in the Western Balkans.

Balkan fighters started going to Syria in 2012-2013 after the Assad regime intensified its campaign against a popular uprising. Extremist groups presented these actions as an attack against Islam, even though the government's aim was not religious, but political, and exploited the opportunity to use the people's suffering as recruitment tool.

The following estimates combine the data published by authorities, as well as from reports by investigative journalists and think tanks, and my own personal reporting while working as a journalist. There are around 875 Western Balkan fighters in Syria and Iraq. Roughly speaking, between 90 and 200 are from Albania, between 217 and 330 from Bosnia, between 232 and 300 from Kosovo, between 100 and 146 from Macedonia, about 30 from Montenegro, between 50 and 70 from Serbia. There are also fighters from Slovenia and Croatia.

Many of these fighters belong to al-Qaeda's Syrian branch (known previously as Jabhat an Nusra, and today Hayat Tahrir al-Sham), and another part are among ISIS forces, in units lead by Albanians or Bosnians.

Some of the fighters coming from Bosnia originate in the Salafi communities such as those in the mountain villages of Gornja Maoča, Ošve and Dubnica. They are not result of missionary activity, but of settling of foreign fighters from the Bosnian War and their families.

From 1992 to 1995, hundreds of fighters from various Muslim groups fought on the Bosnian side, and afterwards some of them settled in remote villages to avoid attention. They were already influenced by the ultra conservative Islamic movement Salafism and for two decades have lived in peace resembling the Puritan communities of the 16th and 17th centuries in Western Europe. In each such village they created infrastructure to support community funding and spiritual development, including small businesses and religious education facilities. Salafist communities also have real estate and travel agencies that work mostly with Arab tourists.

When the war broke out in Syria, some of these families went there, drawn by the promise of building an ideal Muslim state with the creation of a so-called caliphate in 2014 taking advantage of the chaos of the civil war in Syria and the repressions of the Syrian government. It should be made clear that not all Salafi are militant, and many of them continue to live in Bosnia, accepting its institutions. 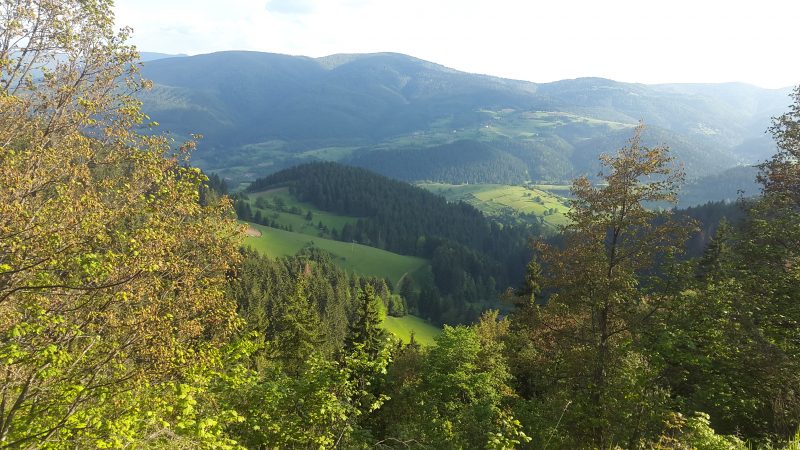 Bosnian mountains in the vicinity of Sarajevo. Some foreign veterans of the Bosnian War had settled in villages in the area, forming Salafi communities. Photo by GV, CC-BY.

Balkan fighters also include Albanians, some of whom have been recruited by a mosque that operates outside of the control of the Muslim Community of Albania (KMSH, Komuniteti Mysliman i Shqipërisë), the mainstream religious organisation founded in 1923. The number of Albanians going to Syria, however, decreased from 20 in 2012 to only one in 2015 after the country adopted special legal measures against such fighters, making recruiting, funding or supporting fighters punishable by 15 years in prison.

Authorities in neighboring Macedonia adopted similar measures in 2015, criminalizing participation in foreign conflicts and related financing with five years in prison. In Kosovo, meanwhile, security forces had been openly cracking down on jihadist activity since 2014, when they arrested a dozen suspects, including imams.

But the threat posed by citizens who return home after fighting in Syria or Iraq remains. ISIS military failures increase this possibility, as analysts believe that the organization could turn its focus on Central Asia, Southeast Asia and the Balkans, as important geopolitical areas with exploitable history of conflict and unresolved problems.