People Around the World Celebrate International Day of Yoga, an Ancient Indian Tradition 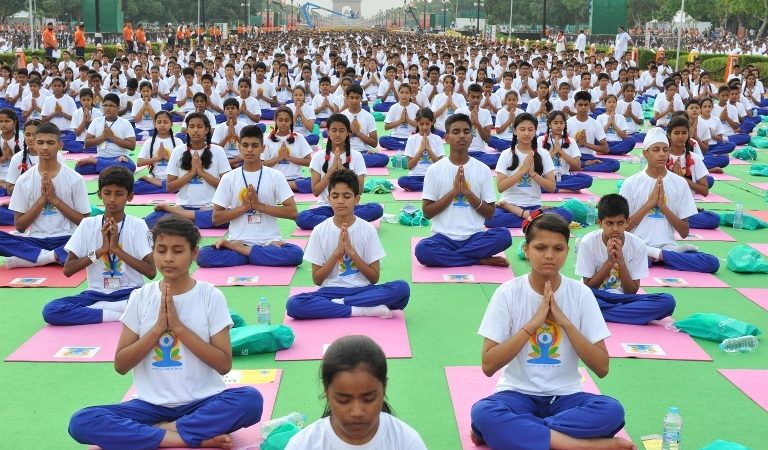 On June 21 this year, hundreds of thousands of people in more than 200 countries of the world celebrated International Yoga Day by practicing Yoga together in public. Social media spaces around the world were filled with images of people doing yoga and the hashtag #InternationalYogaDay was trending during the day.

Yoga can be viewed as a group of physical, mental, and spiritual practices or disciplines which originated in ancient India (between the sixth and fifth centuries BCE). Yoga gurus from India introduced the practice to the West in the late 19th and early 20th century and it is now a multi-billion dollar industry across the world. While in much of the Western world yoga is popular as a system of physical exercise, in India, it is much more than physical exercise; it has a meditative and spiritual core.

Many countries which do not know our language, tradition, or culture, are now connecting to India through Yoga. Yoga connects body, mind and soul. It is playing a big role in bringing the world together too. – Indian Prime Minister Narendra Modi, June 21, 2017.

In 2014, Narendra Modi became the 14th Prime Minister of India and started spearheading an initiative to reclaim Yoga as an historic part of Indian culture. In September that year, he made a call to other nations at the UN General Assembly (UNGA) for a day to celebrate yoga globally. In December 2014 a resolution was adopted in UNGA to mark June 21 as the International Day of Yoga, which has been celebrated across the world ever since.

In the same year, the Modi government cemented its focus on Yoga by appointing a minister for Yoga and traditional medicine. On December 1, 2016, Yoga was listed as part of UNESCO’s Intangible cultural heritage.

#Yoga, a heritage of the past and technologies of wellbeing for future. -Sg @UNESCO #CulturalHeritage https://t.co/U3jIIpfljg

Here are some of the images that came out of India today showing people from all walks of life enjoying the day:

A Guinness World record of largest yoga session of the world in Ahmedabad today #InternationalYogaDay pic.twitter.com/aTtrcACBE4

It was a great pleasure to perform #Yoga on 3rd #InternationalYogaDay with the enthusiastic people of #Howarh, West Bengal @moayush pic.twitter.com/DMWJAKoQ0R

Yoga was even used in a protest against the government:

This year the International Yoga Day expanded to even more countries in the world:

Over 3000 people participated in #InternationalYogaDay in Suva, Fiji. #IDYwithArtofLiving pic.twitter.com/riZPoGSEmF

Yoga is a light which once lit,will never dim.
A sneak peek of the iconic UN Headquarters building being lit on #InternationalYogaDay pic.twitter.com/jH5JaD9kLQ

Bollywood celebrities have also shared motivational pictures of themselves in Yoga poses on social media.

Yoga has always been a personal and individualistic practice, the meaning and benefits of which can only be determined by the practitioner. And this collective campaign of spreading Yoga to other countries of the world should bring tremendous benefit to millions of practitioners of this ancient Indian practice all over the world.