More Than a Year Later, Landslide Victims Scrape By in a Resettlement City in Myanmar 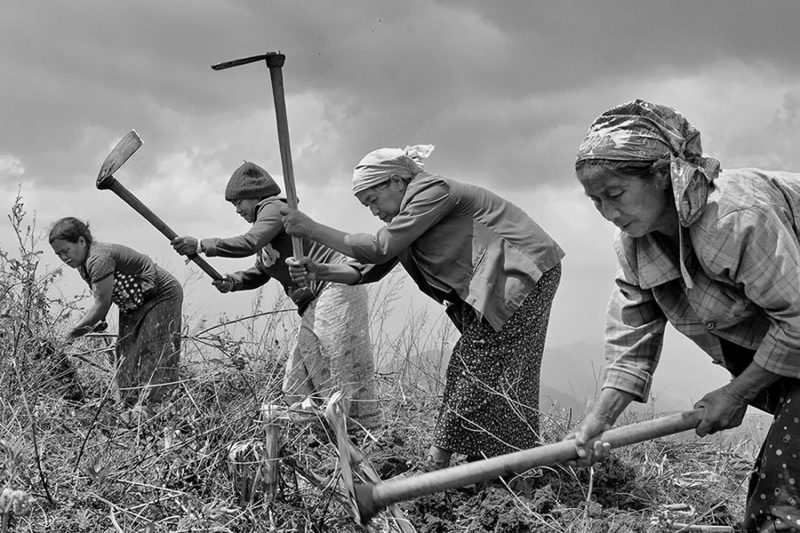 New City residents clear a small patch of land to grow corn and potatoes. The previous year, animals ate or destroyed all the food they planted. Photo and caption by Brennan O’Connor / The Irrawaddy

This article by Brennan O’Connor is from The Irrawaddy, an independent news website in Myanmar, and is republished by Global Voices as part of a content-sharing agreement.

Extensive flooding in remote western Chin State, one of the poorest areas in Myanmar, caused massive landslides in 2015. In capital city Hakha, the landslides displaced thousands, wiping out half of the city’s farmland.

Around six months after the disaster struck, the state government started providing homes to victims in a new neighborhood called “Hakha Thar” in Hakha dialect, or “New Hakha” in English. It is informally referred to as New City, located several kilometers from the city center.

But, more than a year after the resettlement, residents only just received power and still do not have running water. They are left to rely on collecting rainwater and deliveries from local aid groups.

Sang Vel’s home was located in the landslide zone. She and her family were evacuated to a relief camp where they lived for eight months. It was a tough time; she explained how they needed to procure their own blankets to ward off the frigid temperatures during the winter months. They were relieved to move out of the camp and into a new home. But after living in New City for a year without basic amenities, the family is growing increasingly frustrated.

Overlooking Hakha, New City is located on several of the highest mountains in town. Most houses are identical: small, square structures slapped together quickly with wood and aluminum siding. The roads connecting them are still unpaved. The frequent wind that blows through Hakha creates dust storms in New City.

Like most residents, Sang Vel and her husband Dan Tlang Ti Phul are unemployed. Before the landslides they sold vegetables to local merchants. But the money they made before is too little to consider commuting by bus into the city. Instead, they rely on their son, who stays permanently in downtown Hakha with relatives, to deliver goods with the family’s three-wheeler.

During a public town meeting in late 2016, the Chin State government promised that funds from the 2017 budget would be used to complete unfinished public works in New City. There are signs this is starting to happen. Residents recently received electricity, a large water storage tank is finished and roadwork is underway.

No livelihood initiatives for residents have been announced, however. Most of the landslide victims worked in agriculture before the landslides, but much of the farmland has been buried.

After facing difficulties securing stable jobs in the city center—work was already scarce before the floods—those whose land wasn’t destroyed have returned to their farms, at least for part of the week. Yet the area remains at risk of landslides during this year’s monsoon season. 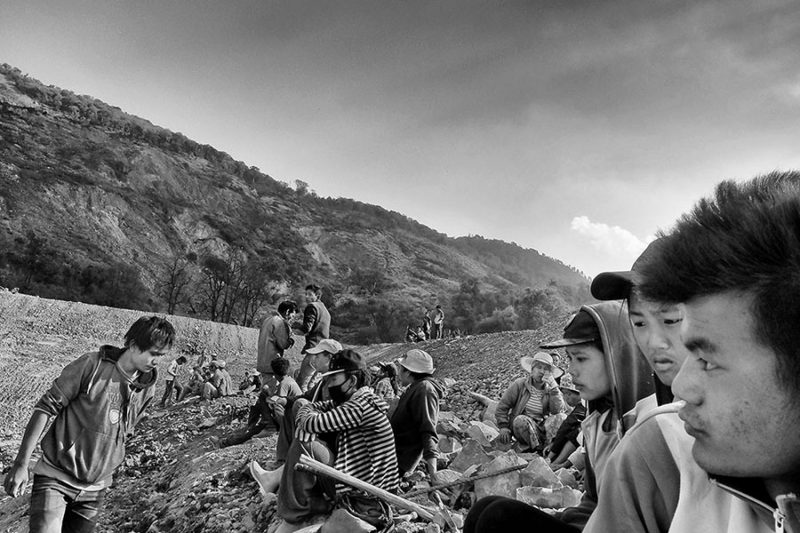 Workers wait to get paid for digging out a lake that was buried during the 2015 landslides. The lake will be used to collect rain for the city’s drinking water. Photo and caption by Brennan O’Connor / The Irrawaddy 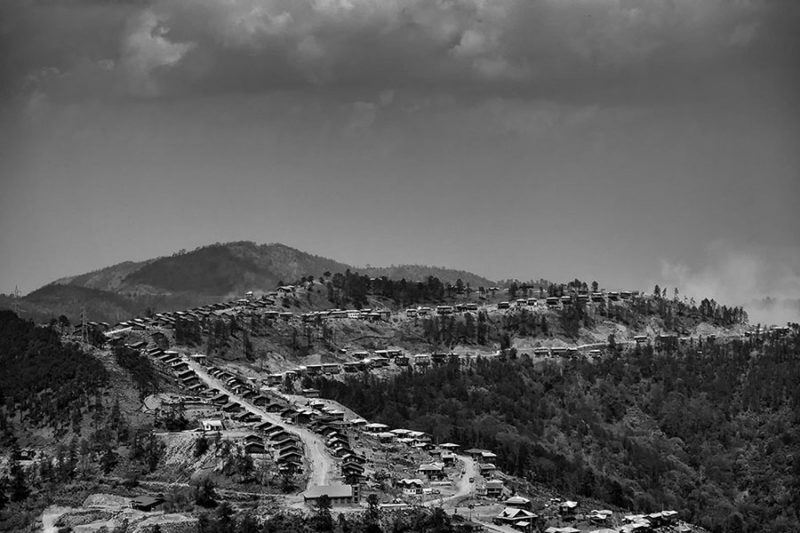 Located on steep mountain ridges that overlook Hakha, the New City remains unfinished after more than a year since it was built. Photo and caption by Brennan O’Connor / The Irrawaddy 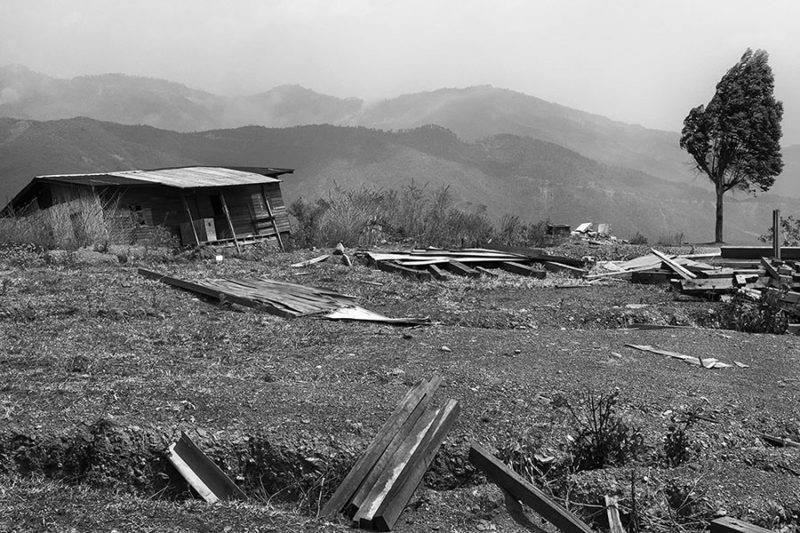 Landslides destroyed hundreds of homes in Hakha and half of the town’s farmland. Due to the loss of arable land many vegetables must be bought in by truck from other city centers in Chin State. Transport costs have resulted in higher food costs. Photo and caption by Brennan O’Connor / The Irrawaddy 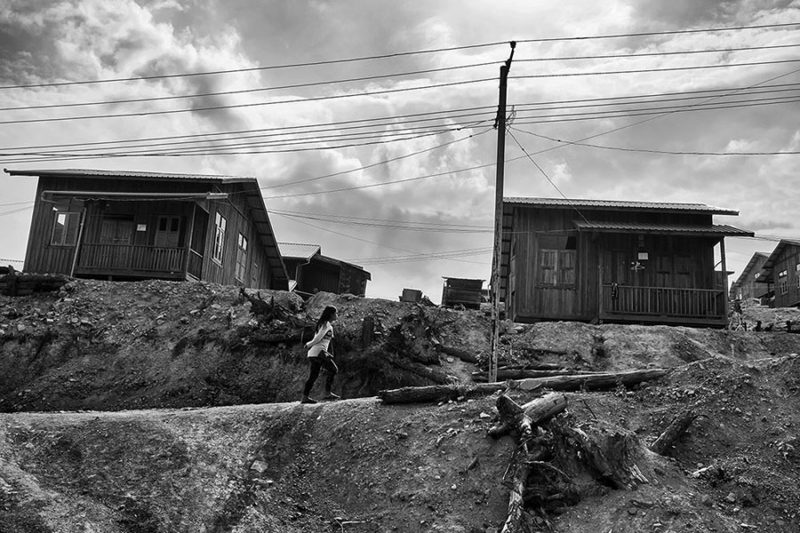 The government built around 1,000 homes in the new city for victims of the landslides. Photo and caption by Brennan O’Connor / The Irrawaddy