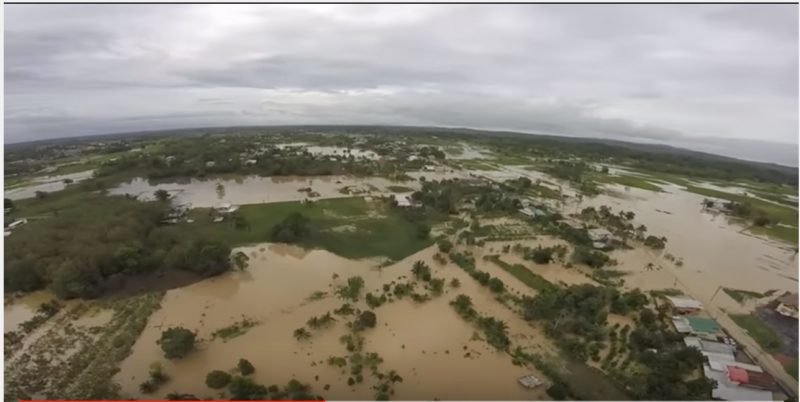 A screenshot from a YouTube video by Alvin Birbal, showing the flooding in some parts of Trinidad & Tobago after the passage of Tropical Storm Bret on June 19, 2017.

As of 5 a.m. on June 20, 2017, the tropical storm warning that was in effect for Trinidad and Tobago was discontinued — but in the aftermath of Tropical Storm Bret, the humour and lightheartedness of storm night has taken a sobering turn.

A YouTube video uploaded by Alvin Birbal showed the devastating degree of flooding in south Trinidad as a result of the storm:

There were also reports of landslips, fallen trees, and rivers bursting their banks, but thankfully no loss of life, save for one incident in which a man fell and broke his neck running from the heavy rains.

Many netizens shared their photographs and videos via Twitter:

The pomerac tree that fell on Ward 23 of the St Ann's hospital that housed 27 patients. Luckily no one was hurt @tv6tnt @expressupdates pic.twitter.com/e7VxaVuhgO

Photos of the effects of Tropical Storm Bret came in from far and wide:

Some folks simply tried to make the best of a bad situation:

Residents recreate in floodwaters in Pasea, St Augustine. The river is completely backed up and about to burst its banks. @tv6tnt pic.twitter.com/Sxb0H6I0Sw

On Facebook, Taran Rampersad shared photos and stories, and gave updates on several areas across the country, including reports that Mosquito Creek, a major south causeway that hugs the coastline, was flooded, making access from south Trinidad to the central and north of the island quite difficult. In a moment of frustration, he added:

Everyone sees what's wrong with Mosquito Creek – has seen it for generations. But it's South of the Light House, so no one seems to care.

Because most businesses and government services are centralised in Port of Spain, there is a common perception that any place beyond the lighthouse — which is situated on the perimeter of the capital city — is of no import. Nigel Wall, who posted a photo of the flooded Barrackpore area, echoed that concern:

Because the government and Port of Spain is ok, no word from the authorities on what they are doing in the South.

But under all seriousness, yunno if somebody had the presence of mind to put a piece of monitoring equipment in the Caroni and the Creek to tweet when the water level reach a particular height that might not be the worst public service in the world. #JustSaying

Rains all night and still falling, electricity gone since 9pm and roads blocked in several places (flooding and slush by quarry, land slides by Christophene king, large tree falls before Asa Wright and perhaps more). Ministry of Works already starting from quarry with back hoes to clear the roads. Phones still in operation (thanks to TSTT's new cell site generator) but cell phones will be losing charge soon with no way to recharge until roads are cleared and T&TEC can reach inside. No personal injuries or property damage that I know of after making several calls to residents.

The “Christophene king” she refers to is a farmer who grows the vegetable in an ecologically unsustainable way, causing great danger to the already precarious road that borders his area. Asa Wright is a nature centre that has taken great care to preserve the rain forest of Trinidad's northern range. TSTT is the state telecommunications provider, and T&TEC is the Trinidad and Tobago Electricity Commission.

Meanwhile, Facebook user Rhoda Bharath shared a report on areas that were affected by the storm, and the Facebook page The Daily Corbeau posted a photo album of some of the damage caused.

The storm also affected the water supply in some areas:

As is often the case with these types of occurrences, politicians attempted to use the storm as a platform for one-upmanship, which some hashtagged a #NaturalPoliticalDisaster. The Rundown, a popular television show on CNC3, posted a photo of some of the opposition-affiliated lawyers involved in the current judicial controversy in Trinidad and Tobago, along with the following caption:

Rumour has it that the [opposition party] UNC plans to file an injunction in the High court to stop tropical storm Bret from passing over this country. #rumours

Naturally, Wired868's Mr. Live Wire chose to look at the more amusing side of the situation, calling Tropical Storm Bret “the biggest case of overselling the damn thing since President Carmona claimed to be a superhero whose powers were pre-action protocol letters, distraction and donkey logic”, but Twitter user Judy Raymond summed it up well:

Some people suffered major losses in a minor storm. The season has only just begun–and we don't usually get hit at all. Fingers crossed…