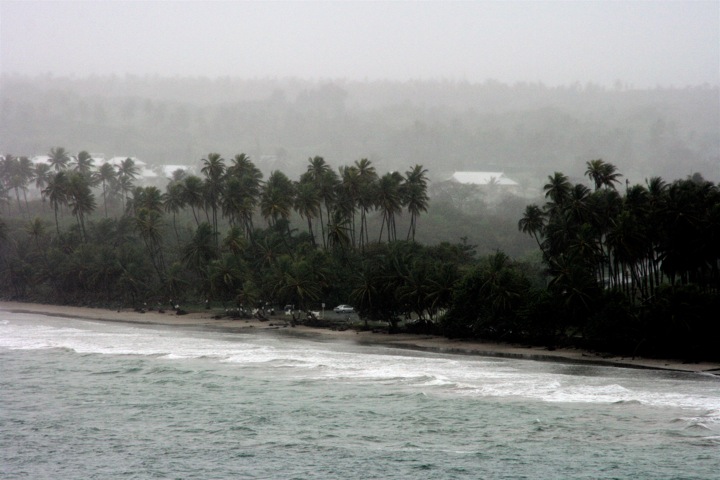 Bad weather in Trinidad and Tobago in 2007. Photo by Georgia Popplewell, CC BY-NC-ND 2.0.

Tropical Storm Bret has its sights set on Trinidad and Tobago — a rare occurrence, considering that the twin island republic lies just below the hurricane belt and is usually spared the wrath of foul weather come the annual Atlantic hurricane season.

Quite apart from Isidore in 2002, which didn't have much of an effect on the two islands, the last time a tropical storm came close to this neck of the woods was 1993. It was also named Bret, but passed stealthily between Trinidad and Tobago causing slight flooding and power outages; Venezuela, however, suffered great damage and loss of life.

Given the sense of deja vu, you'd think Trinbagonians would be keen to take the storm seriously — the meteorological service and Office of Disaster Preparedness and Management have issued several advisories to this effect — and perhaps most people are. But they wouldn't be “Trinis” if they didn't put their brand of humour on the whole experience, which is where Twitter comes in.

On the eve of the storm, three hilarious new Twitter accounts appeared: @StormBret, @GalvanizeRoof and @God868 — the last of which, using the islands’ area code, is a tongue-in-cheek reference to the nationwide notion that “God is a Trini”, ergo no harm can befall the country.

@StormBret took issue with this cavalier attitude early on, tweeting:

Everything is a joke for you all, I'm no comedian you know

Full of pluck and bravado, @StormBret promised to hit Trinidad and Tobago hard:

This, some netizens felt, would be a necessary wake-up call:

Ago hear bout u ? https://t.co/TkVcXjmPf1

I will hear about you

Others decided it was best to sweet talk the storm into sparing things that were important to them:

Yo @StormBret, can you leave some zabocca on my tree please?

To which he replied:

You know it serious when @StormBret close KFC early

While some were thanking the storm for an additional day off work after a long weekend, others were suggesting that “If anybody gives birth to a son 9 months from now then by rights u have to name him Bret!!”. @StormBret replied:

It go be ah honour https://t.co/tBvMGGbNRw

Naturally, politics had to come into play. When one Twitter user quoted the prime minister:

He of all people shouldn't be talkin. https://t.co/I0LQ8TjCDX

Meanwhile, @StormBret and @GalvanizeRoof got into a bit of an altercation, as storms and roofs are wont to do:

Who they praying to now? Ik god ain no trini https://t.co/tBakFOuQKA

Trini or not, @God868 was not impressed. Referring to a recent incident that caused widespread outrage, in which Roman Catholic priest Fr. Clyde Harvey was tied up and robbed at gunpoint in a church, the almighty tweeted:

Or, put another way:

Finally, @StormBret answered the question that was on every Trinbagonian's mind:

Why Trinidad tho and why you taking so long man ? @StormBret