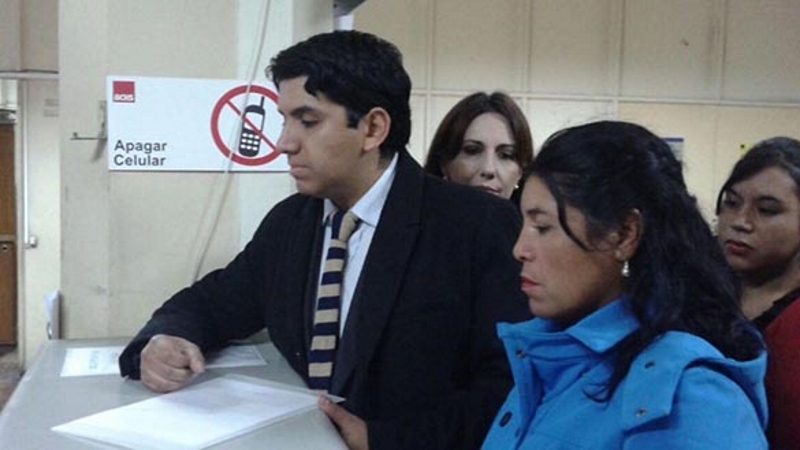 Lissette's mother who, together with her attorney, sued the State of Chile. Photo by Univisión/ Sebastián Lafaurie, used with permission.

This report written by Daniela Mohor for Univisión was published by CONNECTAS. The following version has been published in Global Voices thanks to a content-sharing agreement.

The death of Lissette Villa, an 11-year-old girl in a children's home run by the Chilean state, uncovered a crisis in children's centers throughout country. According to official data, between 2005 and 2016 an estimated 865 children died while in the care of state-run children's service centers.

She only had two weeks left before she turned 12. But for Lissette, her upcoming birthday was only a source of distress. She knew at this age she would have to leave the home for minors where she had lived since 2014 and transfer to another home in the commune of Pudahuel in Santiago. The place was well known by children like her — victims of abuse and mistreatment, abandoned by family, or juvenile delinquents — as one of worst in the network of protection centers of the Chilean National Children's Service (SENAME).

Lissette never made it to the center in Pudahuel. On April 11, 2016, she died of cardiac arrest. The circumstances of her death are still under investigation. Although a report by the Investigative Police lists “suffocation due to imprudent and careless actions of her caregivers” the autopsy indicates that at the time of death she had “facial injuries.”

More than a year has passed since, but Lissette Villa's death is still in the news in Chile. Once it became public, her story of poverty, insecurity and violence forced Chileans to pay attention to what happens to almost 100,000 of the most vulnerable children who seek protection and psychiatric help from SENAME each year.

The information that has come to light since then is devastating: in October 2016, Solange Huerta, who assumed leadership of SENAME in the middle of the crisis, revealed that between 2005 and 2016, an estimated 865 children and adolescents died while in the care of children's services. Of that number, 249 were adolescents over the age of 14 with a criminal background; 406 were children in the custody of their parents or relatives in outpatient protection programs. But the group that has caused the most impact is the 210 children who, like Lissette, lived in protective housing because their parents and close relatives were unable to care for them. Of these children, more than half were disabled and about one-third were under 6 years old. For 47 of them, according to the SENAME report, the cause of death is inconclusive.

“Lissette's case opened pandora's box,” said Sebastián Lafaurie, Lissette's mother's attorney, who has filed a complaint against SENAME. “After her death, the Public Ministry conducted an investigation into all of the centers across the country (around 260) which exposed negligence and failures in the system”:

Now we know that hundreds of children died, but no one reported their deaths. They remained there forgotten, because they are children that no one cares about.

A number of important measures have been put in place for children, but despite all that the state, independent of the current government, has forgotten the most disadvantaged children in Chile: those who are victims, who have had their rights violated and are in the care of the state. It seems that this is the great forgotten branch of childhood in Chile.

The consequences are very real. In the last several months since the revelation of SENAME's institutional crisis, the media has published shocking stories: Jean Alejandro, for example, who was taken away from his mother 39 days after he was born and died at 1 year of age from acute pneumonia, a result of the neglect of his caregivers. Another story was published about a group of adolescents who fled from children's homes and preferred to live in an unsanitary wasteland in the middle of Santiago rather than return to SENAME's centers. There are allegations of beatings, sexual abuse, rape and prostitution within the centers. Among the deaths, several children took their own lives.

María José Ortúzar, psychologist and family mediator who has a degree in domestic violence, child abuse and sexual abuse, said:

It's horrible. There is a real death here, the death of hundreds of children, but there is also a symbolic death in their invisibility. There's no room for them. The world continues turning while they in SENAME are dealing with complex situations, that many times drive them to escape without having anywhere to go.

María José Ortúzar has not lost hope that changes are beginning to happen. “There has always been a problem with children in Chile. It's something that's been underground for many years,” she said. “Now for the first time the issue has come to light and has been discussed in the public square for months. The subject has been opened.”