Protests Break Out Across Idlib Against Syria's Al Qaeda Branch 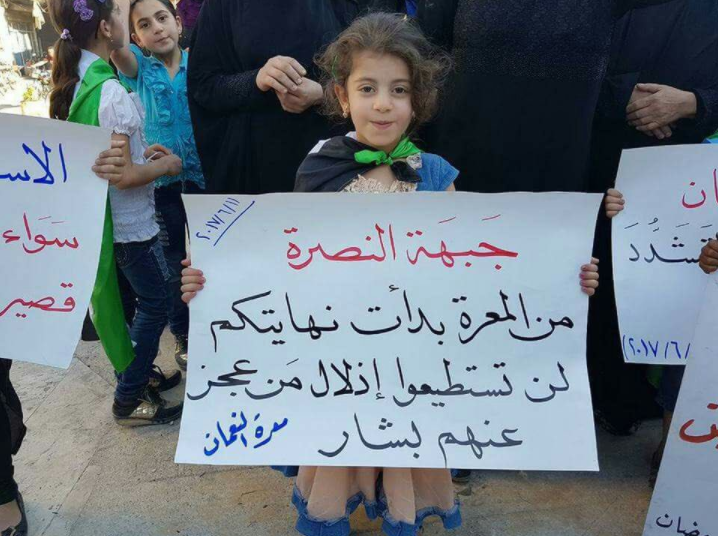 Girl holding a sign during one of the protests. It reads: “O Jabhat Al-Nusra. From Maarat Al-Nooman your end has come. You cannot humiliate what Bashar Al-Assad couldn't.” Source: Twitter.

Under the slogan “The People Are Stronger Than You”, thousands took to the streets in Ma'arat al-Nu'man, a city in the northwestern Syrian governorate of Idlib, on June 11, 2017, waving Free Syrian flags to protest Hayat Tahrir a-Sham (HTS, formerly al-Nusra, Al-Qaeda's Syrian branch) and its latest crackdown.

Ma'arat al-Nu'man, 30km south of Idlib city, has been under rebel control for years now, with clashes between moderate forces and Jihadists breaking out periodically.

These latest protests came as heavy clashes erupted when HTS raided the base of FSA Division 13, a Free Syrian Army (FSA) group, killing and detaining several members on June 8.

From June 6-8, clashes erupted between HTS and Sham Legion in Ma'arat al-Nu'man, Divison 13 and the Free Police joined the fighting on June 8. By the evening of June 8, HTS captured both the Division 13 and Sham Legion's headquarters in Ma'arat al-Nu'man. They killed Colonel Tayser al-Samahi, brother of FSA Colonel Ali al-Samahi, and the head of the Free Police in the town.

The next day, HTS announced the end of their operations against FSA's Division 13 and took full control of the town.

Later on, a ceasefire deal was agreed upon and signed between the Free Idlib Army (FSA's Idlib branch) and HTS in the town and the latter ordered the 13th Division to be disbanded.

During the clashes, several civilians were also killed and injured.

The next day, hundreds of protesters took to the streets to protest HTS’ latest offensive against the FSA, and demanded the Jihadi group leave the city.

According to the Syrian Observatory for Human Rights, demonstrations kicked off in the village of Marshourin in Idlib's countryside following the raiding of FSA Division 13's headquarters, and then proceeded down to Ma'arat al-Nu'man. Shots were fired by HTS forces into the air in attempt to break up the demonstrations.

Activists said some people were surrounded in the Srouji Mosque after prayer time by HTS forces.

Protests in Ma'arat al-Nu'man kept on going throughout the weekend against HTS and its actions, and in support of the Free Syrian Army, with the protests on Sunday June 11 being the largest.

Thousands protested in the streets, demanding that the persecutors be punished, and for HTS forces to leave the city.

The great power r the ppl.Will not accept any injustice whatsoever
The Syrian revolution ongoing to topple every tyrant✌?Maarat Nomaan today pic.twitter.com/1f24Q1W4z7

Reports from activists stated that a meeting was held on Sunday between HTS, local council members, and dignitaries, and a statement was issued regarding the incidents.

Following the clashes it was reported that FSA Division 13 would be dissolved. The Free Idlib Army, of which FSA Division 13 is a part, agreed to the dissolution in a joint statement with HTS, as well as the handing over of the division's headquarters.

HTS claimed that the latest offensive was not ‘against the people of Ma'arat Al Nu'man’, but ‘against a few corrupt forces in the city’ and that talks were being held to deescalate the situation.

FSA Division 13 is a moderate rebel group, supported by the Syrian National Council and funded by Qatar and Saudi Arabia.

The Free Syrian Army is a faction in the ongoing Syrian civil war founded on July 29, 2011 by officers who defected from the Syrian Armed Forces with the goal of bringing down Bashar al-Assad's regime.

With the start of the Syrian conflict, FSA was considered the main Syrian military defectors group, and Assad's main rival. But from 2012 and onward, FSA was very weakened for various reasons, making way for the formation of emergent Jihadi groups like the HTS.

These latest clashes were not the first of their kind, nor were the outrage and demonstrations unprecedented.

Over the past year, fighting in Idlib, which is the only province completely controlled by rebel forces, has sparked many protests by residents calling for different rebel groups to put forth a united front against Assad's forces.

The people of Ma'arat al-Nu'man, an FSA stronghold, are not only demonstrating against rebel infighting, but also completely rejecting HTS’ rule in their city.

On March 13, 2016, forces from al-Nusra Front and Jund al-Aqsa, another jihadist group that later pledged allegiance to ISIS, launched an overnight attack against the FSA Division 13's base in Ma'arat al-Nu'man, in what would later be known as the Second Battle of Ma'arat al-Nu'man.

The latest tensions between the moderate rebels and Jihadists started on March 11 as jihadi militants tried to break up an anti-Assad rally supported by moderate rebels. At least 11 militants from both sides were killed in the clashes, according to the Syrian Observatory for Human Rights.

HTS has been struggling for months to rebrand itself and get rid of its extremist image.

Al-Jolani appeared on camera for the first time to announce that the group's name has also changed to Jabhat Fath al-Sham.

“We declare the complete cancellation of all operations under the name of Jabhat al-Nusra, and the formation of a new group operating under the name ‘Jabhat Fath al-Sham’, noting that this new organisation has no affiliation to any external entity,” Joulani said.

But Joulani's announcement didn't actually meet his group's expectations. Many analysts and activists quickly denounced the announcement as nothing more than a theatrical ploy. For example, graffiti of HTS members reading ‘Soldiers of Jabhat Nusra passed here’ was seen as having just appeared on walls across Ma'arat al-Nu'man at around the same time the announcement was made.

A statement was issued by the group on January 28 announcing it had merged with four other smaller Jihadist groups to form a new alliance, Hayat Tahrir al-Sham, or HTS.

Activists have long argued that these attempts are nothing more than cosmetic changes, and that HTS’ goals remain identical to that of Nusra.