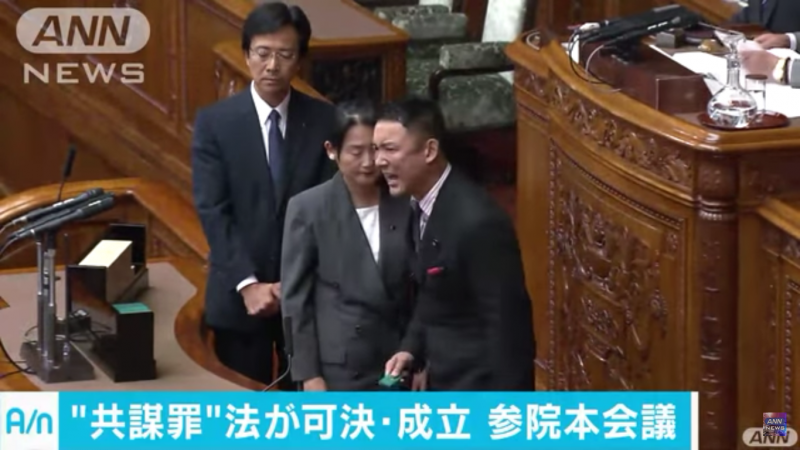 On June 15, Japan's parliament ratified a controversial “anti-conspiracy” bill into law. Despite concerns by opposition politicians, ordinary people and even United Nations commentators about how the vague nature of bill will affect ordinary Japanese citizens with no connections to organized crime, Prime Minister Abe Shinzo's ruling coalition used every parliamentary trick in the book to cut off debate and ram the bill through Japan's bicameral Diet before a parliamentary recess starting on June 18.

There are fears the vague nature of the new law, which covers nearly 300 crimes, will erode personal liberties in Japan by providing authorities with broad surveillance powers, leaving the question of who can be monitored open to interpretation.

Japan's ruling coalition, headed by Prime Minister Abe Shinzo has argued the new law is needed in time for the Tokyo Olympics in 2020, at a time when threats to national security are perceived to be increasing.

However this argument belies the fact that his Liberal Democratic Party has tried for years to revise Japan's existing Act on Punishment of Organized Crimes and Control of Crime Proceeds. The goal, according to the Japanese government, is to join the United Nations Convention Against Transnational Organized Crime.

The Japanese government has also suggested conforming with UN conventions is the main motivation for creating the new law. But Colin Jones, a law professor who teaches at the University of Kyoto, noted in an article for the Japan Times that two UN representatives have explicitly criticized the new law:

Ever since the Meiji Period (1868-1912), treaties and other countries have been used to justify laws the Japanese people neither want nor need, so there’s nothing new here. However, in this case there hasn’t been any serious effort to articulate concrete deficiencies in existing laws — such as bad guys who got away because of them — that will be remedied by the new ones. In fact, I read the convention in vain for mention of a requirement to criminalize conspiracy, other than in connection with money laundering.

The fact that a U.N. treaty is central to the justification for the new law might explain why the government seems particularly annoyed at concerns expressed by not one but two U.N. experts regarding the law’s potential for arbitrary use and infringement of civil liberties.

The two UN experts are Joseph Cannataci, UN Special Rapporteur on the right to privacy, and David Kaye, UN Special Rapporteur on the promotion and protection of the right to freedom of opinion and expression. In a report released in May 2017, Kaye criticized Japan's State Secrecy Act, implemented in late 2014 as having a chilling effect on journalism and free expression.

In a separate letter sent to the Japanese government (which can be read in its entirety here), also sent in May, Cannataci  criticized the new anti-conspiracy bill, which was at the time being debated in committee before being passed into law. In his letter, Cannataci worries that the broad scope of the law may “lead to undue restrictions to the rights to privacy and freedom of expression” in Japan.

Specifically, Cannataci says in his letter, the law, which is ostensibly aimed at organized crime in Japan, does not precisely define what an “organized criminal group” might be, while including 277 types of crimes that might be covered under the law. One example of a possible implementation of the law, Cannataci says in his letter, is that it may legitimize and facilitate government surveillance of NGOs perceived to be acting against the government interest.

Cannataci also noted the anti-conspiracy law covers crimes “which appear to be totally unrelated with the scope of organized crime and terrorism” such as the theft of forestry products and the destruction of cultural properties.

The Japanese government responded to Cannataci's letter by saying his characterization of the anti-conspiracy legislation was “extremely unbalanced” and adding that his behavior was “hardly that of an objective expert.”

However, there were Japanese voices who also made the same points as Cannataci. Following the passage of the bill into law Thursday, Osaka Seiji, an opposition politician who sits on the parliamentary judicial affairs committee that reviewed initial drafts of the bill, said:

I have been completely opposed to the government's rationale for the anti-conspiracy law ever since the legislation was proposed in the Diet. It's possible that the law, which is intended to deal with organized crime groups, will expand to affect ordinary citizens. The law does not concretely define what, when and where it means to “plan” a crime. The rationale for the law is the polar opposite (of who the law will affect). Why did we even bother debating the bill in the Diet? This law should never have been passed.

Yamamoto Taro: “Does the new law treat everyone who lives in this country as potential criminals?” #conspiracy bill #yamamoto taro

Ordinary citizens themselves turned out to protest against the new law.

I have uploaded a photo of protesters demonstrating in front of the National Diet as the anti-conspiracy law was ratified in the evening of June 15th. […]