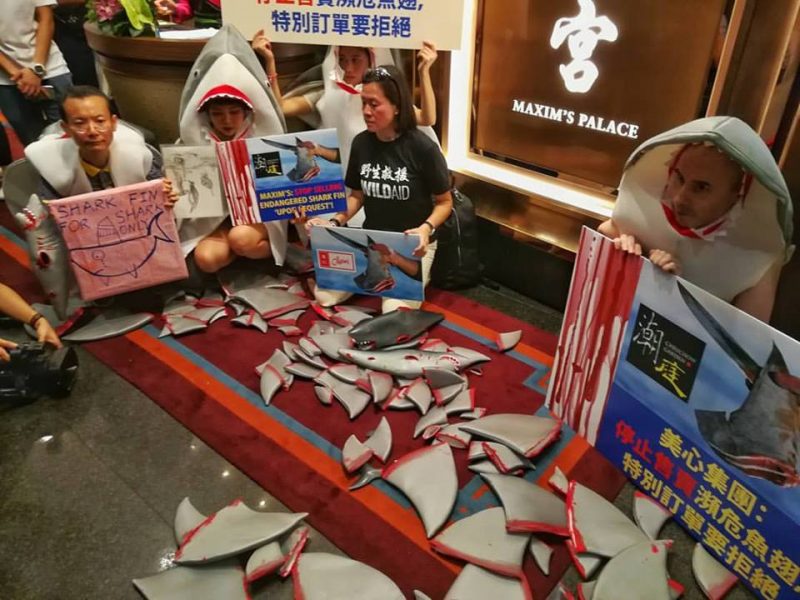 Shark Fin Protest outside one of Maxim's restaurant. Photo taken by PH Yang. Non-commercial use with permission.

Dozens of activists protested on 10 June outside the flagship restaurant of Maxim's Group in Hong Kong against the selling of shark fin soap in its restaurants’ menus.

The protesters, a number of whom were children, wore finless shark costumes splattered with red paint and chanted, “When the buying stops, the killing can too”. Photos of their demonstration were shared on Twitter.

Hong Kong is the world’s center in shark fin trade, accounting for about half of the global shark fin trade every year. The demand for shark fin soup at Chinese banquets is behind the finning of 73 million of sharks every year. Currently around a quarter of the world's shark and ray species are threatened with extinction.

While a survey in 2015 indicated that 94 percent of the respondents did not want to consume the threatened species, local restaurants have refused to take the luxurious dish off their menus. In most cases, consumers are compelled to choose the restaurants’ set menus for their wedding or festival banquets, which usually include shark fin soup. As indicated in the Hong Kong Shark Foundation’s survey, which covered 375 Chinese restaurants in the city, 98 percent had shark fin soup on their 2016 Lunar New Year menus.

A petition demanding the restaurant group to stop selling shark fin soup explained the rationale behind the protest:

The company has been resisting calls to drop shark fin soup from their set menus, ignoring the will of many good Hong Kong people who are against this cruel and unsustainable tradition.
Maxim's claim they only serve shark fin soup made from blue sharks, but according to recent scientific evidence, blue shark populations around the world are being wiped out by greedy overfishing.
Is Maxim's going to wait until blue sharks go extinct before it admits that there is a problem?
Maxim's has a firm responsibility to end this practice to save sharks and the marine environment by immediately removing shark fin from all its menus, especially its set menus. Just as Hong Kong consumers have a responsibility to stop eating shark fin, restaurant groups like Maxim's also have an equal responsibility to stop selling it.

WildAid Hong Kong, the animal right organization behind the anti-shark fin protests, also alleged that it is easy to order endangered shark species, like whale shark, basking shark and silky shark — which are listed on Appendix II of the international Convention on International Trade in Endangered Species (CITES) — in Hong Kong restaurants “upon request”.

Hong Kong is a signatory to the CITES and according to the treaty, endangered species listed on Appendix II “must be controlled in order to avoid utilization incompatible with their survival”.

Despite claims by Maxim's management that it serves only blue sharks in its restaurants, the undercover footage demonstrates that the chain privately offers other more ‘exotic’ species. These are usually made available by restaurant staff acting autonomously of management to please their more demanding clientèle. Laxity and poor transparency is endemic across Hong Kong's Chinese restaurant industry, and supply chain secrecy is a problem in Hong Kong's notoriously crime-riddled shark fin trade.