A Cuban Writes to Donald Trump 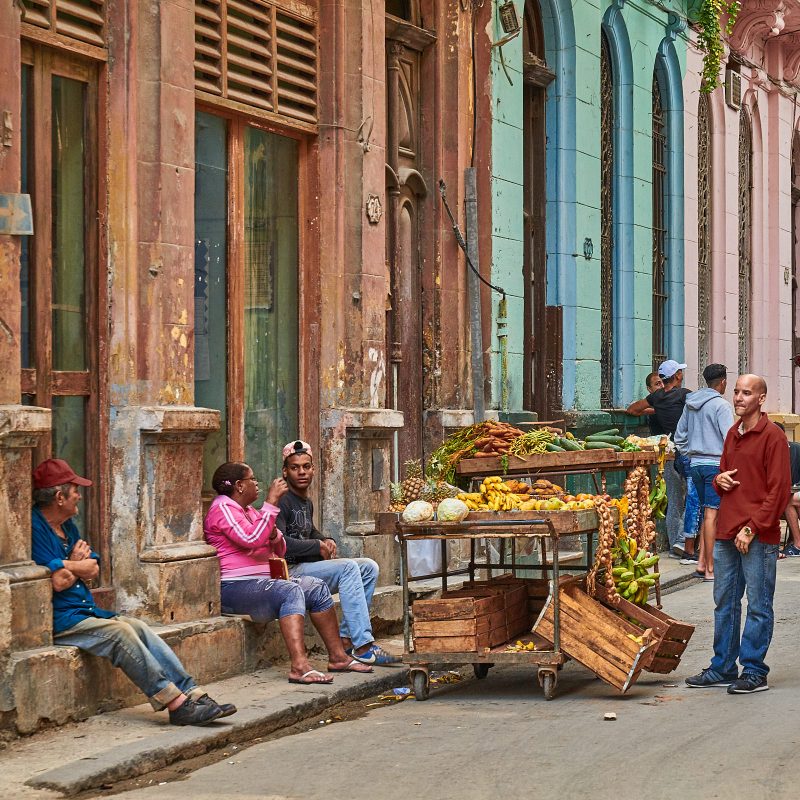 Do you happen to know the meaning of dignity?

The measures that you announced today, President Trump, are pathetic. As pathetic as that group of people who call themselves Cubans, and who gathered around the leader of another country to beg him to economically strangle their own. Those who yell “Long Live Free Cuba” from the other side of the Straits of Florida, or the congressman who can barely pronounce the word “freedom” with the beauty and looseness of the Spanish language. The measures you announced today are disrespectful of the Cuban government and disrespectful of the Cuban people. They are disrespectful of me.

An absolute arrogance—a word that not by chance rhymes with “ignorance”—has characterized all your presidency, and reached a turning point today, June 16, 2017. It is not possible to ask to a president who is incapable of understanding the fundamentals of climate change—which is especially noticeable in the state where his most cherished property is located—to understand the complexities of a country like Cuba. A president who has been unable to commit to the future of humanity, who is incapable of committing to the future of a small Caribbean island and its citizens. And it would have been extremely simple. All the Cuban citizens have asked of the United States since forever is respect. And the only thing we didn't get this June 16 was precisely that—respect.

At the beginning of my letter, Mr. President, I asked if you knew the meaning of the word dignity. It is easy for a ruler to have dignity. He or she doesn't have to choose what to eat, where to sleep, what his or her kids wear. It is people, not governments, who can fancy themselves dignified, because they are the ones who face tough decisions. I come from a poor, dignified family. People who were born poor and dignified, and who have remained poor and dignified for almost three generations. Primary school teachers, librarians, school aides, technicians, cowboys, farmers. When my mother asked what I wanted to study if I managed to go to university, I, a 9-year old girl, answered “Anything but a teacher because I don't want us to be so poor”.

The windows of my mother's bedroom were paid for with the profits from selling two orphaned sheep we had fed with baby bottles. I have had the same bed for 25 years. I remember each pair of my shoes since sixth grade, because I have only had three. I could tell you about the first time I saw a foreigner throwing candies out of his rental car on Guanabo Beach, because never before had I seen candies of such colors. I remember every book I read from seventh to ninth grade because they saved me from the so-called Special Period.

Even with all these economic hardships, somehow I managed to be happy. Mangoes, tomato season, and the mountains that surrounded my house made me happy. I invented a thousand stories to make some sense of our economic poverty and turn it to spiritual richness. One day, I told my friends from school that if you follow the track across the mountain behind my house, you could arrive at Guantanamo Bay. There were so many repeated stories and mysteries around that place that wasn't yet a torture camp, but a space for Cuban fishermen, that brought it close to me. I told them about the minefields, the sea, the Cuban soldiers’ faces, the American faces, the camping tents. Poverty taught me to imagine. I don't think all kids should have to be poor in order to develop their imaginations. All I am saying is that, somehow, maybe in a manner that's somewhat twisted, we have learned to overcome reality barriers.

You can hear stories like these in any Cuban street. On December 17, 2014, Barack Obama showed that another reality was possible. But to be fair, we have learned to be mistrustful. I am sure the measures announced today took few Cubans by surprise. We have learned to wait and hope for the worse and celebrate the good, when it comes. It almost never comes. Not the wage increases, the Internet access we need, the Constitutional reforms we ask for; not the prosperous economy or the sustainable socialism—nothing. Instead we had immigration reform, the end of the carte blanche, the opening up of the private sector, the ability to buy and sell cars and houses and another bunch of favors euphemistically disguised as “reforms”.  In this back and forth between people and government we have accomplished things, and other things, age-old debts of a country to its people, start to crumble.

Repeat after me, Mr. President: “Access to education should be free and universal”. This is not a Bernie Sanders issue, is an objective that several countries infinitely poorer than yours have managed to achieve. Repeat after me, President: “Access to health care should be free and universal”. Another nice way for not only Cuba, but also Switzerland, Singapore, Ireland, Canada, to ridicule your country. A huge international conspiracy to put the United States in an awkward position.

Individual trips by American citizens are done. Do you know whom this decision harms? Firstly: the people of your country; a country that boasts of its freedom and that allows its government to limit its freedom of movement (enshrined in the Universal Declaration of Human Rights). Secondly: the government of your country. What kind of global power believes that allowing its people to travel to an island with 11 million inhabitants and a president named Castro could enrich only that government? Have you ever seen someone from the Cuban government cleaning Saratoga Hotel rooms, serving in the taverns and restaurants proliferating across Havana, planting the organic food Americans want so badly? Have you seen Raúl Castro selling souvenirs in Cathedral Plaza? Have you seen José Ramón Machado Ventura taking a bus to get to work early? Have you seen Ramiro Valdés’ house listed on Airbnb? Or Miguel Díaz Canel offering round-trip airport taxi service to a Kentucky citizen? Is Lázara Mercedes López Acea cleaning bathrooms in Terminal 3? I'll help you with the answer: No. It is not only the aforementioned persons who benefit from the increase in American tourism to our island. The government takes its cut, obviously—you should know that since you are a now in government—but also the common citizen: the waitress, the farmer, the taxi driver, the cleaning lady….

You didn't even have George W. Bush's courage to halt money transfers, travels and visas. Your measures are barely containment rules to appease Marco Rubio—your presidential campaign adversary who ridiculed you on several occasions, not because he's especially brilliant, but because it's so easy to mock you. Your measures reek of cowardice. They're a smoke screen. A distraction to keep the American people focused on something besides what really matters to the country. Meaning not even the future, but the current state of the country. Your measures, President, are the result of political arrogance and disrespect. Other countries may yield to your country. Cuba has never done so and won't start now. Maybe the deal with Obama is totally fucked. But our dignity remains intact.