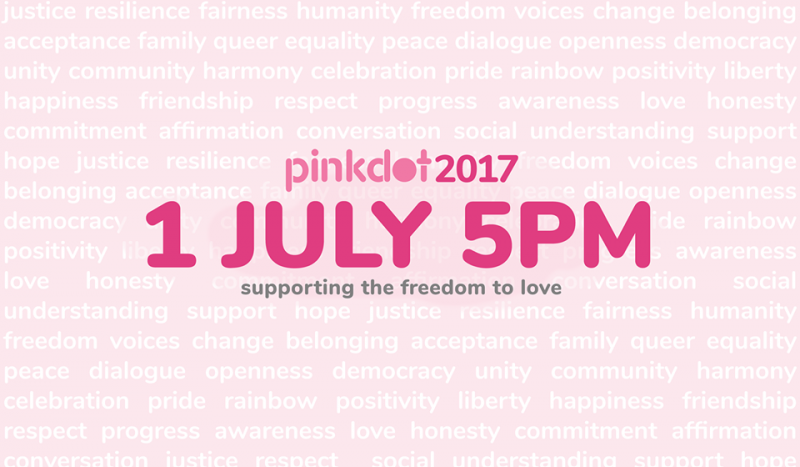 The theme of this year's Pink Dot celebration is “Supporting the freedom to love”. Source: Facebook

Singapore’s annual LGBT event known as the Pink Dot will be held on July 1 with the theme “Supporting the freedom to love”.

More than 100 sponsors have already pledged their support for the event, which is expected to gather thousands of participants in Hong Lim Park, the only place in Singapore where citizens can hold a protest and gather with minimal police supervision.

As expected, various conservative groups have publicly opposed Pink Dot by arguing that it promotes values that are not shared by all in Singapore. Some have complained about the presence of Pink Dot billboards in mall, cinemas, and other places visited by children.

In fact, a formal complaint was probably filed about a Pink Dot billboard placed in a cinema owned by Cathay company, which prompted the Advertising Standards Authority of Singapore (ASAS) to review the ad. Cathay was a previous sponsor of Pink Dot.

ASAS subsequently urged Cathay company to remove Pink Dot’s tagline in one of its cinemas:

The ASAS Council is of the view that advertisements in public spaces should be prepared with a sense of responsibility to public sentiments. As such, advertisers should avoid statements in advertisements that may contribute to heightened public sensitivities. This was the basis on which ASAS asked Cathay and Pink Dot to consider removing the tagline “Supporting the freedom to love”.

Below is a photo of the billboard ad which was featured in a Facebook page opposing Pink Dot. Cathay defended the placing of the ad before ASAS made its recommendation to remove the tagline.

ASAS is an advisory council recognized by the government. It clarified that while the billboard does not breach the country's ad standards on upholding family values, the tagline could inflame “public sensitivities”. The billboard announcing the event can remain but ASAS said Cathay should reconsider the use of the tagline.

Cathay acknowledged the advice of ASAS but reiterated that it cannot simply remove the ad's tagline because it's owned by Pink Dot. A Cathay spokesperson added that Pink Dot’s tagline reflects the mission of the company:

This is and has always been in line with our mission of bringing people together. We hope to inspire people to embrace the values of equality where one can live and love freely.

For their part, Pink Dot organizers are quite confused with the reasoning of ASAS:

We cannot see how a tagline calling for inclusion and love can therefore be seen as undermining the concept of family or disrespecting the individual.

We cannot help but wonder if the Council’s request arose out of complaints by a small group of people against Pink Dot who vociferously support the discrimination of Singapore’s LGBT community. We are confident Singaporeans are able to discern our message of inclusion, diversity and love from one that seeks to divide us because of differences.

Media scholar Cherian George advised ASAS to focus on other pressing issues like the rise of violence in TV programs:

If the Advertising Standards Authority can take up frivolous complaints like this, surely it can vigorously pursue issues of advertising ethics that are far more pressing from the standpoint of consumer rights.

Given what years of research tells us about the impact on the young of irresponsible depictions of violence, do you sincerely believe ASAS has done enough to regulate the way fictional violence is glorified in our public spaces?

The ASAS action is not the only controversy encountered by Pink Dot this year. Last month, the police reminded the organizers about the recent amendment in the law banning the participation of foreigners in political events like the Pink Dot. Furthermore, police insisted that a barricade is needed around the park to ensure the safety of the participants. Pink Dot is also prohibited from getting donors from other countries.

Despite the growing strength of the LGBT community, Singapore continues to criminalize sexual acts between men.

The July 1 event will be the 9th Pink Dot celebration in Singapore. In 2015, the event gathered more than 28,000 participants.