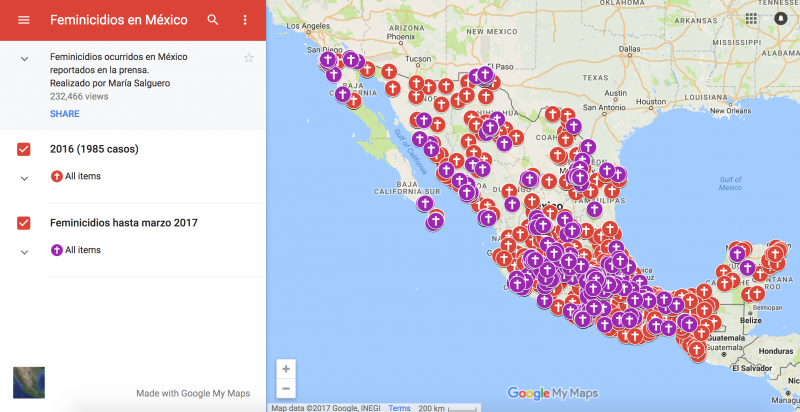 Screenshot of the Femicides in Mexico Map.

The interactive Femicides in Mexico Map, the most comprehensive and up-to-date of its kind in the country, is – according to its fundraising page – a “citizen-led, civic, independent initiative based on open data which, using geographical coordinates, has been mapping cases of femicide since 2016″. So far, it has recorded 2,355 cases.

The map's creator uses the practical definition of the United Nations model protocol for the investigation of gender-related killings of women, which defines “femicide” as:

the murder of women because they are women, whether it is committed within the family, a domestic partnership, or any other interpersonal relationship, or by anyone in the community, or whether it is perpetrated or tolerated by the state or its agents.4

Her sources are newspaper reports and official statements on femicides, and her motivation is simple and clear: to name every single one of the women so that they are not forgotten.

She uses the pseudonym “Princesa” (“Princess”) to conceal her true identity so as to ensure her safety. Princesa says she became aware of community affairs through her mother, now 80 years old. Her mother, originally from the state of Zacatecas but who moved to Mexico City, is a working woman, the granddaughter of revolutionaries, with strong religious beliefs and who fights for the rights of the just and those of workers.

Princesa studied physics at the National Autonomous University of Mexico and developed a passion for seismology and tsunamis. She ended up working commerce, but also became involved with maps when she collaborated with the intersectional peace project Nuestra Aparente Rendición (“Our Apparent Surrender”) and with online grassroots groups that track cases of kidnappings. Her dedication and technical knowledge gradually grew, as well as her ability to deal with big data and to use tools for the systematisation of geographical coordinates.

On the Femicides in Mexico Map's Facebook page, she receives messages from the press, politicians, legislators and ordinary people interested in her documentation project, but for her, the most important messages are those from the family members of the victims. Seeing the names of their daughters and the places in which they lost their lives on the map is a way of recognising that they have a name, a history, and that their lives have value, Princesa says, as she recalls some of those messages.

This map makes it possible to highlight the places where we're being killed, identify patterns, back up arguments concerning the problem, georeference sources of help, encourage prevention and try to prevent femicides.

Princesa's project is undertaken pro bono, so she is in constant need of support. For this reason, she has opened a fundraising page on the Generosity website, where she explains a bit more about her motivation:

[The goal is to] gather essential information so that journalists, researchers, activists, human rights campaigners, those who seek justice and those who take decisions understand the reality of femicide in Mexico. It is a harsh, day-to-day reality which is constantly increasing.

A picture says more than a thousand words and there are still a thousand stories to be told. Support the Femicide Map #MapadeFeminicidios https://t.co/jd4XqyVpcu  #Niunamenos

Princesa says she's happy doing something for people. Her mother and sister think likewise; her father always asks her to be careful, but also to not give up doing it because it is so worthwhile.