How Much Money Did Macedonian Railways Make From the 2015-2016 Refugee Crisis? 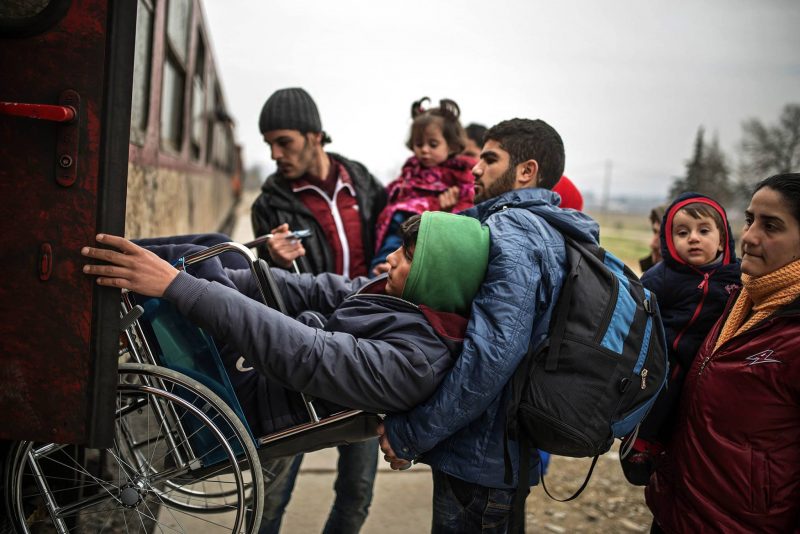 During 2015 and 2016, Macedonia's state-owned railway charged refugees, who had crossed into the country's territory while fleeing war, conflict, persecution, and other injustices, five times the normal price of a ticket. The move was widely criticized for seeming to profit off of a vulnerable population.

Fast forward to June 2017, when Macedonian train engine drivers went on strike demanding their unpaid salaries for April and May. The strike paralyzed domestic transport and ended after one day when the new government agreed to satisfy their demands.

The development has left some Macedonians wondering just how much the railway and other state companies profited from the influx of refugees and migrants and where that money has gone. Journalists seeking accountability, however, have had a hard time finding out the truth, given the Public Revenue Office's refusal to disclose details.

Nearly 900,000 people used the so-called Western Balkan Route to transit from the Middle East and North Africa to Western Europe in 2015 and 2016. From July to September 2015 alone, over 300,000 of them passed through Macedonia on their way from Greece to countries perceived to be more welcoming, like Germany.

After the flow of refugees and other migrants increased in mid-2015, the Macedonian government established special trains. The refugees would cross the Greek border on foot, get processed there, then board the train in Gevgelija and disembark in Tabanovce, near the Serbian border, which they'd cross on foot also. The following Red Cross video presents an overview of the situation at the time.

These trains also had special price, too: public enterprise Macedonian Railways increased the ticket price from the regular five euros to 25 euros for their customers, who had no other choice for legal means of transport. In fact, Macedonian citizens who would help refugees move through the country faced human trafficking charges. This is how one Syrian refugee described the state-sanctioned trip through Macedonia:

We paid 25 euros ($27) each to board an old trash pile they called a train. No words can describe its dirt and terrible smell. Then, when everyone was piled in, it moved as if walking on eggs. That’s what we say in Syria about slow things. But finally I was on the Serbian border.

This has seemingly made for poor working conditions for railway employees, who complain they are underpaid and often forced to wait for months to receive their salaries. The situation culminated in June strike of engine drivers.

Leading Macedonian photojournalist Robert Atanasovski connected the refugee crisis to the seemingly sorry financials of the public railway enterprise on June 5, 2017 when he published a photo on Facebook (presented at the beginning of this story) and wrote:

I grew to abhor the railway employees. I watched them for over a year how they fill the trains with people as if they are cattle, and on top of that they charged people 25 euros for tickets, including the man [in a wheelchair] in the photo. With 25 euros one can buy a cheap airplane ticket from Skopje to Barcelona with WizzAir, let alone a rotten train to Tabanovce. There were days when over 10,000 human beings would cross the border, and everyone (except small children) had to buy the tickets… Now they want to strike because they have no salaries. Where are the money gone, you f*cking thieves?!

The Macedonian ombudsman and human rights organizations have previously demanded an audit of the work and income of the railway companies over alleged violations of the UN Convention and Protocol Relating to the Status of Refugees.

Several days after the strike, the Public Revenue Office refused to disclose the information to journalists who inquired, saying that the profit data about the publicly owned railway firms is classified, with a status of “tax secret.”

During the peak of the crisis, profiteering from the plight of migrants and refugees by private citizens, at least, scandalized the Macedonian public. Before the special train was introduced, some local residents of the towns near the Greek border had charged those passing through exuberant prices for bicycles. Along the way, some people were reselling food and drinks to them at prices several times higher than in the shops, or were asking a very high price of two euros for recharging mobile phones or using a toilet. In the following video, one man who was migrating through the area explains, “These people are very poor, and they want to work. They take some money from the people…”

On the other hand, many other Macedonian citizens invested their own resources into helping the refugees and migrants, eventually forming a nascent humanitarian movement. Global Voices published the testimony of acclaimed volunteer Lenče Zdravkin, while civil society organizations such as Macedonian Helsinki Committee and Legis are publishing regular reports about their work in English.