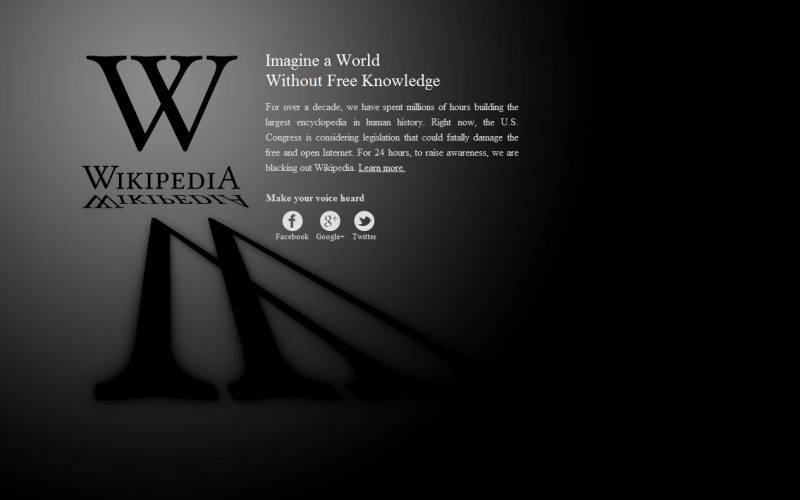 The English-language Wikipedia page on January 18, 2012, illustrating its international blackout in opposition to SOPA and PIPA copyright legislation in the US. Created by Wikipedia (CC BY-SA 3.0)

It has been more than one month since Turkey blocked Wikipedia, the popular crowdsourced encyclopedia. With each day, it is becoming more apparent just how vital a role the platform plays in helping users find and share reliable information online.

Students, reporters and TV series fanatics alike are struggling under the block. While tech-savvy Turkish internet users are accustomed to using circumvention tools to access blocked content — a recent New York Times article reported that Turkey has the third-highest VPN prevalence in the world — many habitual Wikipedia users do not fall into that category.

Although Turkey has blocked articles on Wikipedia since 2008, as noted in a recent report by the Berkman Klein Center for Internet & Society at Harvard University, these blocks are in keeping with regular censorship of the internet since 2007, when the Internet Law (No. 5651) was passed. With the wholesale censorship of Wikipedia, Turkey has become only the second known country in the world, after China, to block Wikipedia.

While the platform remains blocked, multiple “mirror” websites — sites designed to reproduce the content of Wikipedia, which is constantly being updated — have sprung up. One such solution came from IPFS (the Inter-Planetary File System) when the platform put all of Turkish Wikipedia on their decentralized peer-to-peer hosting network, which does not rely on the domain name system, and thus is very difficult to fully censor. The content is thus accessible regardless of the government ban.

Upon hearing the news [of Wikipedia being blocked], we revived an effort to put snapshots of Wikipedia on IPFS, so that people may be able to read it in a decentralized and distributed way. This can help people to at least view all of the Wikipedia content, even if they cannot reach Wikipedia.org itself.

IPFS also emphasized that they did this independently of the Wikimedia Foundation, and that what they've published are screenshots, not live or dynamic versions of the site.

Wikimedia has been involved in other efforts to get round the block, however. Cristian Consonni of Wikimedia Italy has created both tr.vikiansiklopedi.org, a Wikipedia mirror website, and WikiMirror, an open source project that anyone can use to host similar mirror websites if their country ever bans Wikipedia.

Consonni told Global Voices contributor and Asia Community Catalyzer at Mozilla Subhashish Panigrahi about mirroring for Wikipedia on Panigrahi's ‘Open Speaks’ podcast. Below is a short excerpt from their interview:

It's not a complete copy a proxy a mirror. – you access a different URL which is not the usual url and what you see is taken from Wikipedia. Essentially the server redirects your request to the real wikipedia so you can see it even if you are in Turkey where Wikipedia is blocked, because that work is done by a server which is not in Turkey. Mirroring is one of the easiest ways to make Wikipedia content available.