Palestinian Man Documents the Perils of Living Under Occupation on Snapchat 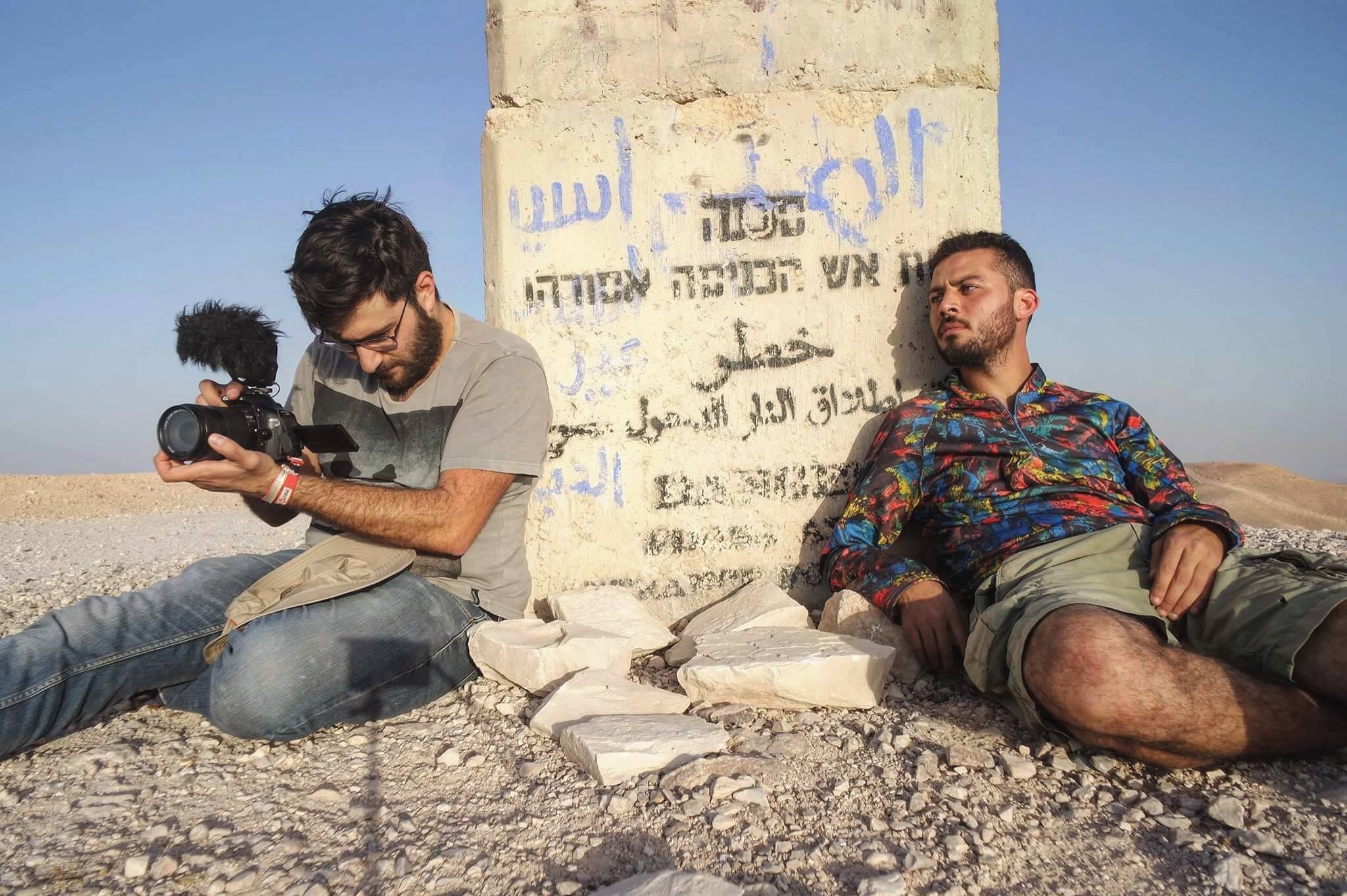 The text reads: ‘Danger – shooting zone, no trespassing.’
Taken in a desert in the West Bank.

As Palestinians marked 50 years since the occupation of the West Bank and the Gaza Strip on June 5, we are reminded of the anguish, misery, and unthinkable injustices they have had to endure for what already seems an eternity.

We are reminded that the adversities faced by Palestinians are not only an active force shaping their daily lives and dictating their every move, but are also by the day inching closer towards being overlooked, and even wholly forgotten, by the outside world. The following article tells the story of a Palestinian man sporting a camera and a traveler's rucksack, who is seeking to create a permanent memory of these adversities.

While most news out of the Occupied Territories conjures a sense of enmity or despair, one Palestinian from the West Bank is trying to change the depiction of the territory, as well as offer people a glimpse into the rich culture, fascinating traditions, and glorious history of the land.

Meet Motasem Ilaiwi, a Palestinian filmmaker in his early twenties from the West Bank city of Nablus.

Viewers of his films still get a sense of the brutal occupation West Bank residents face up front, however. While some of his journeys appear to run fairly smoothly, the young adventurer faces many dangerous hurdles while navigating a system that constantly puts his life at risk.

Ilaiwi has gained a lot of positive attention in the region for his colourful and informative videos, which he shares on Snapchat (username: ps.live) where he tours the many charming cities of the West Bank, providing impromptu history lessons covering the places he passes, and highlighting the strength of the Palestinian people in the face of repression.

Despite the positive nature of the videos, Ilaiwi also stresses the severity of the maltreatment, vehement discrimination, and brutal methods espoused by the Israeli Defence Forces (IDF) against residents of the West Bank.

The key theme of his expeditions is enforced segregation. In the video below, Motasem was stopped by Israeli police for walking on a road that, unbeknownst to him, was for Israeli citizens only.

Throughout his journeys, Ilaiwi travels in the shadows of the IDF which has killed so many of his fellow Palestinians.

Israel has long been known to exercise oppressive control over the West Bank, and has implemented discriminatory policies against Palestinian citizens, via military checkpoints, separate roads for Palestinian and Israeli citizens, and restricted access to key resources.

While critics of Israel believe that this system bears striking resemblance to that of apartheid South Africa, Michael Oren, former Israeli ambassador to the United States, claims that “the vast majority of settlers and Palestinians choose to live apart because of cultural and historical differences, not segregation…The separate roads were created in response to terrorist attacks — not to segregate Palestinians but to save Jewish lives.” 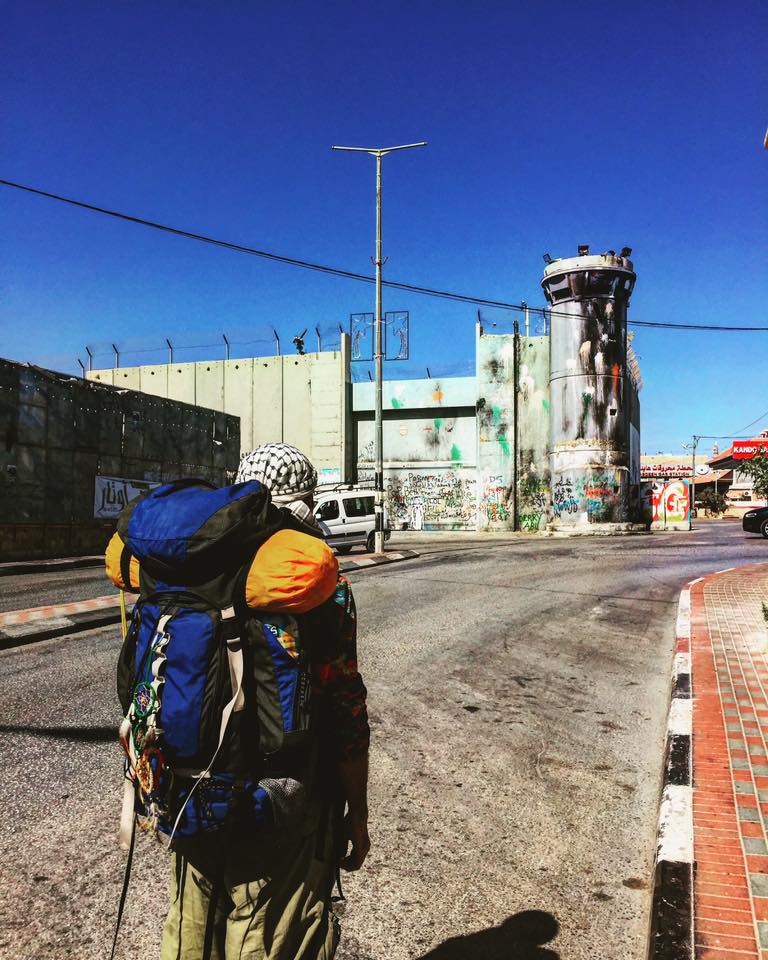 In April 2016, a 24-year-old Palestinian mother and her 16-year-old brother were shot dead for walking on the road for vehicles, instead of the one for pedestrians. Maram Saleh Abu Ismael was on her way to Jerusalem, as she had just obtained a permit to enter the city.

It is alleged that IDF soldiers shouted at the pair in Hebrew, supposedly instructing them to evacuate the road, but as Maram did not speak the language, she froze in fear. The soldiers responded by firing at her and her brother Ibrahim Taha, after he rushed to her aid.

The occupying forces maintained that Maram, who bled to death, was wearing an explosive vest, but it was later revealed that she was pregnant. 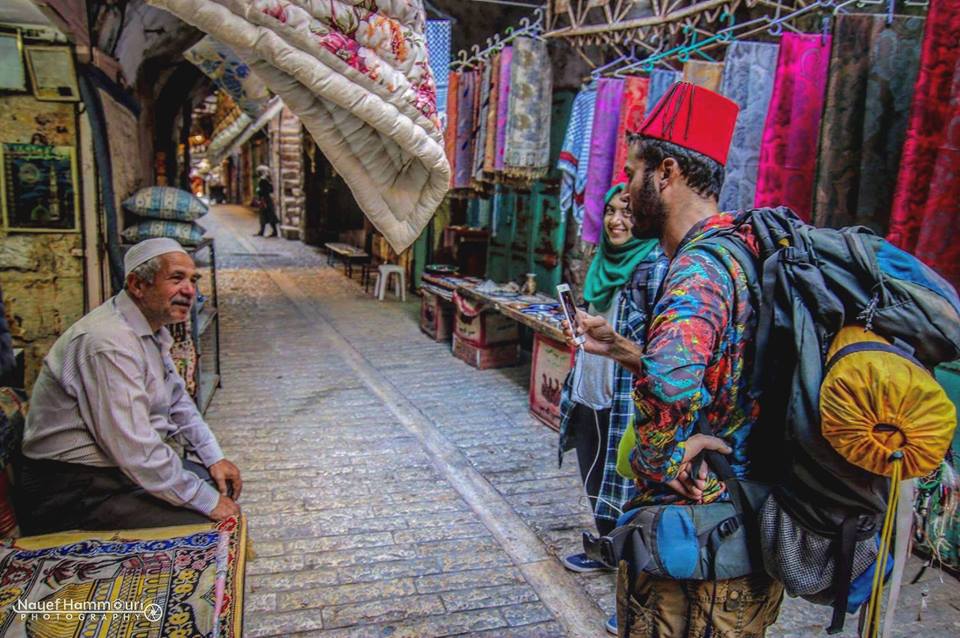 When Global Voices asked Motasem about the dangers he specifically encounters and what he does to keep safe, he responded that “provoking” Israeli soldiers into firing at him was one of his main fears.

Asked about the most perilous city he has visited, he was quick to reply: Hebron.

This, he explained, was mainly due to heightened military presence and overall hostility of the Israeli settlers in the city. The settlements in Hebron are inescapable, he added, and it is extremely difficult to find a path that will not lead to an encounter with the IDF.

On one of his visits to this city south of Jerusalem, he found the Cave of the Patriarchs, or the Ibrahimi Mosque, closed by Israeli forces due to the celebration of a Jewish holiday taking place in the vicinity of the mosque. Israelis had their music blasting, children laughing, and people dancing, while Palestinians watched on from their rooftops. Ilaiwi climbed onto one of the rooftops to film the scene via Snapchat.

The video presents a saddening juxtaposition, but barely skims the surface of injustices in the region. The family that welcomed Ilaiwi into their home for the purpose of filming told him they had received a letter from the IDF earlier that day, notifying them that they would also be needing to squat on their rooftop — as part of their surveillance operations.

Hebron has witnessed a myriad of settler attacks on Palestinians, that range from throwing garbage and rocks to car ramming.

The Israeli army regularly dismisses these cases as accidents, even when witnesses testify that the ramming seemed deliberate. This past April, Middle East Monitor (MEMO) reported at least three incidents of settlers in Hebron involved in a hit and run, with some of the victims being children. These incidents appear to reinforce the assertion of many critics that Israel is benefiting from ‘a culture of impunity’.

In August of 2016, Israel sparked outrage and much debate as it announced its intention to expand the Jewish settlements in Hebron, home to around 30,000 Palestinians and 1,000 Israelis.

A life under siege

Ilaiwi chooses to take mountain routes instead of main roads and sometimes adopts the demeanour and fashion sensibilities of a Western tourist. He alternates between wearing caps, summer flap hats, and even bucket hats, along with a large camping backpack. In close proximity to Israeli forces he speaks English, as he claims they can be easily fooled, since many of them do not speak the language.

According to a report by Defence for Children International, a total of 264 Palestinian children have been shot dead by Israeli forces at random between 2000-2017, a number that does not include the fatalities from air or ground attacks.

Amnesty International’s 2016/2017 report on Israel and the Occupied Territories confirmed that Israeli forces (security guards, police, & soldiers) killed at least 98 Palestinians unlawfully in the West Bank, eight in Gaza, and three in Israel. Most of these victims, including children, posed no immediate threat whatsoever.

I swear to God I have absolutely no problem with the Jewish people, but rather with mentalities that view the world strictly in terms of weapons, war, theft, and destruction. In all honestly, I pity them more than I despise them [Israeli forces]. I think to myself, how truly sad it is to grow up in a community that encourages violence and spews hatred. I am grateful to be on the side of the victim in this context, as I would hate to have grown up among the mentality that justifies and is responsible for the killing of children and destruction of homes with impunity.