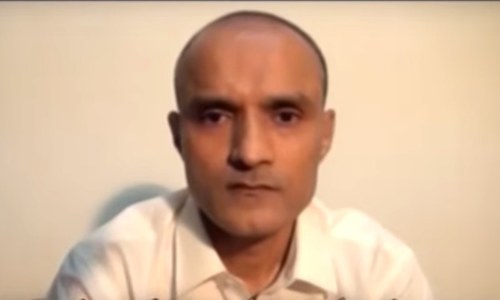 Kulbhushan Jadhav in a screenshot from confessional video.

From media wars to the International Court of Justice, the recent India-Pakistan conflict has prompted a new low in a relationship with a troubled history. And now, the life of a man accused of being a spy hangs in the balance.

Kulbhushan Jadhav is an ex-Indian Navy officer who retired a decade ago after 14 years of service and established a small business in Chabahar in Iran. In March 2016, he was reportedly arrested by the Pakistani military while in the southwest Pakistani province of Balochistan while allegedly trying to cross into Pakistan from Iran.

He was then convicted of spying and espionage and sentenced to death by a Field General Court Martial (FGCM) in Pakistan in April 2017. The Indian government has denied that Jadhav had any involvement with them since his retirement and asked for consular access to him repeatedly, which Pakistan denied 13 times.

Indian authorities took the case to the top United Nations court, the International Court of Justice (ICJ). The ICJ is the principal judicial organ of the UN which deals with international legal disputes submitted to it by states. However, the ICJ has no means to enforce its rulings, and they have occasionally been ignored in the past.

Representing the Indian government, lawyer Harish Salve argued at a hearing that Pakistan had prevented Indian authorities from meeting with Jadhav. Pakistan countered that Jadhav was an agent of the Research and Analysis Wing, India's foreign primary intelligence agency, and India could not explain why he was carrying a fake passport.

Pakistan has reportedly accepted the ICJ's decision and said it doesn't impact Jadhav's case as his execution is subject to appeal.

Jadhav's case touches on many sensitive issues, beginning with the complex relationship between India and Pakistan.

Numerous conflicts over the decades since the post-colonial partition of India in 1947 have kept tension high between the countries. Many times the media from both countries have been embroiled in accusations of spying, whether with spy pigeons or spy drones. Given this history, reporting on Jadhav by various publications has turned into a slugfest of allegations and counter allegations.

It's against this historical backdrop that many Pakistanis have protested the ICJ's stay of execution on social media, calling for Jadhav's death.

ICJ doesn't have jurisdiction in Pak & we have enough proofs against Kulbhushan Jadhav must be hanged #KalbhushanJhadav #PakistanisRejectICJ pic.twitter.com/PmTKFHW9T3

How can we not execute a foreign terrorist who was nabbed red-handed when we are hanging our terrorists? #KulbhushanJadhav @defencepk

And perhaps unsurprisingly, many Indians have celebrated.

The orders of the Int Court of Justice on #KulbhushanJadhav is a matter of great relief for all the people of India. https://t.co/q1EvS9tz7r

We r all with u from bottom of our hearts #KulbhushanJadhav and his family. https://t.co/2rVf1obRxz

The case also highlights the power of Pakistan's military.

Pakistan have long alleged involvement of foreign agents in funding and training terrorists across different cities in the country, but specifically the province of Balochistan where the military has faced stark criticism for human rights violations including the enforced disappearances of nationalists.

There's precedence of alleged Indian spies being tried in civilian courts in Pakistan, such as Sarabjit Singh, who claimed to have crossed the border under the influence but authorities insisted he was a spy. There's also the case of Kashmir Singh, who was sentenced to death by both civil and military courts but later pardoned.

It also raises questions about how Jadhav, an Indian national, was able to secure a Pakistani passport under an alias.

A sincere confession? A wannabe spy?

In March 2017, a year after his arrest, Pakistan military's media wing the Inter-Services Public Relations (ISPR) released a video statement in which Jadhav is seen admitting to being involved in terrorism in Balochistan and the Pakistani city of Karachi.

In the video, Jadhav says he is a serving officer of the Indian Navy and was gathering intelligence for Indian agencies under a fake Pakistani identity when he was arrested. India has since questioned the authenticity of the video and accused its neighbor of torturing Jadhav into giving a forced confession.

While Pakistani officials claim Jadhav to be a spy, the Indian central government has refuted these allegations. Various media have characterized Jadhav as a former naval officer who ventured into marine engineering and gypsum-shipping business in the Chabahar port.

However, reports by the Indian Express journalist Praveen Swami state Jadhav had indeed offered his “spying” services various times to India's Research and Analysis Wing (RAW), but was dismissed as a “high-risk fatalist”.

It's about facts, not nationalism

Recently, Pakistan stated it will put together a new team of lawyers to further argue the Kulbhushan Jadhav case at the ICJ. Meanwhile, India hailed ICJ's decision and is also preparing for the next set of hearings in the case.

As the ICJ demands facts from both sides, it’s crucial that the jingoism that’s playing out in online conversations, mainstream media, and politics on both sides comes to an end so that the issue can be handled with the seriousness it deserves.