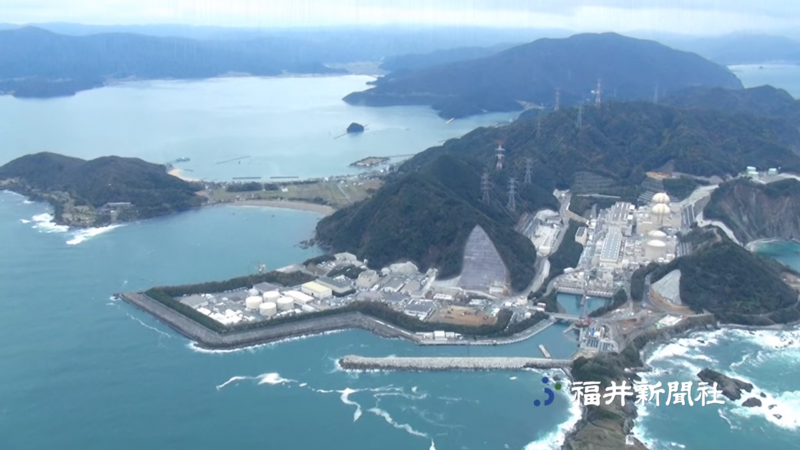 This was the second nuclear reactor to be restarted at Takahama, and brings up to five the number of reactors restarted across the country after being shut down following the the “triple disaster” (earthquake, tsunami and nuclear disaster) that struck Japan in March 2011.

Earlier in May, a sixth reactor in Oi, a municipality neighboring Takahama, was also given the green light to restart. The reactor restarts in Fukui are welcome news to small, geographically and economic isolated host communities.

However, residents in one of Japan's most densely populated regions just to the south are fearful about the potential for another massive nuclear accident.

When a massive tsunami on March 11, 2011, set off a nuclear crisis in coastal Fukushima prefecture, 54 nuclear reactors were shut down across Japan. The meltdowns and release of radioactive isotopes at the nuclear power plant in Fukushima exposed flaws in Japan's disaster management protocols. As nuclear installations were inspected one-by-one, some, such as the plant at Hamaoka, on Japan's Pacific coast, were shut down due to danger from tsunamis or because they have been shuttered over active earthquake faults.

Still other nuclear power plants remain closed because of court challenges by citizens concerned about the catastrophic consequences of another nuclear accident. An injunction that kept the Takahama nuclear complex closed was overturned by a higher court in 2016, paving the way for this month's restart, while the neighboring Oi plant still faces another court challenge aimed at keeping it shut down.

For now, some Oi residents are happy the power plant will resume operations. In a May 25 article with the title “Oi Approval: ‘We're On the Road to Getting Our Old Lives Back,’ Say Celebrating Local Residents,” local paper Fukui Shimbun captures a few of the local responses to the news of the reactor restarts.

Araki Kazuyuki (63), head of the Oi Township Chamber of Commerce said, “This is one small step forward”, and expressed his happiness about the restart decision. “I hope this helps local hoteliers and other small businesses that are part of the local economy.” He hopes for an increase in customers in the region.

The shutdown of all reactors across Japan was devastating for many local host communities where nuclear power plants are the backbone of the economy. In coastal communities such as Oi and Takahama in Fukui Prefecture, there is no other industry. The development of nuclear power plants over the past fifty years has generated a number of secondary industries. Construction companies are needed to maintain the nuclear power plants, and privately operated dormitories and other lodgings have grown up to cater to the armies of workers at the plants.

On top of that, nuclear power companies pay the equivalent of  billions of dollars in tax revenue and subsidies to local governments. The sudden decline in revenues for host communities has been devastating.

As a result, according the Fukui Shimbun, some residents of Oi are happy that the nuclear power plant will restart:

A housewife in her sixties said, “We invited the nuclear power plants to our community (forty years ago) to revitalize our economy. It makes no sense to keep them idle.”

Fifty years ago, when the power plants were first planned, the region, known as the “backside of Japan“, lacked most of the basic infrastructure built up during Japan's economic miracle. For many, the nuclear power plants represent progress and jobs:

A man in his seventies, when asked about why Oi originally invited nuclear power plants to be established here, said, mentioning roads that were built, that, “Our town has been totally transformed because of the nuclear power plants. If they restart (the Oi plant) I hope they start hiring again.”

Despite this, not everyone is happy. Mikazuki Taizo, the governor of Shiga Prefecture, parts of which lie within a 30 km evacuation zone covering five nuclear installations in Fukui Prefecture to the north, said in a statement: “Considering that the people of Shiga are still deeply worried about the safety of the nuclear plant, conditions are not set for us to accept its restart.”

Shiga governor: “Conditions are not set for us to accept its restart.” Oi No. 3, No. 4 reactor restarts.

It is not just the problem of evacuating residents of Shiga Prefecture that worries Mikazuki. Lake Biwa, which supplies drinking water to Shiga residents as well as nearly 15 million people in Japan's densely populated Kansai region, would likely be polluted by any nuclear accident — in the days following the March nuclear disaster in Fukushima, the damaged reactors released radioactive cesium isotopes across the communities surrounding the power plants. 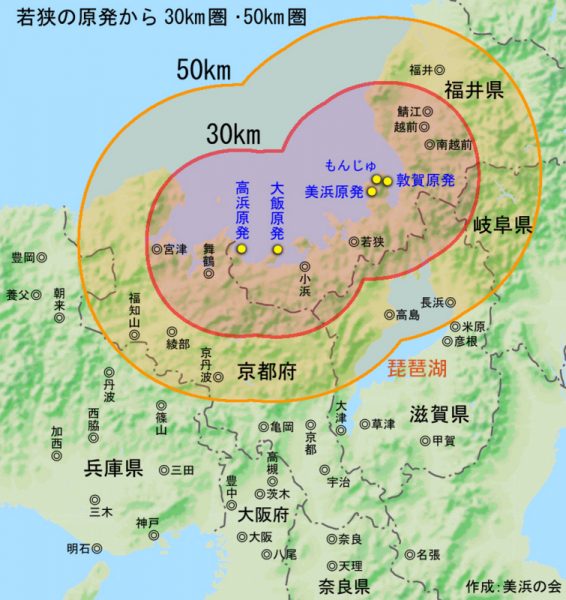 Location of nuclear reactors near Lake Biwa and the densely populated Kansai region of Japan. Yellow dots indicate nuclear facilities; the city of Kyoto is in the center of the map, with Kobe and Osaka below. Image widely shared on social media.

One resident of Shiga Prefecture tweeted that he couldn't understand the need to restart the nuclear power plants. He pointed out that electricity consumption has actually declined in Japan over four successive summers, when electricity usage should be highest because of the need for air conditioning to deal with Japan's torrid summers.

Article title: Kansai region powered by nuclear for the first time in four years. However, there seems to be enough electricity (without nuclear power).

He also pointed out that millions of people are put at risk because of the nuclear power plants.

If an accident happens at the Takahama nuclear power plant, Lake Biwa will become polluted and it will be a massive blow against the population here. And it won't be just residents of Shiga Prefecture. People in Kyoto and Osaka who rely on Lake Biwa for drinking water will be affected.

Since we have enough electricity without nuclear power, I don't understand why we need the reactors to restart. I think it's just to benefit special groups.

Politician Fukushima Mizuo, of Japan's Social Democratic Party, also weighed in at the end of May, following the decision to restart the Oi reactors:

I'm in Shiga Prefecture. I spent a night on the shores of Lake Biwa. It's truly a lovely lake. It restores my spirit. Whenever I come to Shiga my thoughts go to Lake Biwa, so I believe we must abandon nuclear power with all my heart.