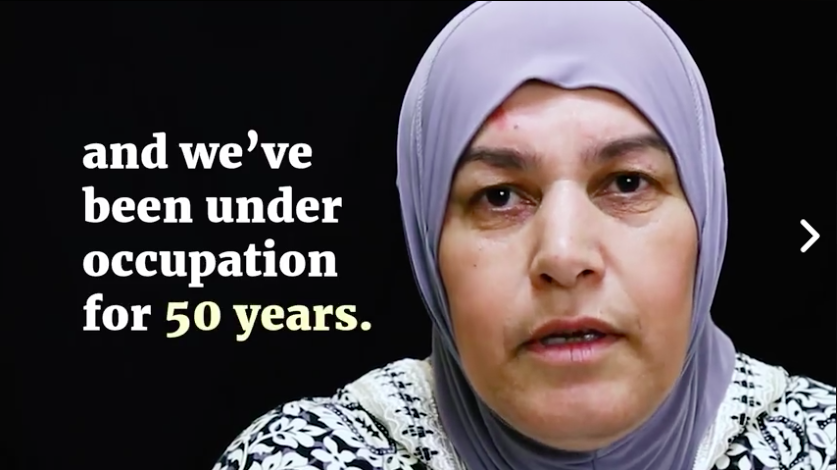 There are two dates ingrained in the memory of the Palestinian people.

The first is May 15, 1948, the date which marks the expulsion of over 700,000 Palestinians and the destruction of their towns and villages by Zionist Jewish militias. A day before, the state of Israel was established and the contours of historical Palestine were forcibly changed.

The second date is June 5, 1967, when Israel occupied the rest of the Palestinian territories, the Egyptian Sinai Peninsula, and the Golan Heights in Syria after it had won the Six-Day War against neighboring Arab states.

It has been fifty years since Palestinians have been subjugated to the longest-standing military occupation in modern history.

But what does half a century of life under military occupation look like?

To mark fifty years of occupation, Palestinians and other human rights supporters shared their experiences online, using hashtags #occupationis and #50YearsofOccupation, about the daily suffering, oppression, institutional discrimination, and abuse of basic of rights of Palestinians by Israel.

#50YearsofOccupation, I am facing 18 military charges for being a human rights defender . #Occupationis

#occupationis a visible and invisible power interfering in the biggest decisions of your life and the simplest ones.

A mother out of answers explaining the horrific scene of soldiers pointing rifles at kids on our way to visit our grannies. #Occupationis

I can't I build a house on my own land because it's close to a settlement!!!My land was there long before settlements #occupationis

#occupationis to detain people in jail with no charge, no trial under administrative detention

The social media campaign #Occupationis was launched by the Palestinian Task Force on Public Diplomacy in commemoration of the 50th anniversary of the occupation.

Other organizations also featured Palestinian voices who told their stories under occupation.

Fadwa Khalil was nine-years-old when Israel occupied the West Bank and displaced her family for the second time in 1967.

The first time was in 1948. She now lives in the Jalazoun refugee camp near the West Bank city of Ramallah, and still dreams of having the freedom to visit her hometown in modern-day Israel.

Palestinians living in the occupied West Bank and Gaza are not allowed into Israel, and if they are, they require a special permit from the Israeli military authorities.

In order to restrict the movement of Palestinians like Fadwa, Israel has installed tens of military checkpoints across the West Bank and along the 1967 ‘Green Line‘.

These checkpoints are manned by Israeli soldiers who check every passerby, subjugating them to long waiting hours under inhumane conditions, rain or shine. This is in addition to ubiquitous cement blocks and dirt used by Israeli soldiers to temporarily block off roads entering Palestinian villages.

In fact, Palestinians in the West Bank are prohibited from traveling on 41 roads which span a total of over 700 kilometers in combined length, while Israelis can use these roads freely.

Palestinians living in the Gaza Strip fare even worse, and have been living under a complete Israeli military and economic blockade since 2007. Traveling in and out of Gaza, which is often described as an open prison, requires minor miracles.

The ongoing blockade, the stagnating economy, and the three consecutive wars that have pounded Gaza made the UN declare that the Strip will be unfit for humans by 2020 if such conditions continue.

But restrictions on freedom of movement are only part of the story.

Human Rights Watch summarized in a video four major violations of human rights by Israel including unlawful killings and other war crimes carried out with impunity; forced displacement; abusive detention; and the development of settlements that are accompanied by discriminatory action against Palestinians.

There are around 300,000 Israeli settlers living in East Jerusalem and 350,000 more living in constructed settlements in the West Bank.

In December 2009, a group of Israeli settlers, accompanied by Israeli armed forces, took over part of the home of Rifka Al Kurd, a 87-year-old Palestinian woman who lost her home in 1948 and now lives in the Arab neighborhood in East Jerusalem.

The settlers had already took her son's house and proceeded to empty her house of her belongings and throw her furniture out on the street.

“We often are physically attacked: they sent my daughter, who is aged 50, to the hospital four times. They know she has heart problems and they always hit her close to her heart,” Al Kurd said.

Demolitions of Palestinian homes (and also structures connected to agriculture) are also symptomatic of the occupation.

Since 1967, Israel has demolished 48,000 Palestinian homes under the pretext of their lacking building permits, which are almost never issued to Palestinians by Israeli authorities.

For example, on April 6, 2016, the Israeli authorities demolished six homes in the Palestinian community of Umm Al Khair, a tiny village near the West Bank in South Hebron Hills and home to roughly 70 Palestinian Bedouins.

To experience more closely how it feels living under occupation day by day, the Israeli human rights organization B’Tselem made a new interactive documentary entitled “The Invisible Walls of Occupation”, which offers a virtual tour of the Palestinian village of Burqah, near Ramallah. 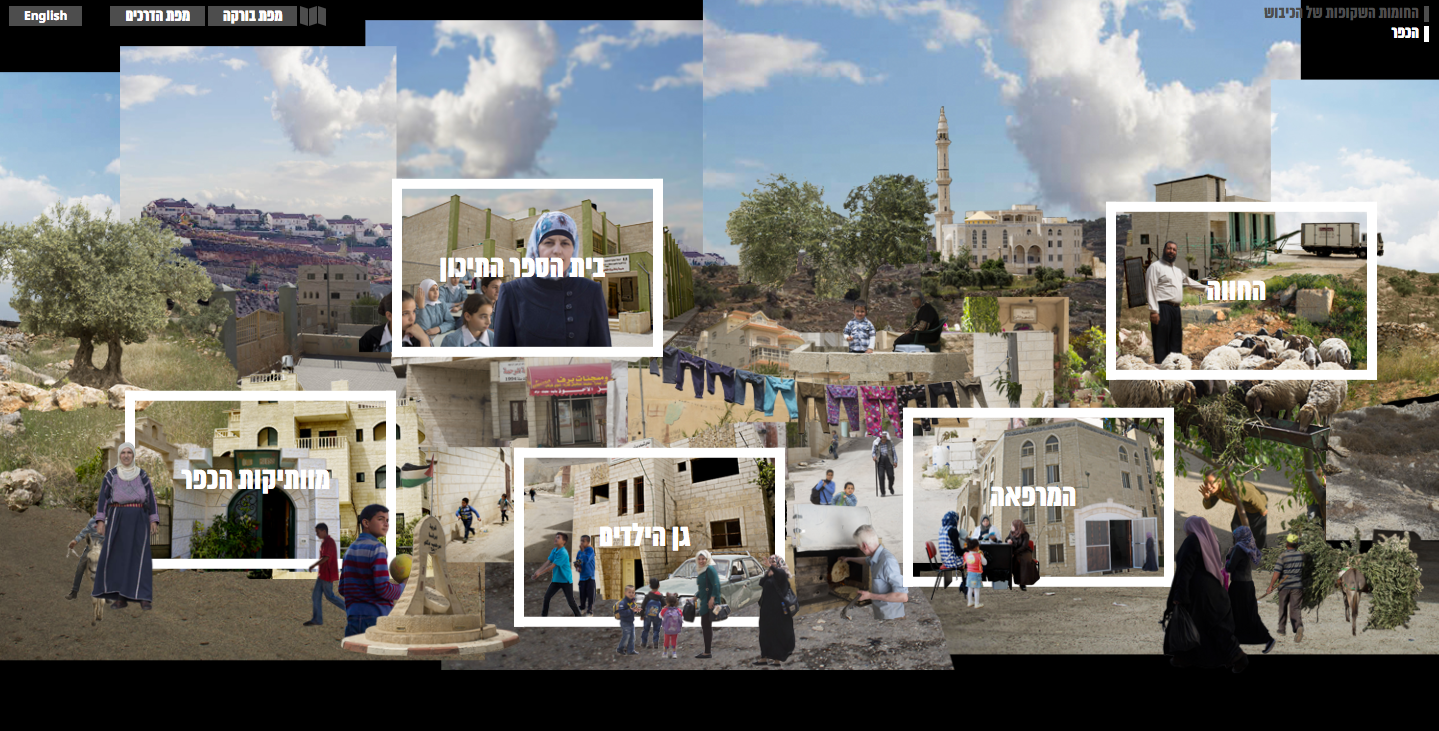 Screenshot from the Hebrew version of ‘The Invisible Walls of Occuation’. Source: B'Tselem

Its very ordinariness illustrates what life is like for Palestinians living under Israeli occupation.

The tour features a number of Palestinian voices, such as a Palestinian elderly, a farmer, and a Palestinian girl in high school who discuss the challenges associated with their daily lives.

An occupation without end?

So far all diplomatic efforts, brokered by the US and the international community, to reach a peace agreement between Israel and the Palestinians have failed.
Israeli leaders have demonstrated explicitly that they have no intention of ending their military occupation of 4.8 million people living in the West Bank, East Jerusalem and Gaza.

Israel’s leaders have made it clear that they have no intention of ending the occupation of the West Bank, Gaza, & East Jerusalem #Marking50 pic.twitter.com/Cwyip6aVqy