After Discharged Patient Dies on Hospital Grounds, Netizens Ask, ‘What About Compassion?’ 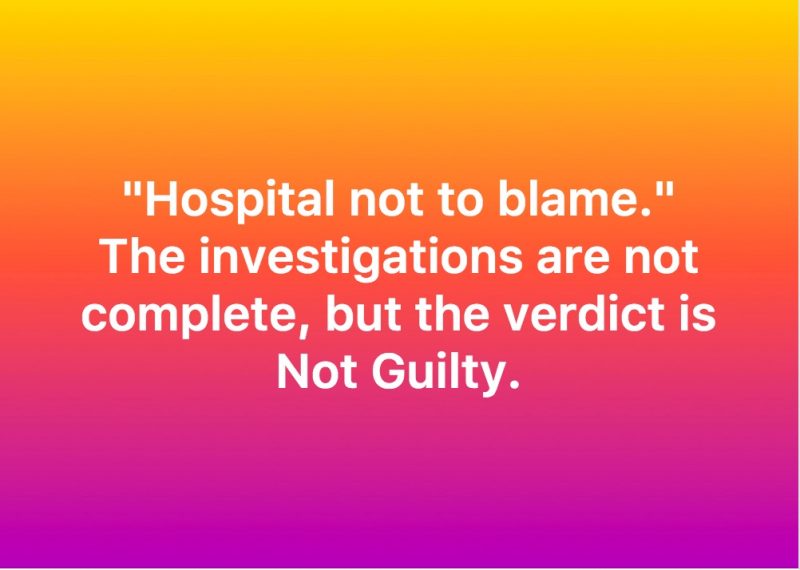 Facebook status update by Patricia Worrell, which says, “‘Hospital not to blame.’ The investigations are not complete, but the verdict is Not Guilty.”

If the worth of a society is measured by how it treats its most vulnerable, then Trinidad and Tobago has sunk to a new low, at least according to the judgement handed down by the court of social media. But does online outrage over a video of an elderly man dying on the premises of the Port of Spain General Hospital accurately reflect what happened? The country's health minister, who is in the minority, says not.

A video posted on Facebook on June 7 showed an elderly man lying on the grass in the front of the hospital's compound. The woman who was recording the video can be heard telling another who went to alert hospital authorities, “He went Casualty and they discharge (sic) him — and the security and them come and bring him and put him here. They ‘gloves up’ and they bring him and rest him here, and the man sick.”

(‘Casualty’ is how Trinidadians typically refer to the hospital's Accident and Emergency department).

Towards the end of the video, the woman confirms that hospital security said he was discharged and the only way for him to be readmitted to A&E was for an ambulance to bring him, which she described as “madness”; she also said that guards told her she couldn't record any footage. For much of the video, the man, who said his name was Christopher Phillip, shifted restlessly on the ground.

As soon as the video started to make the rounds on social media, netizens expressed their sadness and dismay. On the Ministry of Health's Facebook page, ‎Karen Awah-Gio‎ posted:

I'd like to lodge a complaint on behalf of the elderly gentleman who died on the lawn of the POSGH, Mr. Christopher Phillip. […] I could not sleep last night thinking about how this man was left to die in the grass on the compound of one of our major health institutions. Please do not let this be another ‘investigation’ which comes to nothing because the next tragic incident has taken away focus. What happened to Mr. Phillip is inhumane and what looks like a cover up is extremely disturbing.
🙏🏽 Mr. Minister, I implore you.

The North West Regional Health Authority, which oversees the functioning of the hospital, issued a press release stating that a full investigation has been launched into the matter and that “preliminary reports indicate that Mr Phillip was brought into the hospital yesterday evening via ambulance and was seen at the Accident and Emergency Department”:

He was treated following all protocols of care and was later discharged.

Subsequently, Mr Phillip was seen lying on the floor outside the department and was assisted by members of staff back into the department to be seen a second time. Mr Phillip then left on his own accord. His body was later discovered on the front lawn of the hospital’s compound.

This statement contradicts other eyewitness accounts, which allege that Mr. Phillip was escorted out by security.

In parliament, Minister Terrence Deyalsingh's position was that officials at the North West Regional Health Authority were not culpable in Phillip's death.

Officials cannot detain someone and constrain someone and treat them without their consent. The health authorities, the doc­tors and nurses, treated Mr. Phillip twice on the same day. Mr. Phillip disappeared on his own volition. There is no guilt, there is no process to be fixed…all protocols were followed and he received the best of treatment. But he disappeared twice after being told to wait.

So, if an elderly patient has dementia and insists on discharging himself from the Accident and Emergency Unit, the ‘protocol’ permits this? I once had a friend who was being treated for mental illness who more than once attempted to check himself out. There appeared to be some kind of protocol to keep him on the ward even against his will.

Patricia Worrell, who is not particularly confident in any of the country's public health facilities, observed:

Not sure what he's like in his private life, but Minister Deyalsingh does not do compassion well. He bristles up like a frizzle fowl in crises when he should be showing empathy.

I am not surprised that the initial response to the guy who died outside the POSGH is “no one at the hospital is to blame”. When anything goes wrong in this country no one is ever accountable. That response by Terrence Deyalsingh in the senate is as pathetic, narrow minded and callous as ever. An old man dies an undignified death and the honorable minister says the man disappeared from the eyes of hospital staff. The guy could hardly stand so I don't know how he was able to sign the discharge forms and disappear in that condition. This is very shameful but it is actually a true depiction of what is taking place throughout this country. The Minister of Health continues to tolerate and defend a ministry and its personnel who have no idea what the duty of care means. Whilst he continues to live in a state of utopia, the citizens continue to suffer and die undignified deaths as a result of a mismanaged health system.

Though fewer in number, some netizens did support Minister Deyalsingh's position.

When we look at a situation, we need to separate our feelings from the facts of the situation.
Doctors, nurses, EMTs, and even first-aiders CANNOT administer any form of medical assistance to any patient unless the patient gives them permission to do so. The only exception to this is when the patient is unconscious or mentally ill, when it is assumed that the patient would accept the treatment. Failure to do this can result in lawsuits. […]

I am very sure that those very same people who are criticizing the POSGH could not last for one 36-hour shift in the shoes of a doctor or a nurse.

Still, much of the discussion on social media platforms was about the ineffectiveness of the public health system.

The quality of health care in this country irrespective of government administration or recession is deplorable. […] Too much hard heartedness by a lot of people in the medical fraternity […] It's disgusting. And as usual, the people who are really responsible for this state of affairs […] aren't held accountable. A crying shame! 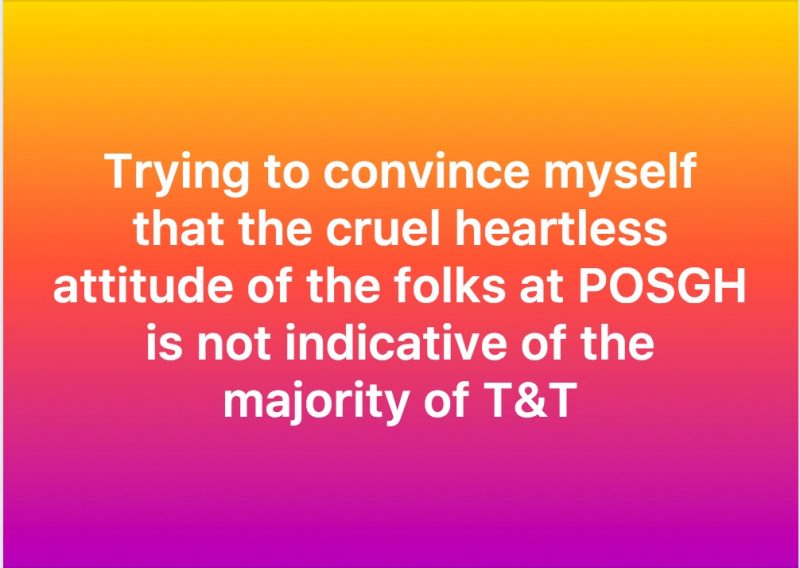 A public Facebook status update by Deborah O'Neil, which says, “Trying to convince myself that the cruel heartless attitude of the folks at POSGH is not indicative of the majority of T&T”.

Alvin Fortune, who had a similar experience at a different hospital, made the point that the treatment the patient received went far beyond politics:

This transcends PNM and UNC [the country's two major political parties]. This is symptomatic of the callous disregard of many doctors, nurses and the people who work in close proximity with them locally. It has been going on in this country for years. […] It was bound to come to this eventually. The majority of us who have accessed ‘care’ at public institutions can attest to the disrespectful way we are spoken to or ignored. How sick old people are roughed up. […]

So none of this surprises me but it saddens me deeply. We have that kind of heartlessness in our hospitals and we want to end crime? That is a crime right there. Everyone who works at POSGH and came into contact with that man and was empowered to help him should be jailed. […] But it would not surprise me if there is no record of any person who worked that shift.

There were also social media users who found the recording and sharing of the video problematic.

How is it, upon seeing someone in need of assistance, that your first instinct is to whip out your phone to record the incident? Why not just render assistance? Do likes and shares mean that much to you? […]
Get your priorities in a gear, people.
Help first.

Alvin Fortune, however, felt that recording the incident was important and that the woman who posted the video did her part to help:

If nobody videotaped the […] man dying outside the POSGH then only those who saw would know. If they attempted to spread the word without evidence, there would have been denial by the hospital […] The chances of the man getting justice in death would be slim. The chances of perpetrators being brought to account would be slim.
I am glad there is clear video evidence of the heinous negligence by workers at the hospital so no one can twist the truth and escape.
Sometimes videoing is helping.

Still, Josie Ache-De Goulard wished that people would “THINK about this gentleman's family and immediate friends” and stop sharing the video.

Finally, Taran Rampersad criticised how the media handled the story:

So, if you missed it, some gentleman was dumped outside of the hospital in Port of Spain and denied treatment until he was returned by ambulance despite being right in front of the hospital itself. And he died there, with someone doing a Facebook live video of his last MINUTES […] and the local media showing him in his last pose on the ground.
It's horrible. And while that should be enough to piss any human being off, what REALLY pisses me off is the way the Trinidad and Tobago media handled it.

They treated a man stripped of his dignity as if he HAD no dignity, writing and reporting so poorly as if he didn't deserve that dignity. […]

It's no wonder life is not valued as much as it should when the media – when journalists, writers, photographers, editors, etc – when they strip away the veil of human dignity permanently so that it's archived, so that a Google Search will only show an end rather than any dignity he might have had during life. […]

Shame. He deserved better, just as you would. And if you don't know that, you do now.