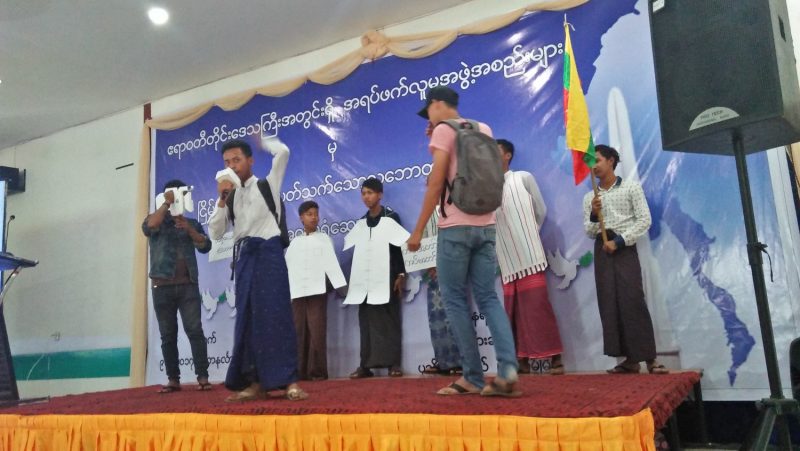 This article by Salai Thant Zin and English translation by Thet Ko Ko is from The Irrawaddy, an independent news website in Myanmar, and is republished by Global Voices as part of a content-sharing agreement.

An online defamation provision in Myanmar's 2013 Telecommunications Law is being used by government officials, especially the Burmese army, to harass critics, reporters, and activists in the country.

A local human rights leader in Pathein province was arrested on June 4, 2017 after he was charged under article 66(d) of the Telecommunications Law for live-streaming a play that was critical of military clashes with ethnic armed groups on Facebook.

Police arrested U Tun Tun Oo, leader of the Human Rights Activists Association, for streaming the drama entitled “We Want No War” staged by high school students and undergraduates of Pathein University during a peace discussion in Pathein on January 9, 2017.

Personnel of the Burma Army South Western Command filed a lawsuit against him at Pathein Central Police Station under section 34(d) of the Electronic Transactions Law. But police sought legal advice from township law officials who suggested charging U Tun Tun Oo with article 66(d) instead.

U Tun Tun Oo was brought to trial at Pathein Township Court on Monday.

“I streamed it live so that my friends could watch it because my son participated in the drama. I did not intend to defame the military,” he told the media.

The Myanmar Army also sued nine students involved in the drama for defamation.

Since the enactment of the Telecommunications Law in 2013, there have been a total of 67 cases filed under article 66(d), according to a local research group led by a former prisoner Maung Saung Kha, a poet who was jailed under the same charge in 2016.