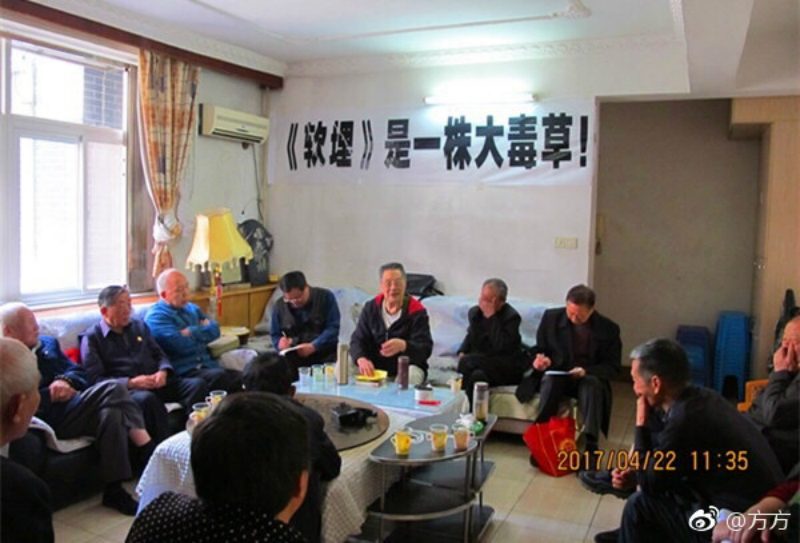 A banner in a literature criticism seminar in Wuhan calls “Soft Burial” a “poisonous plant”. Image from Fangfang's Weibo.

The Chinese government has recently banned the sale of an award-winning novel, “Soft Burial,” written by Fang Fang about China’s land reform in the 1950s.

The novel tells the story of an old woman who suffered from amnesia after she witnessed her husband’s entire family driven to take their own lives during the Chinese Communist Party's nationwide land reform, which aimed to eliminate the landlord class not long after the People's Republic of China was established in 1949. The buried memories haunt the woman throughout her life, and her son decides to investigate her past.

The suicides tied to the land reform are not an invention of the novel. In addition to public executions, the class struggle resulted in tens of thousands of landlords and better-off peasants killing themselves. There are no official records of exactly how many were killed during the land reform, but estimates by Chinese and US scholars have ranged between 1 and 5 million.

“Soft Burial,” originally published in 2016, won the 2016 Luyao Literature Award, a tribute to its historical realism. Fang Fang explained the title of the novel in her postscript:

When people die and their bodies are buried under the earth without the protection of coffins, this burial is called a “soft burial”; as for the living, when they seal off their past, cut off their roots, reject their memories, either consciously or subconsciously, their lives are soft buried in time. Once they are in a soft burial, their lives will be disconnected in amnesia.

Ahead of the announcement of the Luyao award on April 23 2017, a literature criticism seminar organized by the Worker, Peasant and Soldier reading group in the city of Wuhan concluded that the novel is a “poisonous plant”:

An attack on the land reform… aimed at resurrecting the spirits of the landlord class… and hence a poisonous plant against communism.

Similar gatherings that are critical of the novel have also taken place in other cities, including Zhengzhou.

Former Chinese Communist Party leaders have also published their rebukes of the novel. Former head of the Central Organization Department Zhang Quanjing wrote a political struggle-style piece denouncing it, titled “Soft Burial is a reflection of ideological class struggle in the current terrain”:

Lieutenant General of the People’s Liberation Army Zhao Keming extended the criticism to a number of contemporary novels:

Though historical nihilism has been criticized by the party and the people, it has been spreading in different forms. In addition to the poisonous historical research, university lectures and public forums, it has been very rampant in the field of literature. “Soft Burial” is just the latest published novel to explicitly attempt to vindicate the landlord class and criticize the land reform. Before its publication, novels such as “To Live,” “Life and Death Are Wearing Me Out,” “White Deer Plain,” “The Ancient Ship,” etc., have not been criticized in mainstream media. The writers have not been denounced by their leaders in their work or party unit. Some of them have even reached high positions, received praise from fans and followers. Objectively, this has given birth to a trend that sees subverting history in writing is the ticket to success and a bright future.

The wave of criticism culminated in the novel's ban.

However, a digital copy was circulated online and won readers’ applause. Many found the novel inspiring and wrote their commentaries on social media. Quite a number complained that their comments were reported, deleted and “soft buried.” Below are a number of comments still circulating on the popular platform Weibo.

A reader from Chengdu said:

The story is well told…unrelated characters come together in the end. But I really don't like the ending, why not dig into the truth, why let his parents’ history remain buried? Such a coward and lack of filial piety. Maybe this is the writer's intention, to let the readers feel the sense of soft burial because it is a reality that we are facing in our lives.

A reader from Shandong reflected:

No incident has absolute truth.
What matters is not the truth, but our attitude towards truth.
Perhaps we can never evaluate the past in a fair manner, but we have to right to question it.
A country should be open to confronting its history, or the historical baggage would become too heavy to bear.

And Fang Fang’s novel inspired one Anhui reader to write about his family history:

My great-grandfather was a servant working for a landlord. Because he was smart and diligent, he opened his own woodwork and dyeing workshops, bought land and became rich. He was a rich peasant but not a landlord. But he was labelled as a landlord during the land reform because he was at odds with those who led the reform. When they calculated his property, they included the land owned by my great-grandmother's family. Her family was a landlord but the land was owned by her brothers and had nothing to do with him. It was an excuse for revenge. I don't know how my great-grandfather died, but my great-grandmother was starved to dead in her own bed.

The father of my great-grandfather was a literati in the late Qing Dynasty. He was a teacher his whole life and left behind loads of books. They were all burned into ashes during the land reform.

My grandfather was studying medicine and agriculture in high school in town. He was getting ready to go to Fudan University. But he was labelled as the son of landlord and had to return to the village and became a farmer. He taught briefly in the 1960s but because of that, he was persecuted during the Cultural Revolution.

My family background is that of peasants and literati. Because of the land reform, all the books were burned, land confiscated. There was no other exit for them. They had suffered for many decades and shed tears and blood and they could not even cry and tell their stories aloud!