At Annual LGBT Event, Singapore Kicks Out Foreigners and Puts Up Barricade 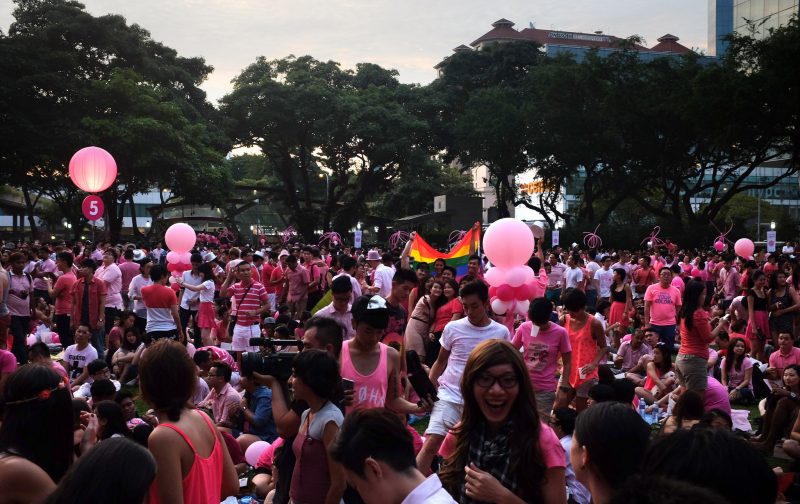 Since 2009, the “Pink Dot” event has become an annual celebration of LGBT rights in Singapore. Every year, tens of thousands gather at the Speakers’ Corner in Hong Lim Park to support gender equality, inclusivity, and free love through songs, speeches, family picnics, and various cultural presentations.

The ninth edition of Pink Dot is scheduled on July 1, 2017, but this time the government has imposed new regulations. First, foreign sponsorship is still prohibited; second, only Singaporeans can enter the park and join the event; and third, participants must show their government-issued identification cards as part of the program’s security measures.

In order to ensure the safety of the crowd and prevent foreigners from joining the event, the park will be barricaded — an unprecedented move, given that Hong Lim Park is the only place in Singapore where people can organize rallies and speak freely at a protest.

Singapore criminalizes homosexual acts among men, and past participants at Pink Dot have voiced criticisms against the colonial-era law.

Pink Dot organizers say the police recently reminded them about an amendment to the Public Order Act prohibiting foreigners from joining a public demonstration in the park. In response, organizers have expressed regret that foreigners will be barred from a Pink Dot celebration for the first time ever:

We acknowledge that this directly impacts and separates individuals with partners, friends and family who might not be Singapore Citizens or Permanent Residents and we are just as upset by this. Unfortunately, this was a decision that was taken out of our hands.

Singapore has 1.3 million foreign workers, while its domestic population is roughly 5.5 million people.

Pink Dot spokesperson Paerin Choa revealed that the decision to barricade the park was an imposition by the police:

The set-up of barricades and check points around the park was the only measure deemed acceptable by authorities; this was a decision taken out of our hands and is something we do not readily agree with.

Organizers warned their supporters that violating the law could result in a fine as high as S$10,000 (US$7,228) or even up to six months in prison. Despite the restrictions, Pink Dot organizers say there are now more than 100 companies and institutions that have reaffirmed their support for the event.

Writer Kylie Foo said she is concerned about the symbolism of putting a barricade around the park:

Singapore is wrong to reach for such a backward solution as militarized barriers around Hong Liam Park – the latter, in fact, echoes terrifying images of minority groups being contained and “rounded up” by authorities.

Kirsten Han questioned the rationale of prohibiting foreigners at an event that supposedly celebrates love and inclusivity:

The farce of an event about love, pride, inclusivity and acceptance being forced erect barricades would be hilarious if it didn’t have outrageous real-world consequences. These new laws are actually keeping families apart: Singaporeans with non-resident spouses or relatives will not be able to attend Pink Dot together. These “foreign” loved ones will have no choice but to stay away even as their local halves don pink outfits to celebrate the “freedom to love.”

Han added that barricading the park could set a precedent that might be used to undermine future protests.

Pink Dot organizers are confident, however, that Singaporeans will find a way to make the event successful on July 1:

…couples and families wanting to commemorate Pink Dot with us may be separated because of this. But we have faith in Singapore. And Singaporeans will eventually come through as they always had in the past 8 years.