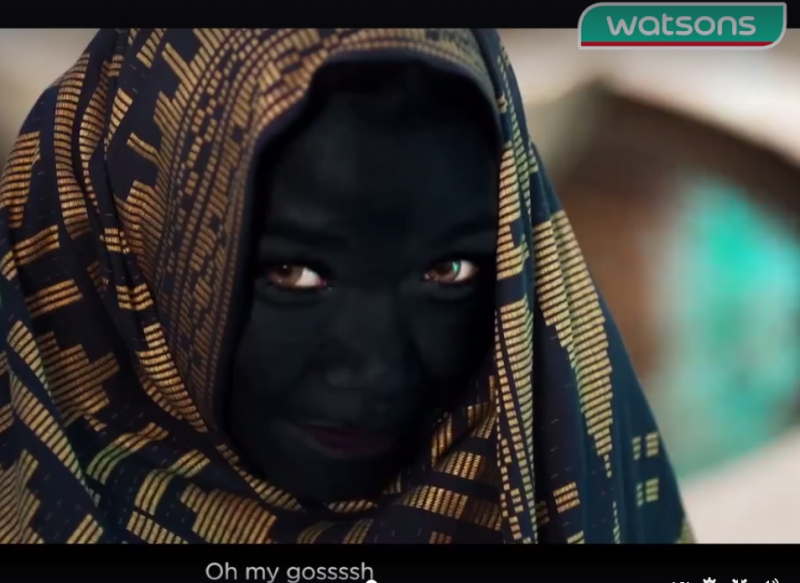 Screenshot from the video ad of Watsons Malaysia before it was removed on YouTube.

Health and beauty chain Watsons in Malaysia was forced to pull an online video ad featuring a woman “cursed with black skin” after netizens complained that it is racist.

The Watsons ad tells the story of a prince searching for the face behind the enchanting voice in his dreams. When he finally finds her, he is surprised to learn that the woman has dark skin. But after deciding to marry her, the prince soon discovers that the dark complexion was simply a test to prove his sincerity. The woman washes her face to reveal whiter skin.

The 15-minute-long ad featured some of Malaysia’s top stars. It was made to celebrate the coming Hari Raya (Malaysian term for Islam’s Eid al-Fitr, or the end of Ramadan). Malaysia has a dominant Muslim population but at the same time it boasts of having a multi-racial society.

This video by Watsons Malaysia for Hari Raya is being slammed for using blackface & suggesting black ≠ beautiful. https://t.co/LLpe3lKv0A [2] pic.twitter.com/yMyXWF4uPI [3]

After the ad was uploaded on YouTube, netizens quickly criticized it for promoting racism and sexism.

I have been a loyal customer for years. With this super sexist, orientalist and racist ad, I am boycotting Watsons Malaysia #disappointing [5]

So not cool, #WatsonsMalaysia [7]. Pull out the ads and sign your boss and agency up for social sensitivity 101 class please. https://t.co/xz4jrl3nkS [8]

Watsons removed the video a few hours after its release, although it can still be viewed [10] on other Facebook pages.

A writer for news and entertainment site Coconuts KL thought the ad borders on hate speech [11]:

In a country like Malaysia, where we have so many races, cultures and people coming together, to say that the darker ones are ugly is so out of touch, so wrong and so damaging to the self-esteem of every single person out there who is on the more-tan part of the spectrum, that this video verges on the fringes of hate-speech.

Watsons explained [12] on its Facebook page that the ad is a retelling of a Malaysian folklore:

The Legend of Dayang Senandong is a Malay folklore about a lady who was born cursed with black skin but blessed with a beautiful voice. The legend depicts that the king fell in love with Dayang Senandong because of her voice and inner beauty.

It added that what it aimed to highlight in the ad was that true love exists:

We stand firm on the belief that unity and fairness plays an important role, and we respect people from all nationalities. The video was shot to highlight the Legend and its moral values of inner beauty and that true love exists. We are sorry that some of our fans feel offended by the video which was not our intention.

But some netizens believe Watsons did not properly apologize for its racist ad and that its statement actually blamed the public for misreading the message of the video.

Perhaps sensing that many Malaysians are still angry over the ad, the country head of Watsons Malaysia also issued a statement profusely apologizing [13] for the video.