Image from the Facebook page of ‘Protection for Journalists Committee’ – Myanmar

More than 100 journalists in Myanmar gathered on June 6, 2017 in Yangon, the country’s capital, to plan their campaign against Section 66(d) of Myanmar's Telecommunications Law.

The law was passed in 2013 when Myanmar was still ruled by a military-backed government. It has 86 sections but the most infamous part of the law is Section 66(d) which refers to online defamation. Army officials often used this section to charge activists, journalists, and their other critics with defamation.

Section 66(d) states that whoever uses a “telecommunication network to extort, threaten, obstruct, defame, disturb, inappropriately influence, or intimidate” can be “punished with imprisonment for a term extending to a maximum of three years, and shall be liable to fine or both.”

For many activists and journalists, the wording of this provision is vague and it can be narrowly interpreted to accuse anyone of defaming another person.

When the National League for Democracy (NLD) overwhelmingly defeated the military-backed party in the 2015 election, many hoped it would usher a new era of democratic reforms in Myanmar. Indeed, the new government released hundreds of political prisoners and it revived the peace process with ethnic armed groups. But many of the laws passed during the junta era remained in effect, including the Telecommunications Law.

Since 2016 when the new government assumed power, 61 defamation cases have been filed under Section 66(d). Out of these 61 cases, 14 involve journalists who have been charged and are awaiting trial. To the surprise of many, NLD officials were among those who endorsed the use of Section 66(d) against online critics.

The most recent arrest related to an alleged violation of the law involved an editor and a satirist who mocked the military’s peace efforts.

Worried about the continued rise of Section 66(d)-related cases, the 100 journalists who met in Yangon formed the ‘Protection for Journalists Committee’ and elected 21 committee members who will lead the campaign to amend the Telecommunications Law. The committee has three objectives:

a) To amend and abolish the laws that oppressed media freedom, such as article 66(d) and other unjust laws;
b) Government, military and other institutions must drop immediately the charges under 66(d);
c) To achieve these demands, the committee will work hand-in-hand with civil society groups, and citizens.

The group is initiating a campaign encouraging journalists to wear a white armband with a printed message of ‘Freedom of Press’ during the court hearing of journalists charged with defamation. 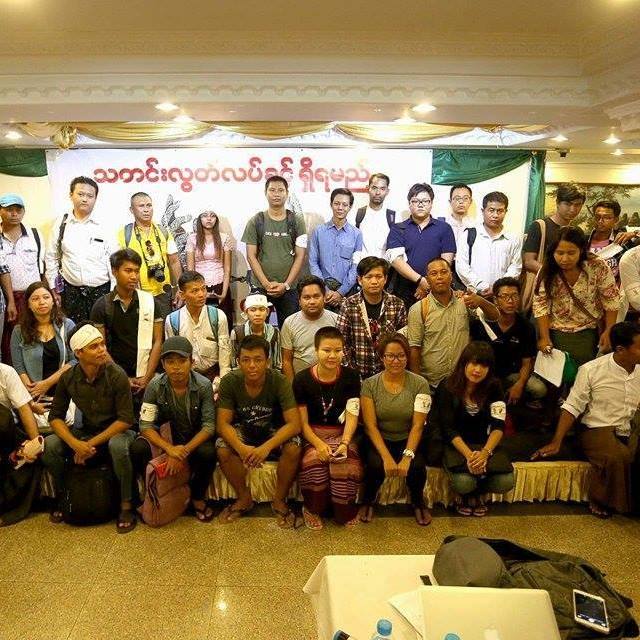 Some of the journalists who established the ‘Protection for Journalists Committee’ in Myanmar. Source: Facebook

Many people believe that the previous government, run by ex-generals, created such a legal mechanism to be able to sue those who stood against their administration.

What surprises me is why the NLD government or its Parliaments have let its members and supporters apply this controversial law created by the previous government against individuals today. Even high-ranking officials of the NLD administration and the party have turned to 66(d), rather than more standard defamation charges described in penal codes.

Myanmar Information Development Organization director Htike Htike Aung pointed out that the law is being abused and needs to be revised:

The main objective of this law is to promote development of the country and the upgrading of technology and also to protect the customers. But we have not seen yet any tangible protection given to the people so far. So in this Telecommunication Law we need to review the entire law, not only the section 66(d).

The Myanmar government has yet to issue a response to the demand of the journalists.