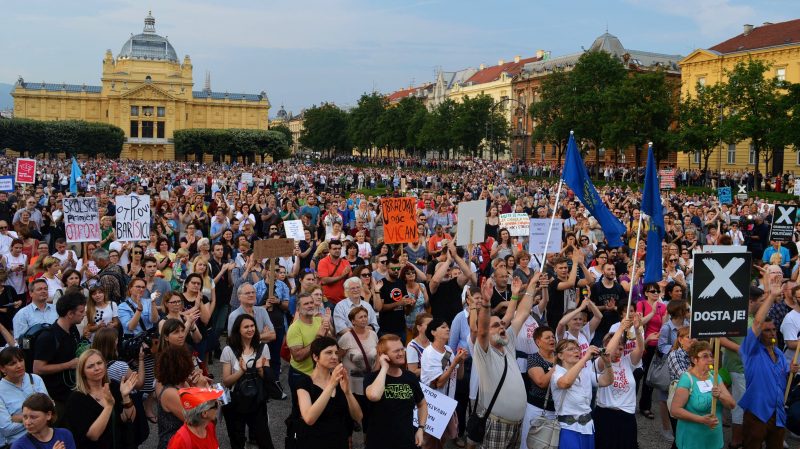 Despite the rains on June 1, 2017, over 20,000 protesters marched through the center of Zagreb demanding educational reforms in Croatia. Around 10,000 more protested in the bigger cities of Split, Rijeka, Zadar, Poreč, Karlovac, Osijek and Slavonski Brod.

The protests were organized by the GOOD Initiative which advocates the inclusion of civic upbringing (Građanski odgoj i obrazovanje) in the educational system. The initiative is composed of 45 nongovernmental organizations which have been working together since 2008.

The protest was a repeat of the massive gathering in 2016 when 50,000 Croatians demanded the implementation of educational reforms. This year's protest highlighted the failure of the government to address the urgent demands of the protesting citizens.

Aside from revising the curriculum, some of the additional demands this year include the democratization of the school system by enabling the participation of educators in policymaking and the adoption of a clear evaluation guide for teachers’ work.

The main message of the protests was that the authorities must implement substantial reforms in the curriculum based on the input of educational practitioners, instead of relying on the recommendations of powerful partisan groups which have little expertise on managing schools.

Protesters carried signs reading “You failed the citizens,” “Enough is enough!” and “Educational reform is a [matter of] public interest!”

The current Croatian government, which came into power in October 2016, is dominated by the conservative center-right party Croatian Democratic Union (HDZ), which has close ties with the Catholic Church.

Some of the protesters carried banners decrying the influence of the Catholic Church on the public education system such as “It's not called clerical, but curricular reform” and “Opus Dei, Go Away.”

Protesters also blame the bad situation in the education sector for the massive brain drain experienced in Croatia. Some carried signs reading “We would like to go to the Moon, not to Ireland.” The Ireland reference is related to the fact that a large number of people with higher education, IT experts in particular, have immigrated to Ireland.

Another concrete demand of the protests was the resignation of the minister of education and science, who had been involved in a plagiarism scandal. The prime minister had already rejected this demand.

Protesters also demanded the resignation of Dijana Vican, the chair of the expert commission for the implementation of the Education, Science and Technology Strategy.

The protesters accused the public official of failing to protect the educational system from partisan groups which have been imposing policy reforms that allegedly ran counter to the principles of the constitution.

Croatian Minister of Education and Science Pavo Barišić denied the allegation that expert group selected by the government is composed of conservatives who would prevent the introduction of reforms in the education sector. He added that the members were chosen by merit in a transparent manner.

During the day of the protest, a talk show program in the public broadcasting company Croatian Radiotelevision invited prominent conservative academics who criticized Boris Jokić, the former official in charge of overseeing the implementation of educational reforms. Two members of the Croatian Academy of Science and Arts called the protests manipulative and shameful, the reforms a fiasco, and accused Jokić of “wanting to teach children that God doesn't exist.”

Journalist Zrinka Pavlić commented that their behavior was a perfect example of the tragic state of public debate about the educational reform issue. Instead of discussing how to improve schooling in Croatia, “loud ideological apologists only care about spreading value judgments that would discredit those who disagree with them.”

An earlier version of this post misidentified Zrinka Pavlić as Bojan Stilin.