Chronicles of a Concerned Venezuelan: The Landscape of Everyday Terror 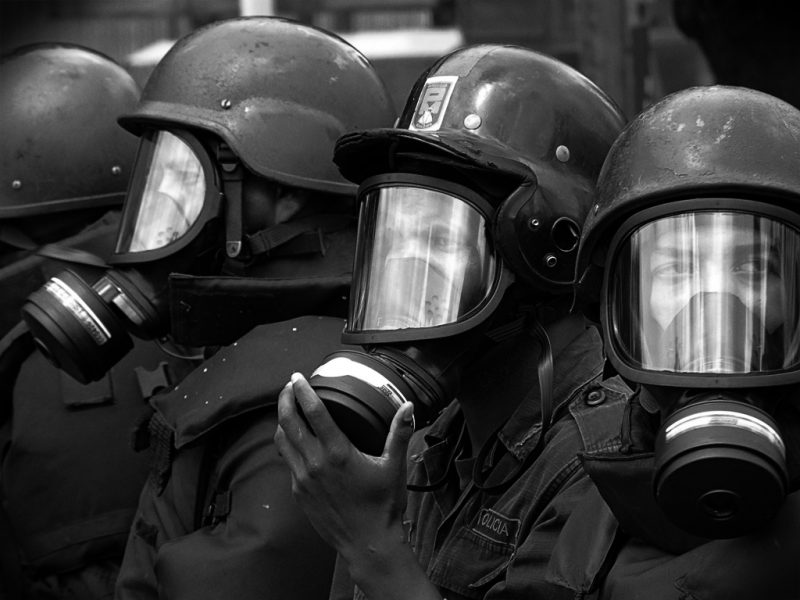 This post is the second of a series originally published by the author on Medium. Read here the first installment.

My five-year-old neighbor asks me this as he waits beside his mother for the elevator. His little face is pale, with violet bags under his eyes. His mother glances at me, worried and tired. I shrug, not knowing how to respond.

“My mom is also afraid,” he says quietly. “Every night, all of us at home get scared from the noises on the street. We don’t know where to run.”

My neighbor sighs, extends her hand and strokes the boy’s cheek. He hugs her, squeezing himself tightly against her waist. I remain paralyzed by a hazy, icy sense of anguish. I want to say the right thing, offer him some kind of comfort, say something that not only could ward off fear but protect him from the reality that we adults suffer. But, of course, I can’t— perhaps there is nothing I can say—so I just remain very quiet, out of frustration and helplessness.

Inside the elevator, three neighbors watch us silently as we ascend. Among the murmurs of courteous greetings someone starts to talk about what they read on social media about the targeted attacks in certain areas in our neighborhood that have joined the protests, about violence on the streets, night shootings in different parts of Caracas. I look at the boy, hiding his head in his mother’s body. His small hands tense against her clothing, his body stiff. His mother sighs and wraps her arms around him. But there is no way to protect yourself from information, from the tension, the asphyxiating climate of a country in crisis like ours.

I watched this boy grow up. I heard his baby cries at night, and stumbled upon him taking his first steps in the hallway of my building. His family is part of the everyday backdrop of my life, of sporadic encounters here and there. Suddenly, I think that in his five years of life, he hasn’t known anything other than the distress that fills every space of our daily lives. That he’s suffered impoverishment, persistent fear, the burden of overwhelming fear everywhere. A broken, wounded generation. Uncertainty as the only answer to the future.

When the doors open, the mother takes the boy into her arms and I see them walk down the partially lit hallway. The boy looks over his mother’s shoulder at me, his eyes sad, his cheeks tense. His mother kisses his head, whispers something to him—perhaps the very thing that didn’t occur to me to say to calm him down—and they walk down the street, their heads down, their bodies rigid. And I stand there thinking about everything we have lost, in all those silent spaces, devastated and grief-stricken, in a country full of scars.

I walk down the street looking at the people that pass me. Everyone has the boy’s burdened look, the one that I should have, except that I no longer care. In the last few weeks we’ve suffered the rigors of the nocturnal crackdown our neighborhood endures, the constant fear of what could happen during attacks by strangers on motorcycles or on foot. Inexplicable explosions, the rush of stray bullets—all have become habitual. Suddenly, violence has permeated everything—part of small habits and the perception of normalcy. I find myself overwhelmed by the mere idea of the resignation it symbolizes, and yet the reality that prevails when you convince yourself that you should continue, that you need to find a certain sense of normalcy. What? I asked myself, somewhat violently. What type of normalcy can you find in this country right now?

There are no answers, of course, for something like this. I think about it when I get in line to buy a bit of bread, when I walk down the street trying to get around burnt garbage in which you can still smell the residue of tear gas. When I stop in front of the stone walls surrounding some of the buildings on the public square and make out a line of burnt holes smelling of gunpowder. As I brush over them with my fingers, I’m filled with disgust, terror. A kind of indefinite bitterness that has a lot to do with uncertainty. The awareness of living in a country where, in all likelihood, there is a bullet with your name on it.

The afternoon is peaceful. The street has the same look about it as it had during the almost 20 years that I have gazed at it through the window of my studio. There is an air of calm and deceptive tranquility, with blossoming trees stirring in the wind and the sporadic sound of traffic. And it amazes me that it is so easy to disguise the obvious, the rawness of what we’re going through. That veneer of fragmented and incomprehensible normalcy.

A military officer crosses the street carrying his regulation weapon across his chest. In the distance, it looks threatening, with the case and chest guard clearly visible. I see him circle the square, advance, stop at a corner. He rests his gun on the ground, standing still. A few minutes later, two more officers join him. And the seemingly ordinary street transforms into something else. Into a tacit threat, but one that is impossible to ignore. There is something allegorical in that image, in the fact that the police state is everywhere, a visible fragment between all conceptions of the daily routine.

When I was ten years old, perhaps a bit younger, I saw a tankette for the first time, that enormous military vehicle that has become part of the urban landscape in Venezuela when protests escalate. The first coup had just taken place and my street was being guarded by military personnel who terrified me with their uniforms, their clearly visible weapons, their aggressive air. But the most vivid memory I have of that time is the colossal silhouette of the tank that blocked off the street in front of my school. A metal hulk, looking old and dangerous. An impossible creature whose presence I could neither explain nor justify. I stood at its side, my bag on my shoulder, holding my grandmother’s hand nervously, not knowing why its form, silhouetted against the afternoon sun, terrified me so much. I still didn’t know what that incongruous object was really doing to everything I knew, but the fear was real and close.

I grew up in a country surrounded by a general state of suspicion, protected by militarism, sunken and crushed under an olive green boot. As I look at a group of officials standing in the sun, uncomfortable and a little restless, it occurs to me that I don’t remember a time when violence was not part of my life, when I didn’t live in fear of being attacked by those who seeking to seize or maintain power. And I think about that girl I was, who easily—and with worrying speed—got used to the tank in the street, the armed military on the every corner, the perception of repression as part of everything in everyday life. What provokes perennial, silent violence in a child? That persistent vision of aggression as part of your identity, of everything you are and aspire to be?

Not long ago, I told a friend that I have been scared for so long that I don’t know how to shake the feeling. Or rather, how to cope with that combination of bitterness, fatigue, and fear that continues unabated. It is everywhere, in every bit of daily life, in the useless attempts at maintaining sanity, calm. Or just hope. Fear is part of every notion I have about this country, the way I live, the way I want to live.

The group of military officers walk to the corner and disappear beneath the trees. But even though they are no longer visible, the entire street seems tainted and contaminated by this violence that throbs at the heart of everything. When I close the window my hands shake. And the fear is there yet again, because it can’t be any other way. Because Venezuela is reflected in all the little things that remind us of the fracture, the cracks, the pain.

When I look out into the hallway to throw out the trash, my little neighbor is there. He is playing on the stairs, jumping from side to side. He throws the ball, catches it, throws it again. The rhythmic sound is almost relaxing. It makes me think of innocent times, painful because they are incomprehensible to me right now.

His mother watches him from the stairs. I sit next to her. She sighs and looks at me with sad, tired eyes identical to her son’s.

“Sometimes I play movies, music, and TV shows for him at full volume so that he won’t be able to hear the tear gas bombs. I lock him in, the windows closed and the spaces blocked with cloth soaked in bicarbonate. But. . . that’s not enough. How can this be?”

The boy takes the ball and runs upstairs, faking a feint. I hear him narrate an imaginary game, laughing out loud. And I feel a strange, persistent, inexplicable pain. His mother shakes her head, squeezes her hands until her knuckles turn white. Her distress is so immediate and apparent that it becomes mine as well. I understand it with total clarity.

“We’re trying to leave the country, but we don’t have the money. We’re stuck here.” She sighs, her cheeks tight, her eyes dry. A suffering so slow it has deformed her countenance. “And it doesn’t hurt us, his father and I. We can manage all this mess. But him…”

The boy runs down again and throws me the ball. I hold it clumsily with my hands open. He waves his arms and encourages me to throw it again. “We’re going to lose the game”, he yells. “Throw it to me now!” When I do, he messes around, aiming a bit, and returns to his little and fragile world that comforts him. His mother tilts her head, rubs her eyes with the palm of her hand.

“We have to find ways to survive,” she murmurs. “But beyond that, how do you prevent all of this from fucking up your future?”

I think of this phrase as I lie on my bed, listening to the sounds of the street, attentive to the explosions in the distance, the sound of what could be stray bullets here and there.

Has violence destroyed my future? That slow, endless trickle in this country that causes such deep wounds? A pain so old that I cannot do anything but think that perhaps it is irreparable. The thought makes my body tense, it makes me feel pain. I gasp as my head sinks into the pillow. And suddenly, everything around me becomes uncertainty. Uncertainty in the midst of the tense silence of the night, and the echo of explosions that seem to get closer and louder with every passing night.