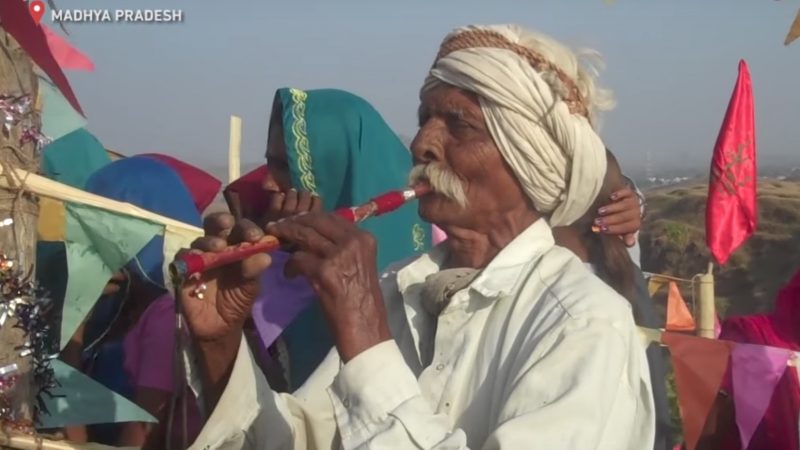 The festival of Rani Kajal Mata, Screenshot from YouTube.

This post was written by Sangeeta Rane and originally appeared on Video Volunteers, an award-winning international community media organization based in India. An edited version is published below as part of a content-sharing agreement.

Thousands of people have gathered in Verwada village in Barwani district to celebrate the newest festival in Madhya Pradesh – the festival of Rani Kajal Mata, an ancient, indigenous deity. The deity, a sacred rock, is the guardian goddess of the Pata tribe that resides in Barwani, the northernmost district of the Indian state of Madhya Pradesh, bordering Rajasthan.

It was the first time that such a festival, celebrating the goddess and the indigenous way of life, was organized by Jagrit Adivasi Dalit Sangathan, a nonprofit working for the welfare of the Adivasis or the tribals. To join in the celebrations, a crowd of over 5,000 indigenous people from around Barwani and it’s neighboring districts came together. Rani Kajal Mata is the protector of an ancient tribe in Madhya Pradesh. The community prays to her in times of trouble.

Why are the tribal residents of Barwani now summoning their protector? “We’ve lost our indigenous seeds. Our water and jungles are disappearing,” says Bilatibai from Verwada village of Barwani. Bilatibai and her community’s concerns are valid and supported by a study that places Barwani in districts that are “very highly vulnerable” to climate change, particularly with regards to the availability of water. Madhya Pradesh is home to 14.69 percent of India’s Adivasi or tribal population, which totals 104 million nationwide.

Barwani, primarily a tribal district, lies in the valley whence the river Narmada flows. Large swathes of the district’s settlements and forests have been submerged due to the Sardar Sarovar Dam — one of the highest dams in the world. For instance, this report claims that several tribal forest villages have been completely submerged under Narmada’s waters, displacing local communities and destroying the green cover of this largely arid area. The study also shows that dams along the river have caused water stagnation, making it saline and hampering the natural process through which fertile sediments would be deposited on the banks. The alkaline saline water is unsuitable for irrigation and has rendered fields barren. This has severely affected the tribal communities in the region whose primary occupation is agriculture.

Video Volunteers’ Community Correspondent Pawan Solanki, whose own tribal family has been displaced from their home at the banks of Narmada river, says:

Our culture worships nature and its elements as divine. Over the time, we’ve replaced these gods with others and have forgotten the importance of nature in our lives. But we depend on the environment for food, livelihood and shelter.

According to Pawan's report, the Adivasis consider Rani Kajal Mata to be their protector, praying to the Goddess to ward of trouble, and asking for answers to their problems.

In the festival and by invoking Goddess Rani Kajal Mata, the tribals elders of Barwani want to remind the younger generations about their dependency on nature and the need to protect it. It is also an attempt to revive the fight to regain jaal, jungle, zameen (water, forests, and lands).

Our ancestors could bring water to dry land by singing. A choki (ritual) could end a pandemic disease. These simple ways kept our communities happy.

The community's concerns about the environment have been prescient, as impoverished, vulnerable rural communities have had to bear the brunt of deteriorating environmental conditions and shortages of different vital natural resources.

The community elders are feeling the impact of environmental degradation through development projects draining their livelihood and eroding their identity. These communities are trapped in cycles of famine and debt. As a result, members of the younger generation are forced to migrate across the country, often working low-paying hazardous jobs. Migration itself has diluted individual tribal identities, alienating these people from their sustainable way of life.

“Due to migration, our brothers and sisters go to cities and lose pride in their individual identity. They assume that being tribal is inferior,” says Pawan. The festival celebrates this unique identity through arts and culture, and people tell stories that reflect the generational oral history, and say prayers invoking the ancient goddess.

The gathering also serves as a meeting point for the thousands of people from various villages across Barwani, who are fighting for their rights under the environmental and social movement Narmada Bachao Andolan (Save Narmada Movement). “The people come here for three days. They congregate and discuss new strategies, learn about new solutions from each other and learn about the overall progress,” says Pawan. While elders have been active in the movement, the youth’s interest in the movement has been fading. Pawan feels that this festival can become a starting point to get more young people to join the community’s fight to protect and preserve the environment and, hence, their own identity.