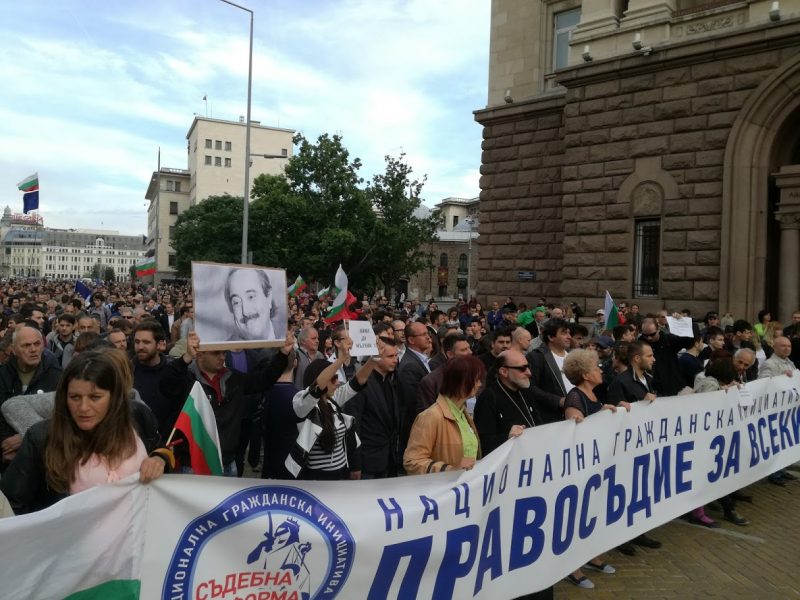 Protesters in Sofia, Bulgaria carrying the ‘Justice for All Initiative’ banner and photo of assassinated Italian anti-mafia prosecutor Giovanni Falcone on May 23, 2017. Photo by Konstantin Pavlov, used with permission.

Several protests were held across Bulgaria on May 23 and May 30 to push for reforms in the judiciary. Led by the ‘Justice for All Initiative’, the protests were part of a broader citizen movement calling for the implementation of the democratic standards set by the European Union (EU).

In Central and Eastern Europe, the term “European” does not only refer to geographical position, but it also signifies strong political connotations related to achieving the level of democratic and economic development of the original EU members. Formerly Communist Bulgaria had made great strides in this direction and became an EU member in 2007, although many believe it still needs to implement more political reforms.

On May 23, almost 2,000 people gathered in the center of Sofia, the capital of Bulgaria, demanding judicial reforms. They marched united by the slogans ‘March for European justice’ and ‘Protest to release the country from the Mafia’. The protest was supported by several civil society organizations, as well as prominent public intellectuals, lawyers and even some judges.

Protests were also held in the cities of Plovdiv and Varna.

The day of the demonstration was not chosen by accident. On that day, in 1992, the Italian prosecutor Giovanni Falcone, who dared to attack the Sicilian mafia was killed in a car bomb explosion. 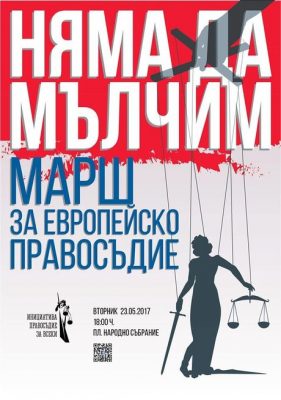 Poster for the May 23 demonstration organized by civil society. The slogans are shown at the top part of the poster: “We will not be silent!” and “March for European Justice”. Photo by Justice for All Initiative.

The development by the government of an updated national strategy for the fight against corruption was an important step, but the challenge remains to ensure its implementation, to adopt the necessary legal framework and to set up the envisaged institutions.

The appointment of Chairperson of the National Assembly Tsetska Tsacheva as Minister of Justice disappointed many people who believe she is incapable of implementing reforms because of her extreme loyalty to the ruling party.

During the 2016 presidential election campaign, Prime Minister Borisov promised to resign if his party's candidate, Tsetska Tsacheva, lost the election. On 6 November 2016 Tsacheva finished second in the first round to Bulgarian Socialist Party-backed Major General Rumen Radev, receiving only 22 percent of the popular vote compared to Radev's 25.4 percent. Borisov subsequently resigned his position.

Last March 2017, parliamentary elections were held in Bulgaria amid a political crisis which resulted in a coalition between Borisov's center-right party, Citizens for European Development of Bulgaria or GERB, and the nationalist bloc, the Patriotic Front. Borisov became the prime minister again because of the coalition. But this provoked a scandal as photos of some members of the Patriotic Front doing Nazi salutes had been widely circulated in the past.

On May 30, the ‘Justice for All Initiative’ returned to the streets by organizing a ‘drinking coffee’ protest in front of the president's office while leaders of political parties and top state officials were entering the building for the meeting of the Consultative Council on National Security. They urged President Radev, who is regarded by many as the symbol of unity in the country, to support their demands for judicial reforms.

Tweet: “Justice for All” Demands that the president take initiative for judicial reform.
Photo: Prime Minister Borisov waving to citizens while entering the president's office.

The protests were ignored by various mainstream media outlets. One online news website even accused the protesters of being unpatriotic because a participant was seen holding a placard with a misspelled Bulgaria, and blamed them for “abuse of their children” claiming that the May 30 protest undermined the Children's Day, which in Bulgaria is actually observed on June 1.