In a Much-Criticized Display of Wealth, the Angolan President's Son Spent Half a Million Euros at a Charity Auction 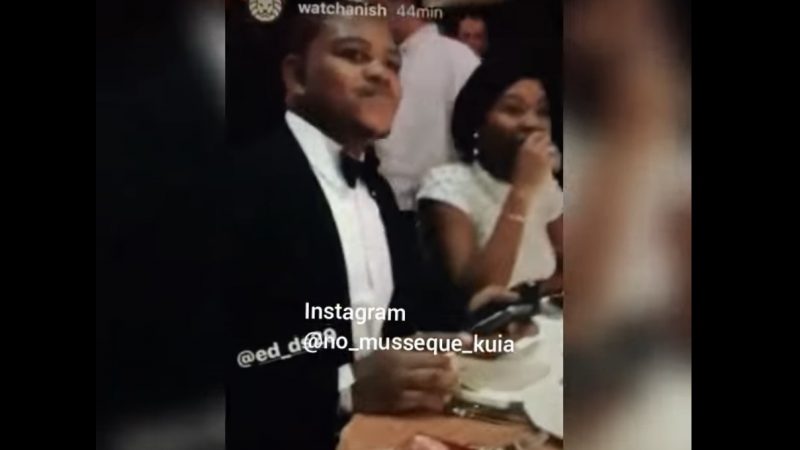 A video circulating on social media showing one of the Angolan president’s youngest sons spending 500,000 euros (about US $560,000) at an auction in France has sparked criticism in Angola.

The video captured the moment when Danilo bought an item — at first speculated to be a watch, but then later confirmed to be a set of photographs — for half a million euros at an auction organized by amfAR, an organization combating AIDS, held on 25 May in Cannes. amfAR holds the auction annually and it is known for being attended by Hollywood celebrities.

In the recording, American actor Will Smith, who seems to be acting as auctioneer, remarked, while complimenting Danilo and his companion on the stage: “They look way too young to have 500,000 euros”.

The vídeo was shared originally on Instagram stories by the luxury watch blogger Anish Bhatt, whose account boasts 1.7 million followers. Before disappearing from the site, the video was recorded and published on YouTube and soon went viral, provoking a lot of indignation among Angolans.

The luxurious lifestyle of the Dos Santos family is frequently an object of scrutiny for the international press – and of anger on Angolan social media. The second biggest oil producer in Africa, Angola remains among the world’s 40 countries with the worst human development indices. A third of the population lives on less than 2 dollars per day.

Meanwhile, the fortune of José Eduardo dos Santos has been estimated at US $20 billion, which would put him among the world’s 50 richest people.

There are rumours about the current state of his health – JES, as he is nicknamed, recently spent 28 days in Spain for medical treatment and everything indicates he will leave the presidency in August 2017. For the first time since 1992, when general elections were established in Angola, his name will not be on the list of candidates of his party, MPLA – this time, the list is headed by current Defence Minister João Lourenço, his probable successor.

But José Eduardo dos Santos has not spared any effort in ensuring that his legacy continues through his family. The most famous of his children is businesswoman Isabel Dos Santos, 44, the only female billionaire in Africa. As well as being president of the Administrative Council of the state oil company Sonangol, she has investments in various multinationals, from banks to telecommunications, totalling a fortune of US $3 billion, according to Forbes magazine.

For his part, Eduane Danilo dos Santos oversaw the privatization of Angola Telecom, apparently his only job so far.

After receiving criticism on social media for his auction purchase, Danilo, as he is known, decided to write on his personal Facebook page. He said that the story was nothing more than a misunderstanding and that the 500,000 euros were related to the purchase of art works for his foundation “Child’s Spirit’ — an entity that turns up no traces online, except for his own mention at the auction.

The message, which he subsequently removed, but was copied by other sites, read:

[…] I would like to inform you that I participated in a charity auction, not to acquire a watch, but a collection of paintings by George Hurrell, representing my association “Child’s Spirit”.
I have a strong conviction that I must be involved in this cause, and believe that there is a cure for HIV/AIDS, and we must continue to search for this treatment. The monetary value of this donation of €500,000 will show itself as continuing to move us in a united way, to combat this evil that affects society in Angola, and the world in general, in a difficult way nowadays.

Health, culture and education are important things that I defend, and this collection of paintings by George Hurrell will be a part of the “Child’s Spirit” Association. […]

My friend Eduane Dos Santos did not buy ‘ANY’ watch at Amfar – American Foundation for AIDS Research. Amfar is a not-for-profit organization which has contributed a lot to research on AIDS and HIV, its treatment and education. […]

We made the purchase ‘together’ of the pieces of art as a donation of 500,000 and intend to offer these pieces of art (10 in total), for use as part of exhibitions in museums in Angola (4 in total) and the others (6) for an event at the beginning of July to raise funds.

Angolan internet users, however, did not buy the story. The criticism kept coming: for example, this post by Maka Angola, a website critical of the regime:

And in the comments on the above post, Elsa Beatriz, a resident of Angola’s capital, wrote:

The question for us, Danilo, is not what you bought, but what money you used, if it was yours you will have to settle the accounts with the courts, showing how and why you earned this money, given that you are only 23 years old [sic], being the son of who you are, we suspect that this money came out of the state coffers, that is to say it is our money, so we ask that you prove to us the contrary.

D.R. of Congo  6 days ago
END_OF_DOCUMENT_TOKEN_TO_BE_REPLACED