A Ugandan Woman Thought She Was Going to Teach in Kuwait. Instead She Was Trafficked. 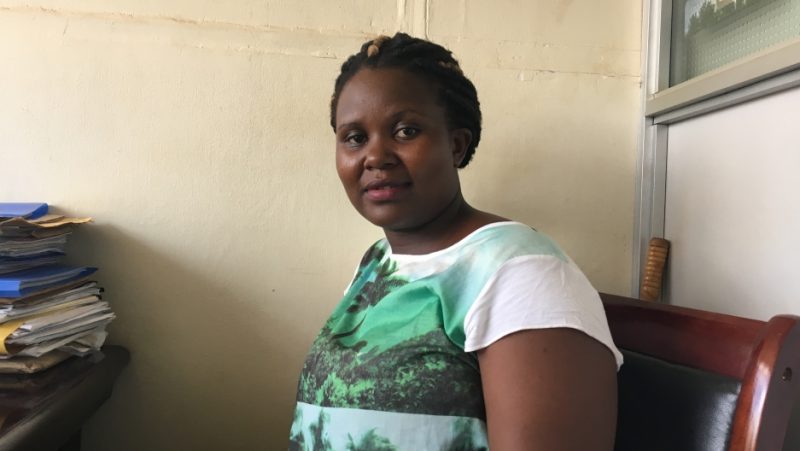 Ugandan teacher Prudence Nandaula was duped into taking a job in Kuwait. She thought she was going there to be a teacher but instead she was a domestic servant to a family. Credit: Jasmine Garsd

This story by Jasmine Garsd and Andrea Crossan originally appeared on PRI.org on May 25, 2017. It is republished here as part of a partnership between PRI and Global Voices.

The world is importing labor more than ever before. According to the UN, more than 244 million people globally have left their home countries in search of opportunities.

For women, that often means jobs in child care and the service industry. But what they sign up for is often not what they get.

In this video, an anguished Ugandan girl in a blue headscarf asks that her parents be contacted. She says she’s sick and not allowed to come back home.

No one knows where the video was shot — it’s believed to be from inside an Arab country.

But it sparked outrage in Uganda. Though no one should have been surprised. When you think of slavery, you might think about the historical trade from Africa to the Americas. But the business of slaves being sent to the Middle East is ancient, too. And right now, business is booming.

Uganda has one of the youngest populations in the world. Nearly 80 percent of the country is under 30. Most are unemployed.

Prudence Nandaula had a job — as a teacher in Masaka, a town in central Uganda. She made about $160 a month — which is good by Ugandan standards. Enough to pay rent, send her son to school, and Prudence even had a maid.

Still, when she was offered a job teaching in Kuwait, making twice as much, she was thrilled.

“I was so excited. I thought when I go there, maybe get the money,” says Nandaula. “I’ll be able to support my boy.”

She’d been told by a friend of her brother's that it was a great opportunity.

“You are told they will give you food and shelter. Save, and come back and do something important.”

“Most of the girls recruited in Uganda are recruited by their friends and relatives,” says Mayambala Wafrika, chair of the Justice for African Workers campaign.

Wafrika says this is usually how it goes: A friend of an extended family member or maybe a buddy of an acquaintance hits you up on social media.

When Nandaula arrived in Kuwait, things unraveled pretty quickly. The family she was staying with took her passport and told her to start cleaning. Nandaula says at that moment it dawned on her: She’d gone from being a teacher to a servant in a foreign country. Against her will.

“And I was like, ‘Oh my goodness. I used to have a housemaid back home. And now I’m working in someone’s house.'”

Still, she stuck it out for a few months. But the family was verbally abusive. Nandaula says she watched other women who worked there be physically abused. She told her employers she wanted to leave.

“And they're like, ‘No, you’re not supposed to go, you are supposed to finish the contract.’ They’re talking about a contract [I] have not even signed.”

Typically, a Kuwaiti family pays a recruitment agency as much as $4,000 for a maid, on a two-year contract. A local recruiter in Uganda can make as much as $500 per girl. Everyone got paid — except for Nandaula.

She actually made less than what she made back home. And she was stuck. Even though there are an estimated 100,000 Ugandans working in the Middle East, there’s only one embassy — in Saudi Arabia. There isn’t even a consulate in Kuwait for Ugandans to get help.

“They get these girls and treat them in the same gruesome way as they would a slave,” says Wafrika.

He says the recruitment agencies judge the girls the same way slave traders would have — over a century ago.

“Someone comes, looks at you, checks your height, your weight, your skin color … decides whether you are worth the amount of money he’s going to be paying for you.”

But they are recruited because, unlike women in other sub-Saharan countries, most Ugandans speak English.

Nandaula's luck changed one day, when the family she worked with invited some friends for dinner. Those friends brought their own maid, also a Ugandan woman. Nandaula says maids are discouraged from talking to each other. But they chatted anyway, and Nandaula told this woman about the abuse.

The woman encouraged her to get out.

And she did. One morning, while the family slept, Nandaula quietly left the house.

But her odyssey was far from over. As soon as she walked out that door, her employment visa was canceled. Nandaula turned herself into the police. She spent three weeks in jail, waiting to get deported. She was lucky — some girls spend months there. An acquaintance managed to get her passport back from her furious boss. That's not usually how it goes.

The Ugandan embassy in Saudi Arabia often has to intervene.

Nandaula was able to come back to Uganda. She’s teaching again. She makes a decent living. But the economy in Uganda took a dip in the last year. Everyone’s pocket is a little tighter. She says she might try her luck in the Middle East again. But this time, she’d be so much more cautious.

“I can’t say I wouldn’t go back. If they change the system that is there, I’ll be free to go back.”

Civil rights activist Wafrika wants to see some changes, too — starting with a ban on domestic workers from Uganda in the Middle East. Uganda, he says, has enough educated professionals it can export instead. And he wants to see girls like Prudence educated about the dangers of taking work overseas. But if they do decide to go — there should be government offices in every country.

The government’s response last year to the outcry over women being abused by their employers was to ban Ugandans from traveling to Saudi Arabia to be maids.

Wafrika says the government should also have an emergency fund that Ugandans can access when they’re in trouble working abroad.

It’s a tall order for a country as poor as this. But Wafrika says if the Ugandan government doesn’t protect its girls, who will?