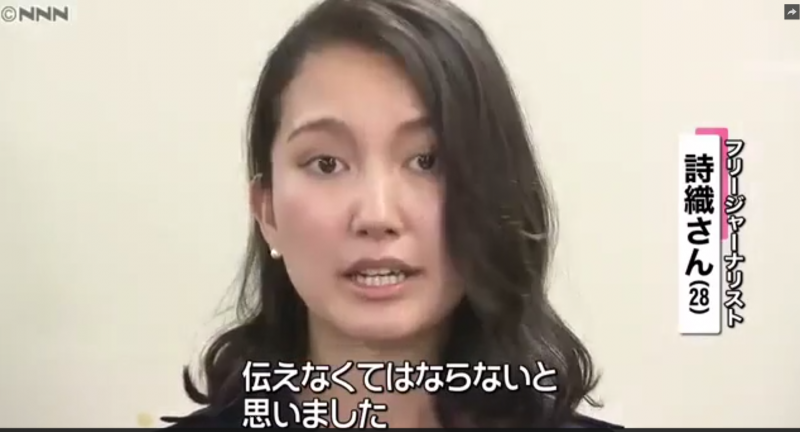 Captions: Shiori (28), freelance journalist; “I knew I had to say something.” Screencap from YouTube.

In late May 2017, the hashtag #FightTogetherWithShiori started to trend on Japanese Twitter. The hashtag was created in support of a woman, known simply as “Shiori”, who appeared on television to allege she was sexually assaulted by a well-known journalist in 2015.

Following a May 29 deposition at Tokyo District Court, “Shiori” held a press conference in which she accused high-profile journalist Yamaguchi Noriyuki of drugging and then sexually assaulting her in a hotel room in 2015. Yamaguchi Noriyuki is the former Washington bureau chief of Japan's TBS network. He has close ties to and has written several books about Prime Minister Abe Shinzo.

In Japan, as in other countries, many sexual assaults go unreported. In an emotional presentation to reporters, Shiori said she took the unusual step of going before the media to describe what happened, explaining, “I knew I had to say something.”

Here in Japan, rape victims are always blamed, humiliated by everyone & give up suing. Crazy society! #Fighttogetherwithshiori

Shiori took to the airwaves after the weekly news magazine Shukan Shincho — and other news organizations — reported that investigators had dropped the case because of instructions from higher-ranking police officials, allegedly because of political pressure from the prime minister's office.

Another tabloid, Nikkan Gendai, reported that earlier in May 2017, Yamaguchi had mistakenly sent an email asking for help to Shukan Shincho rather than to Kitamura Shigeru, an official in the prime minister's office, for whom the correspondence was intended. Shukan Shincho also received and published detailed email correspondence between Yamaguchi and Shiori that corroborates parts of her story.

Even before Shiori appeared on television, the allegations reported earlier in the month by Shukan Shincho generated a firestorm of debate. In a tweet shared thousands of times, one Twitter user noted:

Reported by Shukan Shincho: the Yamaguchi Noriyuki ‘quasi-rape’ (i.e., ‘drug-facilitated sexual assault‘). The idea that, despite third-person testimony and surveillance footage, as well as an email of apology sent to his female victim, police leadership cut short the investigation is scary. It's been confirmed that head of the (Tokyo Metropolitan Police) bureau of investigations said he ‘authorized the investigation be suspended’. It's exceptional that the head of investigations would insert himself into the story like this. Like he was suppressing the results of the investigation.

Under Japanese law, Yamaguchi could be investigated for committing “quasi-rape” (jun kyokan, 準強姦), which the Asia Japan Women's Resource Center explains is a criminal charge “applied when a person commits rape or other types of sexual assaults by making a victim incapable of resistance — for example, by using drugs or alcohol to make the victim unconscious.”

The fact that Shiori had to resort to appearing on camera in the hope of receiving justice led some to observe that she was being victimized a second time. Using the hashtag #FightTogetherWithShiori and quoting a Buzzfeed Japan article which provided key details about the assault, one commenter noted:

Even before Yamaguchi had actually been arrested, ‘under orders from above’ the case was closed with no indictment. Why did the victim have to take it this far and show her face? This is why the term ‘second rape’ has become so common. Unforgivable.

That tweet was also shared more than a thousand times.

There is the perception that the Japanese establishment is circling the wagons to protect the former TBS journalist and supporter of the prime minister. Quite apart from Yamaguchi's 2015 email asking the cabinet office for help, this impression is being fueled by other missteps. After the Shukan Shincho article was published, Yamaguchi took to social media in early May to explain his side of the story — and Abe Akie, the prime minister's wife, “liked” the post:

The sarcastic jab about being “ally of women” is a reference to a series of speeches Abe akie has made, calling women “the future of Japan“. After being called out for “liking” Yamaguchi's post, Abe Akie remarked, “Who thought that simply liking a Facebook post would generate so much persecution!”

For now, Shiori hopes her case will be reopened. Her May 29 deposition was to an inquest committee, which, after deliberations, will vote on whether or not to recommend that prosecutors indict Yamaguchi.

In the meantime, Shiori's television appearance has sparked debate on social media in Japan — and around the world — about justice for victims of sexual assault:

No means no! And ONLY yes means yes!!ノーはノーだし、主体的・具体的・積極的イエスだけがイエスなのよ。それ以外はノーです。

No means no! And ONLY yes means yes!!

Independently, tangibly, actively: only yes means yes. Anything else means ‘no’.

The conversation can be followed online in English and Japanese at the hashtag #FightTogetherWithShiori.