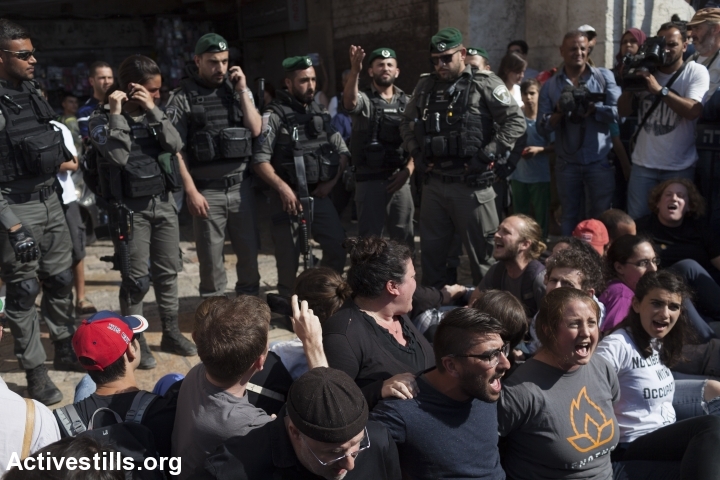 Police evacuate Israeli and diaspora Jew activists, as they block Damascus Gate in Jerusalem's old city, to protest against the “flag march,” which celebrates the 50th anniversary of East Jerusalem's “liberation” by Israel. May 24, 2017. Source: ActiveStills. [1]

For many Palestinians, the Israeli national holiday of Jerusalem Day, or Yom Yerushalayim (יום ירושלים) in Hebrew, is a bitter reminder of Israel’s systemic impunity.

Following the capture of East Jerusalem by the Israeli Defence Forces during the 1967 Six Day War, Palestinians residing in East Jerusalem were given permanent residency status rather than citizenship [2].

Since then, they've been denied equal access to municipal services and live under the threat of the Israeli authorities. As the Israeli human rights NGO B'Tselem says [2], Palestinians in East Jerusalem are systematically mistreated:

[They're treated] as immigrants who live in their homes at the beneficence of the authorities and not by right… although these Palestinians were born in Jerusalem, lived in the city, and have no other home.

No country in the world ever recognized Israel’s effective annexation of Jerusalem, which the UN Security Council condemned in 1980 with Resolution 478 [3], with the United States abstaining.

Nevertheless, the State of Israel annually celebrates what it considers the “liberation” or “reunification” of West and East Jerusalem, focusing on the seizure of the Western Wall and Temple Mount/Haram al-Sharif.

One of the most notorious spectacles of the day is the March of the Flags, when roughly 50,000 Israeli ultra-nationalists parade through Jerusalem and Damascus Gate to the Muslim Quarter of the Old City.

Largely funded [4] by the Jerusalem Municipality, this parade is not simply an exhibition of domination over the city; it is an incitement to harassment and assault.

Holding signs of acclamation for the supremacist and convicted terrorist [5] Meir Kahane, as well as his manifesto titled They Must Go [5], the crowds draped in flags beat drums to the cadence of their chants, calling for “death to Arabs, the Muslim prophet Mohammed [5] and leftists [6].”

The Israeli police protect the crowds while restricting Palestinian movement, typically [5]blocking entrances to their neighbourhoods, and spraying “skunk water” malodorant on anyone attempting to exit.

Moreover, the police seal entry to the Muslim Quarter and order Palestinian traders along the route of the march to close shop.

Palestinian activist Suleiman Maswadeh summarized the dread this evokes in an article titled The One Day Jerusalem's Palestinians Fear the Most [7]:

Right-wing extremists provoke us by aggressively banging on our doors… And if anyone dare think of responding, we all know who the police will believe.

Jerusalem Day 2017 marked the 50th anniversary of the start of the Israeli Occupation. According to journalist David Sheen, this year’s march was particularly intense:

Jerusalem Day march today was more racist than ever. Marchers sang “Zachreni Na”, with its lyrics to wipe out Palestinians, dozens of times.

Members of the Jewish community worldwide have responded to the controversy and hostility surrounding the anniversary, reflecting the widening division into different camps.

In the United Kingdom, more than 70 Jews signed a letter to Rabbi Lord Jonathan Sacks [9] denouncing his participation in a delegation that joined the March of the Flags.

In West Jerusalem, about 50 Jewish owners of shops, bars, and restaurants defended East Jerusalem Palestinians with various acts of solidarity, such as closing their shops before the parade began.

Illuminating the disparity in treatment, one of the Jewish restaurant owners explained to +972 magazine [10]:

I don’t envisage a situation in which the police coerce a business owner in West Jerusalem in the same way, taking the side of the rioters instead of protecting the city’s residents.

As many as 60 local and international Jewish activists also staged a sit-in at Damascus Gate, as part of a coalition of the anti-Occupation groups “IfNotNow,” “All That’s Left,” and “Free Jerusalem.”

Leanne Gale, a 25-year-old Jewish activist living in Washington, DC, and the spokesperson for IfNotNow, explained the sit-in to Global Voices:

This is not an occasion to celebrate. Jews around the world must resist this violence, supposedly perpetrated in our names. As Israeli anti-occupation activists have been saying for a long time, there is no holiness in an occupied city.

Protesters said they hoped to stop the crowds [4] and compel them to take alternate routes, while disrupting the police's plans to clear Palestinians from the Muslim Quarter.

Approximately twenty-five demonstrators came into direct contact with the police. This was after about two dozen interlinked their arms, singing songs in Hebrew and chanting slogans like “Now, now is the time; Jews must stand with Palestine [11].” It was then when right-wing Israeli activists charged at them [4].

Activist Rachel Roberts described in a blog post what she saw [6]:

I thought about my great-grandparents, who learned a Judaism before there was Zionism, and how there was no one to protect them when thugs would parade through their Eastern European villages to harass and do violence in the name of religion and nationalism.

Gale told Global Voices that Israeli police ordered demonstrators to disperse, intervening with force. “Some of us were choked. Some were dragged by the neck under police batons, and some were thrown to the ground,” she said.

Held in a headlock by the police, one participant was filmed repeating the phrase, “I can’t breathe.” [4] American-Jewish activist Sarah Brammer-Shlay sustained the worst injuries in the group, breaking her arm [12] when an officer grabbed her. Palestinian medics quickly evacuated [4] her to the Hadassah Medical Center in Jerusalem, free of charge.

Cops broke the arm of a Jewish American woman at an anti-occupation demo in Jerusalem. Now she needs a $25K op. https://t.co/yQlV9QrEQf [13]

Activists say these efforts are an encouraging sign for the future. Speaking to +972 magazine, IfNotNow organizer Yonah Lieberman said “never before has such a coalition assembled to put together this kind of action on Jerusalem Day [4].”

IfNotNow's Rachel Roberts said in a blog post [6] that activists should focus on standing up to this nationalism:

The most important thing that we can contribute to their struggle is to declare that the faulty, parochial worldview that informs the nationalism of the right is not our Judaism.

It's probably time to put this Zionism thing to rest now. We won't miss it. pic.twitter.com/gLToa7YD84 [15]

Whatever optimism the recent demonstration in Jerusalem occasions, it's important to note that it was an episode in a much larger nonviolent campaign by Palestinians to reclaim their dignity.

In an opinion piece [17] for the Israeli newspaper +972, Brammer-Shlay wrote, “We hoped to symbolize to our community back home the ways that Israel uses violence against Palestinians in order to protect the interests of occupation and right-wing violence.”