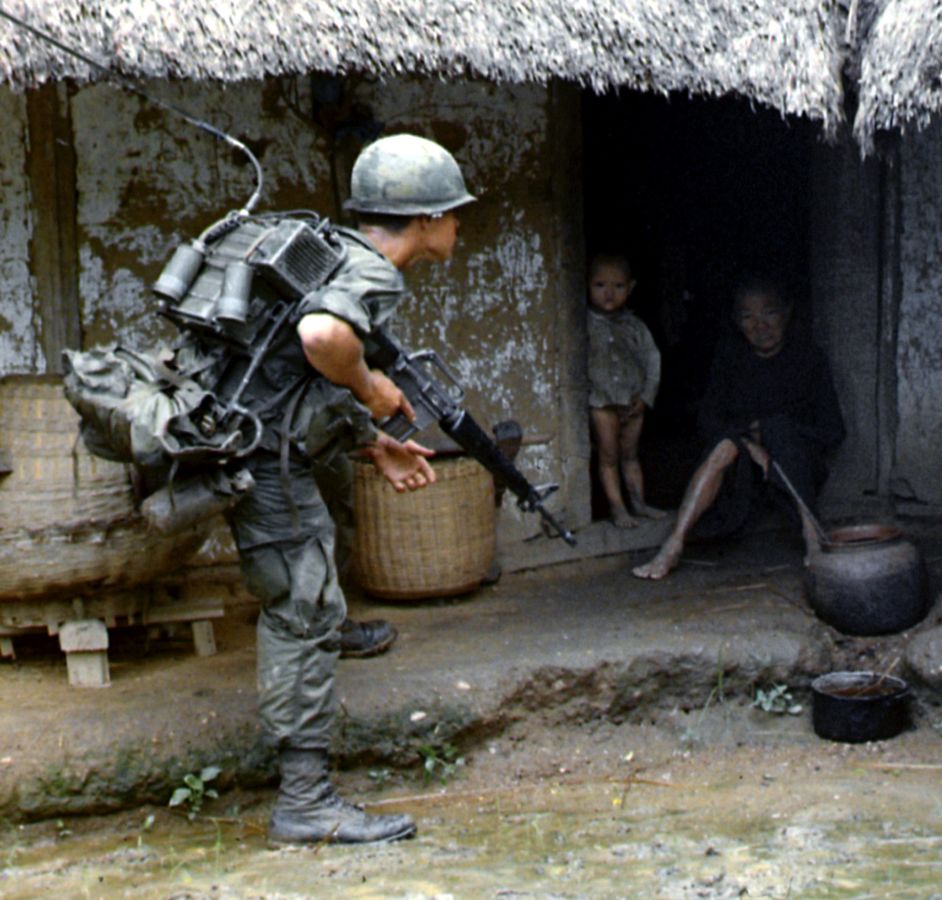 This photo of a US soldier in a Vietnamese village in 1966 was recently used by a Philippine government news website to report about the status of martial law in Mindanao. Photo from Wikipedia. Public Domain.

The southern Philippine island of Mindanao — the second biggest island in the Philippines — was placed under martial law on May 23, 2017, after a local group suspected of having ties to ISIS attacked various parts of Marawi City. While many supported the government's decision to pursue the militants who attacked the city, there were also critics who think that declaring martial law across the entire island is unnecessary.

Concerns about martial law are related to the country’s bitter experience during the Marcos dictatorship in the 1970s, when martial law led to rampant human rights violations and the restriction of the people’s civil liberties.

Perhaps in order to gather public support for martial law, some officials and supporters of the government started sharing photographs from other countries, trying to pass them off as depictions of the situation in Mindanao. Internet users have been busy debunking the images. 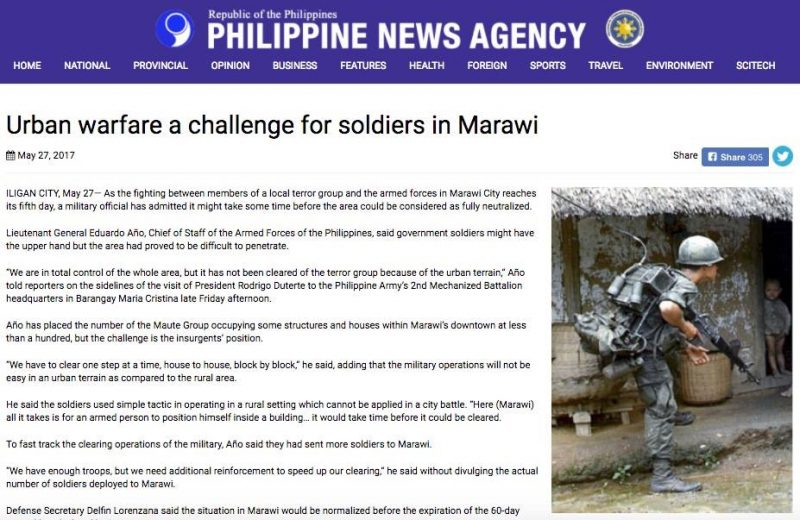 Screenshot of an article posted in a Philippine government news website. The photo of the article is taken from a Wikipedia entry discussing the Vietnam War. Source: Facebook page of Tonyo Cruz

The image above shows the website of the Philippines News Agency (PNA), a government news service, which published an article explaining the difficulties encountered by the army in conducting urban warfare in Marawi. The article’s photo, however, comes from the Wikipedia article on the Vietnam War, which PNA conveniently failed to mention.

After receiving a lot of flak for publishing the photo, the PNA acknowledged its mistake and assured the public that it did not intend to spread misinformation:

While there have been lapses in our judgment, it has never been the policy of PNA to tolerate erroneous report, and it has certainly never been our intention to sow misinformation, much less share what is termed nowadays as “fake news.”

We regret that these mistakes have cast doubt on our integrity as a news agency.

On May 28, 2017, Assistant Secretary of the Presidential Communications Operations Office Mocha Uson shared a photo on her popular Facebook page about a group of praying soldiers. Perhaps her aim was to pay tribute to soldiers who are fighting terrorists, but the soldiers in the photo she shared are actually members of the Honduran police force.

.@MochaUson Tell your followers AND yourself that we have enough photos of our soldiers praying. No need to use Honduras police's. SHAME! pic.twitter.com/b83CJtm7Z8

After being criticized for posting the photo, Ms. Uson claimed that it was merely a symbolism and that she didn’t name the Honduran police as Filipino soldiers. She accused her critics of “lacking common sense.”

Meanwhile, supporters of the president actively shared a Facebook album containing photos of smiling citizens taking selfies with soldiers and tanks to prove that martial law is accepted by Mindanao residents. But the photos are actually from Thailand, recorded when the army grabbed power in 2014.

Global Voices has published several stories about how “coup selfies” informed the world that a junta had taken over Thailand and that some citizens were using selfies to express protest against the military dictatorship. But in the Philippines, these photos were used by the president’s avid supporters to justify martial law in Mindanao.

At the time of this writing, the album containing the Thai coup selfies has more than 33,000 shares..

Facebook user Diwata Luna said this misattribution amounts to an injustice against the real authors of these images:

It hasn't all been accusations and acrimony, however. The misuse of famous photos has also encouraged no small amount of humor, such as one journalist's take on PNA's “lapse in judgment.” Some context for the text below: Maute is the group with suspected links to ISIS, and the image is about the clash between Spanish colonists and natives in 1521.