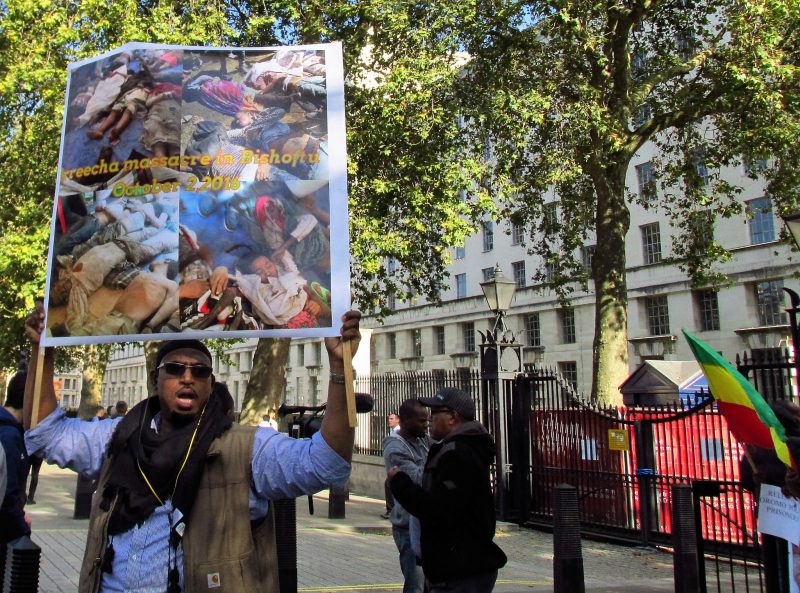 An October 2016 protest in London by Oromo people over killings and human rights abuses at the hands of the Ethiopia government. Photo by Flickr user David Holt. CC BY 2.0

On May 30 at 3pm local time, Ethiopians found themselves unable to access the Internet. The blackout appears to be country-wide.

It appears that Ethiopian authorities imposed the nationwide Internet blackout in order to prevent “leaking of exam questions on Facebook” ahead of secondary school exams set to be administered over the next two weeks.

24 hours after the total Internet blackout, Ethiopia still refuses to say why it shut down. Via @AFP pic.twitter.com/ZzJcX6Vqe8

Finally, the Ethiopian government announced that the internet blackout will continue until June 8, 2017, reasoned by fear of ‘exam leaking’.

Last year, the government was forced to postpone the national university entrance exam after the initial session was marred by a leak spread on Facebook. Activists in the diaspora leaked questions on Facebook ahead of the exam in early June in 2016 after the government refused to re-schedule the exam for students who missed an entire semester of classes due to protests.

But the current blackout is different from previous mobile Internet and social media shutdowns that have been imposed in an effort to prevent exam leaking. This blackout is broader in scope and scale, effectively eliminating Ethiopia from the map of the global Internet.

This is especially easy for the Ethiopian government to do, since all Internet and phone service in the country is provided through through a single government-owned Internet service provider, Ethio Telecom. The blackout thus leaves businesses, banks, Internet cafes in Addis Ababa and social media pages of government media cut off from the rest of the world, making it harder for them to do their day-to-day work.

The gravity of this move begs the question: Are authorities really just trying to prevent students from cheating on exams, or is there more to it? Indeed, this is just one among various reasons that Ethiopian authorities have used to justify censorship and shutdowns in recent years.

When Ethiopian authorities declared a state of emergency in October 2016 they officially blocked access to Facebook, Twitter and popular messaging apps such as Viber and IMO.  Since Internet speeds are already incredibly slow, data-heavy video platforms such as YouTube have been rendered inaccessible even though they are not officially blocked.

Just two weeks ago, activists inside the country reported that they were finally able to access Facebook freely, after many months of using VPNs and other circumvention tools to login to the social network. But with the country now in total blackout, they are now even more isolated from the rest of the world, and even from each other, than before.