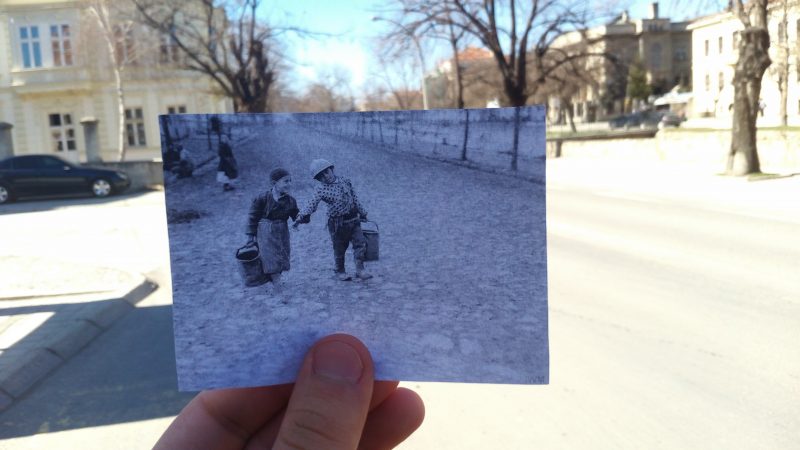 Photo of two children from 1917 Bitola and the same street along river Dragor in 2017. One of them is wearing a French army helmet. Used with permission.

A group of high school students from the southern Macedonian town of Bitola is using photo collages to revive local memories of the First World War.

A hundred years ago, Macedonia was part of the so-called Macedonian Front, also known as Salonica Front (after Thessaloniki) or Eastern Front in French (Front d'Orient), which is roughly along the current border with Greece. From March to October 1917, the Allied-held city of Bitola was devastated by 13 major artillery bombardments by the Central Powers, which included the use of poison gas.

Fast forward to 2017, high school students who participated in a project enabling kids from several cities to learn more about the period prepared an exhibition of photographs of Bitola then and now. They juxtaposed the photos of their city taken in 1917 or 1918 with the actual sites today.

The resulting photographs show how Bitola has changed in 100 years. They drew much social media attention after some of them were published on Bored Panda.

Besides photographs, another type of “memento” from this historic period are unexploded ordnance – grenades, cannon shells and bombs which still litter the area. Residents continue to unearth such dangerous artifacts at least once a year. 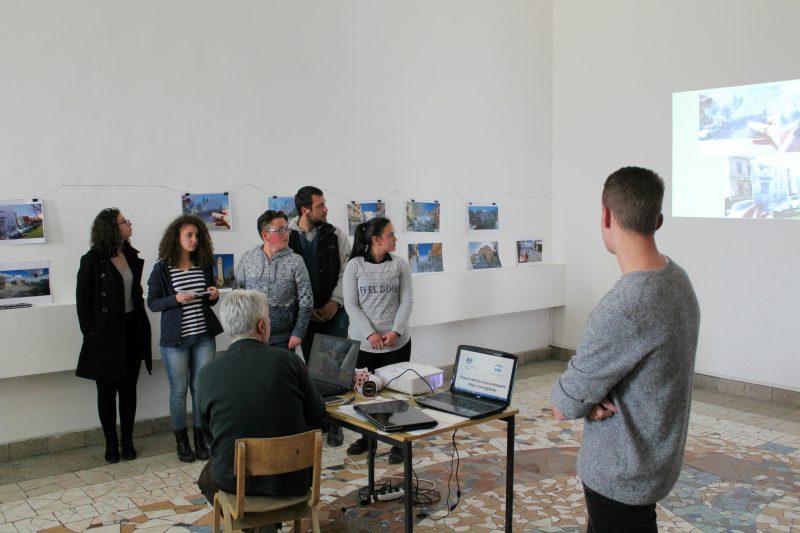 The overall project included diverse student groups from Skopje, Tetovo, Strumica and Bogdanci, who together with their peers in Bitola participated in workshops based on peace-building methodology and explored the old battlegrounds through field visits. Each group then chose different methods to show what they've learned, making a short video, interactive map, and a diary of a soldier.

Teaching young people about the horrors experienced by ordinary people in previous wars enables them to become active agents in preventing new conflicts. This is especially important at a time when nationalists continue to open the old wounds from recent Balkan wars, including those from the 2001 armed conflict in Macedonia, to mobilize political support. 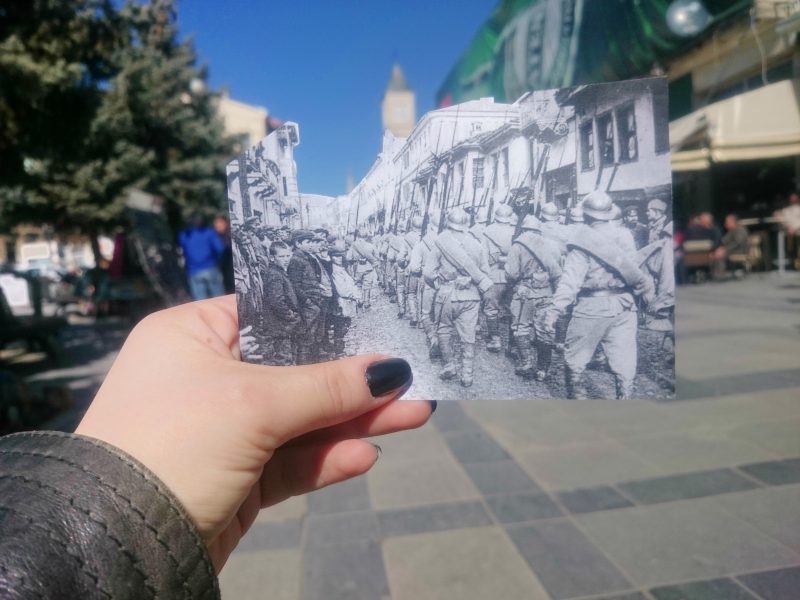 Global Voices received permission to republish the photographs thanks to the Association of Local Democracy Agencies (ALDA) – Skopje, which implemented the project with the aid of the British Embassy in Skopje. The participants of the project include Professor Iljo Trajkovski and students Viktorija Vodilovska, Eva Kraus, Vesna Trajchevska, Marijan Kotevski, Blagoj Janakievski, and Gorazd Dimovski. 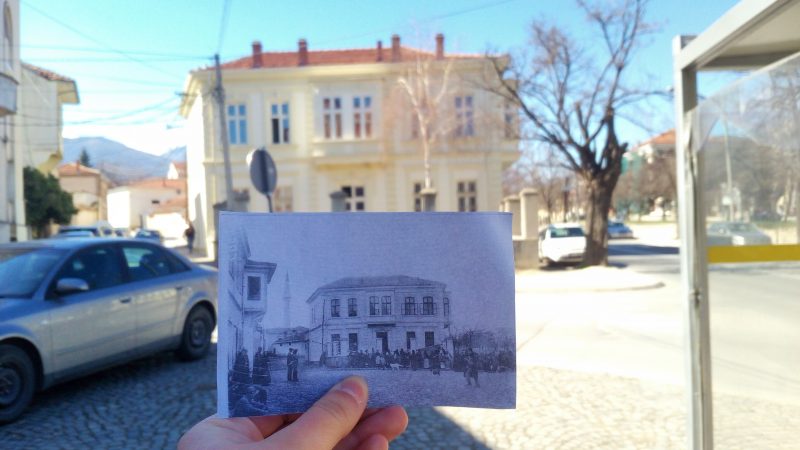 Citizens of Bitola are proud of preserving some of the old buildings, built during the time when their city was a provincial capital of the Ottoman Empire and seat of foreign consuls. The pictured building serves as Primary Music School. Used with permission. 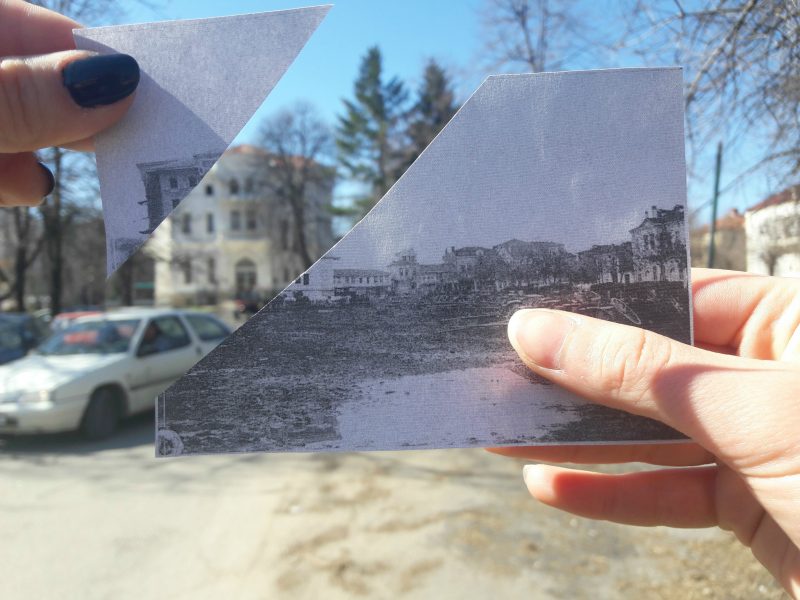 Then and now. How the Army Club, built in 1911, looked in 1917 and today, through two photos. Used with permission. 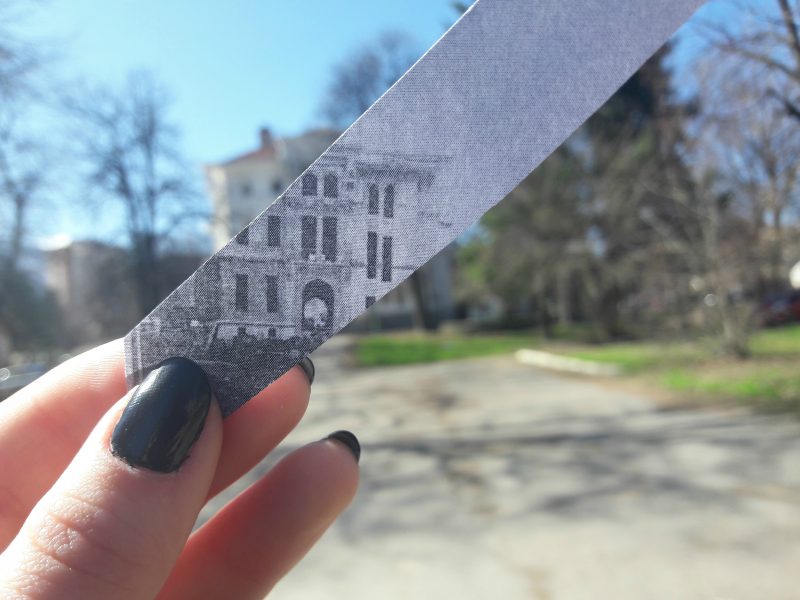 The companion piece of the above photo, showing the other side of the street. Used with permission. 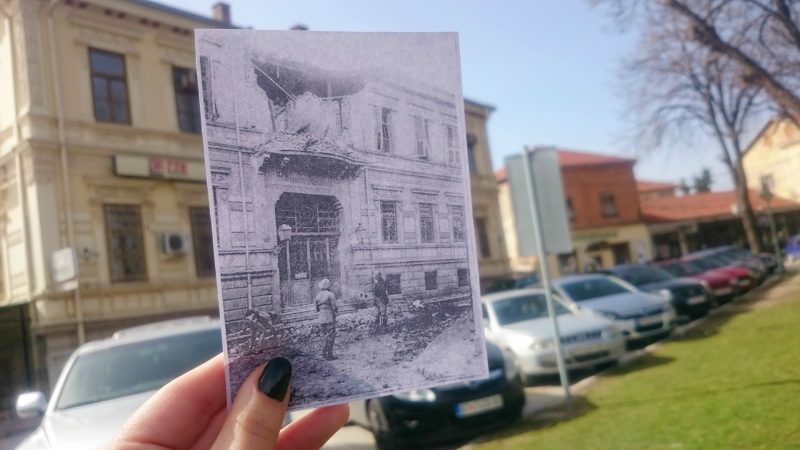 Some of the damaged buildings during the 1917 bombardments had been repaired and are still standing today. Used with permission. 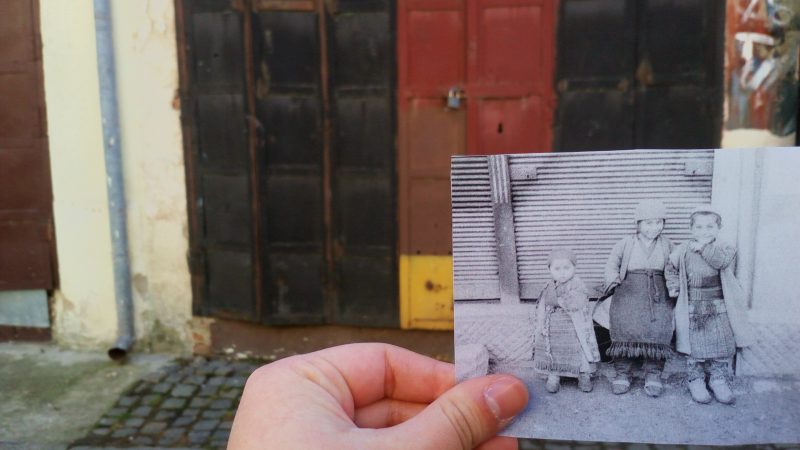 A scene from the Bitola Old Bazaar. Used with permission. 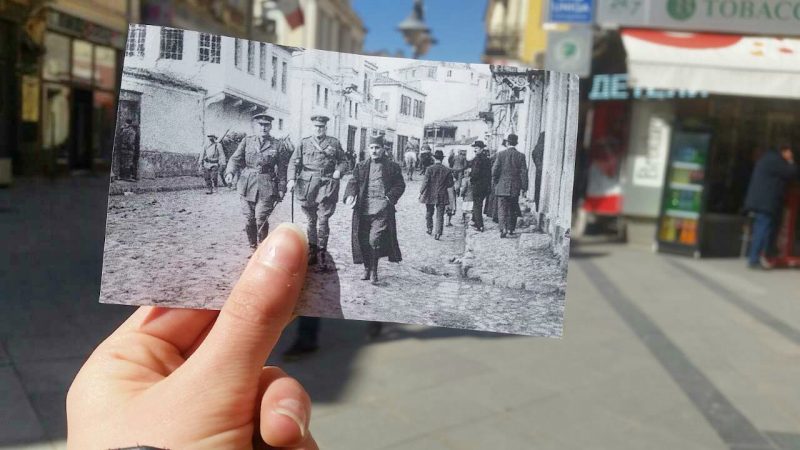 Officers in British and Serbian uniforms walking on Shirok Sokak, the main shopping street in Bitola. Used with permission. 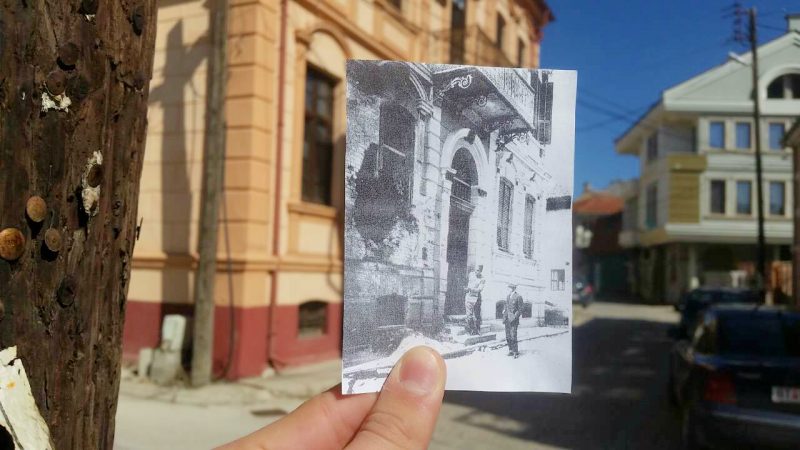 A preserved house in Bitola. Used with permission. 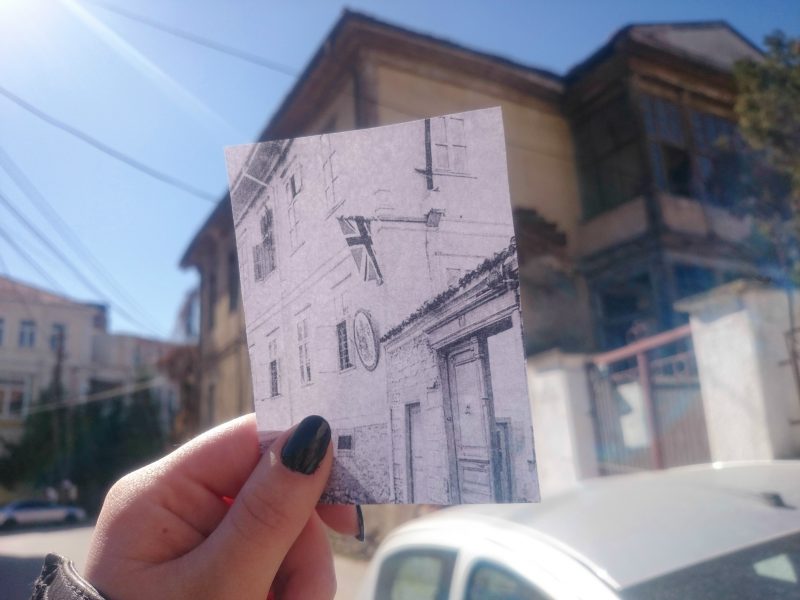 A house which brandished an UK flag a hundred years ago, possibly used by the army. Used with permission. 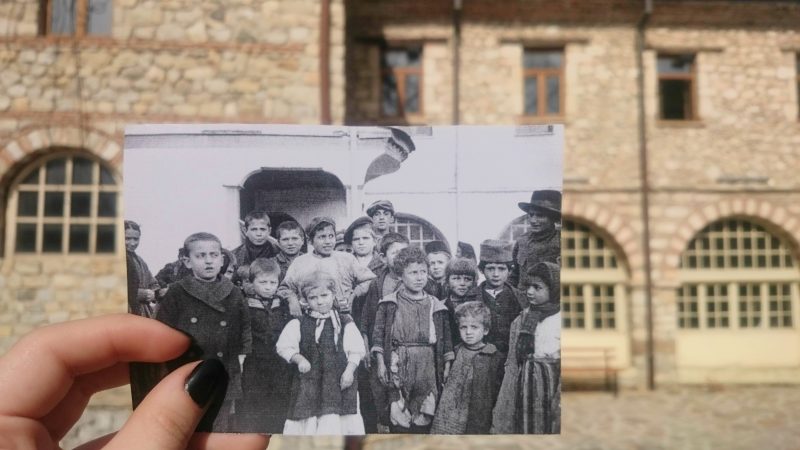 Children taking a photo in front of St. Dimitri church in Bitola. Used with permission. 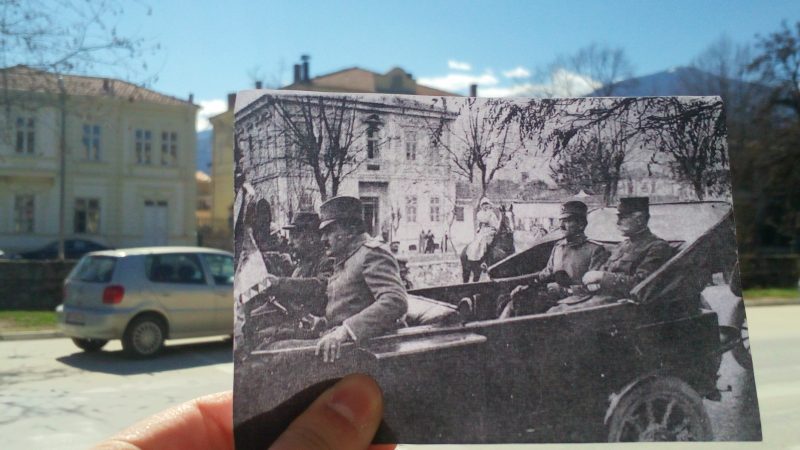