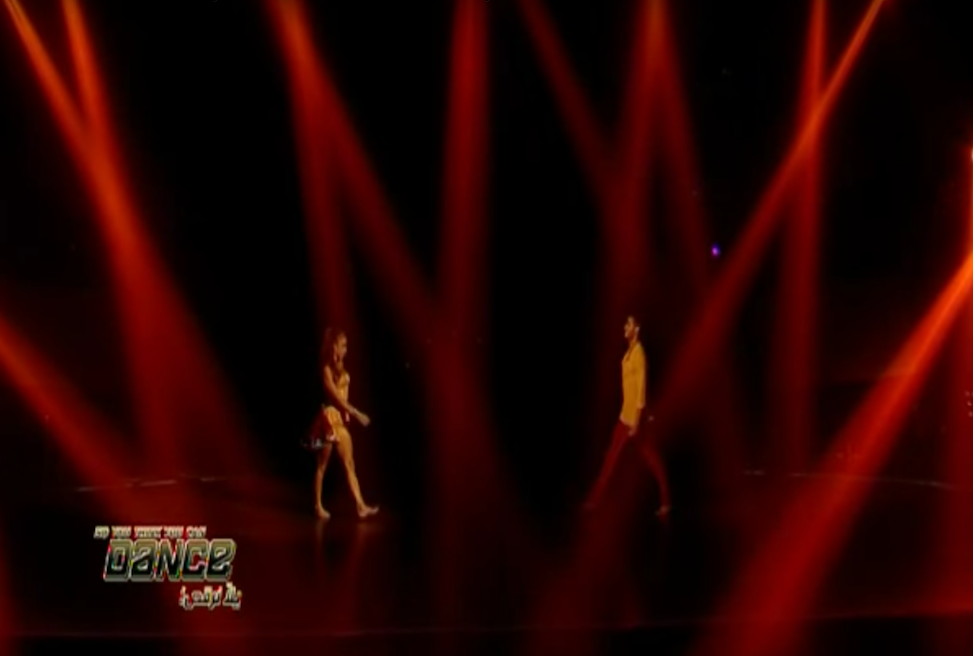 Cynthia Assadourian (left) on the set of ‘So You Think You Can Dance?’. Screenshot of YouTube Video.

“It's incredible what these shows have done to our profession.”

This is how Lebanese dancer Cynthia Assadourian described to Global Voices the impact of shows like the Arabic versions of So You Think You Can Dance?‘ (يلا نرقص) and Dancing With The Stars (رقص النجوم) on the public's perception of dancing.

Assadourian, who was herself a former contestant on So You Think You Can Dance, said that she's been witnessing a sort of bodily liberation around her:

Latin dance, in particular, has become mandatory in dance studios. You see men and women of different ages and from all walks of life coming into the studio to have fun and work out. Even men are letting go of their fear of hip-shaking. I never thought I’d live to see the day where men would do that.

Of course, people still come in with a fear of not being able to keep up with the choreography but that’s normal. It might be difficult at first but eventually, your body and mind get used to it. It just takes a bit of practice and hard work. Most people prefer to take up dancing rather than hit the gym, because it doesn’t feel like a workout.

Lyne Gandour, a popular hip-hop dancer, first caught the eyes of her dance teachers at a tender age. She was constantly praised for having a contagious energy whenever she danced. Her ability to memorize choreography and improvise made her one of the most well-known young dancers in Lebanon. Just like many others in her field, Gandour also noticed a shift in attitude when it comes to dance:

My first steps in dance started at a very young age with gymnastics, that I learned in my home country of Ivory Coast. Being raised in Africa developed in me a big respect for this form of art. When I moved to Lebanon, my dedication for dance grew ten times stronger, particularly because of how people treated dance and dancers. When I opened my new dance studio, my aim was to educate my students about dance and make them work very hard at it. I want this artistic domain to be as challenging as any well reputed major in Lebanon.

Such a shift would be very different from the public perception of dance that Gandour encountered when she first moved to Lebanon:

I believe that dance has been quite often associated with pejorative meanings in the Arab world. I never felt like dance earned the respect it deserved until programs such as Dancing With The Stars came to the Arab world. It was seen more as a sin rather than an art form.

She, too, credits these dance shows with changing people's perceptions:

Seeing your celebrity role model expressing her or himself in a new language made all those fans want to understand what dance is all about. Dancing With The Stars gave this form of art a second chance, allowing everyone to see the struggle, drive, dedication all dancers go through; which made it real, raw and definitely relatable.

Another side effect of this popularity has been a rise in Arabic pop music videos using dance crews that perform slick choreography behind the artist. Popular Arabic artists such as Najwa Karam and Assi El Helani took part in this popular new trend, despite making music that couldn't be further from the hip-hop genre.

Sometimes artists come to me last-minute wanting to learn choreography. The truth is, I only teach them a step or two. It’s painful to see non-dancers trying to execute choreography. This is why I prefer to incorporate my own dance crew. I don’t want to embarrass the artist and make them look awkward. I’ve been doing this for more than 15 years. I even opened my own hip-hop dance school.

No matter the reason, the shift in the Lebanese public’s opinion regarding dance has become more apparent now.

With dance shows highlighting the incredible amount of dedication and effort dancers — and non-dancers — put into just a three-minute piece of choreography, it’s no wonder so many dancers are now opening new dance schools.

Even academic institutions such as the Lebanese American University (LAU) hopped on the performance bandwagon, making it among the first to cater to art students interested in pursuing a career in the performance arts. It is among a handful of tertiary institutions offering both a bachelor's degree and a minor in Performing Arts.

It seems like Lebanon has become more accepting of professional dancers, and more respectful of dancing as a profession. There is no telling what the future holds for this energetic new trend.