In Syria's Al-Waer, the Uncertainty of Evacuating Weighs Heavy on Residents 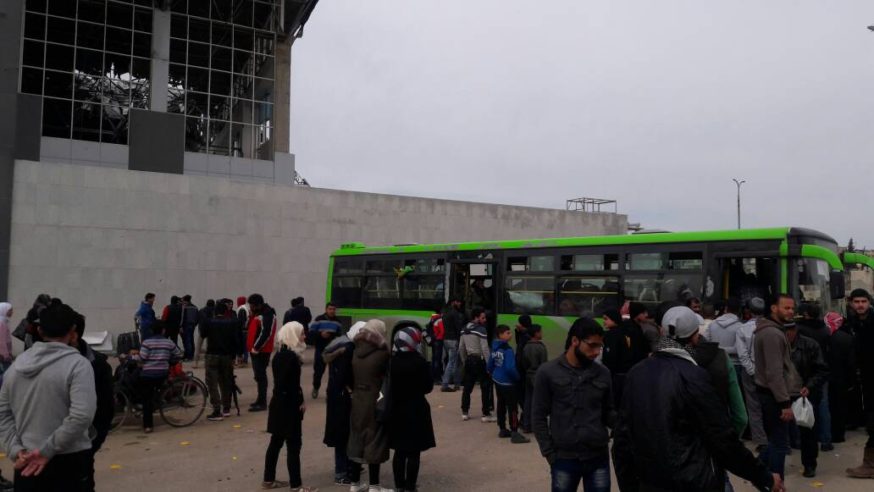 Al-Waer residents hop on the buses that will take them to Jarablus, northern Syria, one of the destinations where they ‘chose’ to resettle following the latest agreement between the regime and the armed opposition. Madinat Al-Maared Square, Al-Waer, Homs. Taken on March 27, 2017. Source: Maher Al-Khaled/SyriaUntold.

Syrian rebels and their families are in the process of evacuating their last bastion in Al-Waer, which has been dubbed “the capital of the revolution,” following a Russia-brokered agreement. The exodus will take place in batches, until the departure of the last person wishing to leave the district, at which point it will be handed over to Syrian government forces.

Residents, however, are also given the option to stay.

The civilian population is now caught between the grim prospects of being displaced and uprooted, on the one hand, or remaining in a state of uncertainty, on the other, each of which is an infinitely difficult choice to make.

This is part two of a story written for Syria Untold by Jood Mahbani, a Homs-based journalist and civil activist, and translated by Yaaser Azzayyaat. It was originally published on May 8, 2017 and is republished here as part of a partnership agreement. Read part one: Whether They Stay or Leave, Residents of Syria's Al-Waer Face an Uncertain Future.

According to the agreement, those who wish to leave with the rebels are allowed to evacuate in weekly batches, at a rate of 1,500 to 2,000 individuals per week. It is expected that batches will continue until mid-May, followed by the deployment of Syrian and Russian civilian police.

After searching the district and ensuring the security of the remaining residents under Russian supervision, which is supposed to deter any retaliatory action, the neighborhood will be entirely handed over to Syrian government forces. This particular point is what frightens people and leaves room for rumors to circulate: What is the fate of those who remain after handing the district over?

None of these questions can be answered, although the Syrian government has repeatedly stated, through Homs Governor Talal Al-Barazi, that no civilian who remains in the district will be harmed, and that the government encourages people to stay.

In an attempt to project good intentions towards the residents, the Syrian government asked the committee that represents the neighborhood to record the names of those who left or are leaving to Jarablus and Idlib and may wish to return to the district — in case they leave and later regret it and decide to return to Al-Waer.

All these assurances, however, do not seem to deter the remaining families in the district from leaving along with the upcoming batches. The scene of displacement is repeated weekly, when the Madinat Al-Maared Square witnesses a mass gathering around the green buses entering the district to relocate families to their chosen destinations. There, people bid farewell to each other, their looks devoid of hope, and many refusing to speak to the media.

In front of one of the buses, a young woman hesitates to board after bidding every relative of hers farewell. She glances at everything around her, and then looks at her foothold and stands still. The woman seems to have just been overwhelmed with the realization that this is her last footstep in her neighborhood, which she may not tread again for years. She does not stay like that for long, as other women become restless and push her onto the bus, where she soon gets out of sight.

At the opposite bus stands an old man who does not carry luggage, indicating that he intends to stay. He firmly grips the hand of his grandson, before the child has to step up to the bus accompanied by his parents. The old man hugs his son with one hand, the other still holding his grandson’s little hand.

“I beg you, daddy, let me stay with grandpa,” the child says with tears gushing from his eyes. With apparent difficulty, the father pulls his son’s hand away from his grandfather’s, then kisses his old father’s forehead for the second time, and utters his last sentence: “Forgive me, father, it was never my choice to leave.” He climbs quickly onto the bus with his wife and child, hiding with the passengers and leaving the old man standing alone in the square.

On April 24, 2017, the arrangements for the sixth evacuation, which was heading to Jarablus, continued for a full day, causing the residents to feel very weary and fatigued. The neighborhood is scheduled to be again bled of its people through forced displacement by the beginning of the next week.

It is worth mentioning that rebel-held Al-Waer has been subjected to several violent military campaigns. The last full-scale siege has been gradually imposed by the Syrian regime forces over the past five years, resulting in waves of displacement that have led to a decline in its civilian population.

In the recent military escalation in early February 2017, parachute mines were dropped on Al-Waer for the first time since 2011, according to testimonies by local activists and doctors. Armed opposition forces finally surrendered and agreed to leave the neighborhood, provided that those wishing to leave are also allowed to go to opposition-held areas.