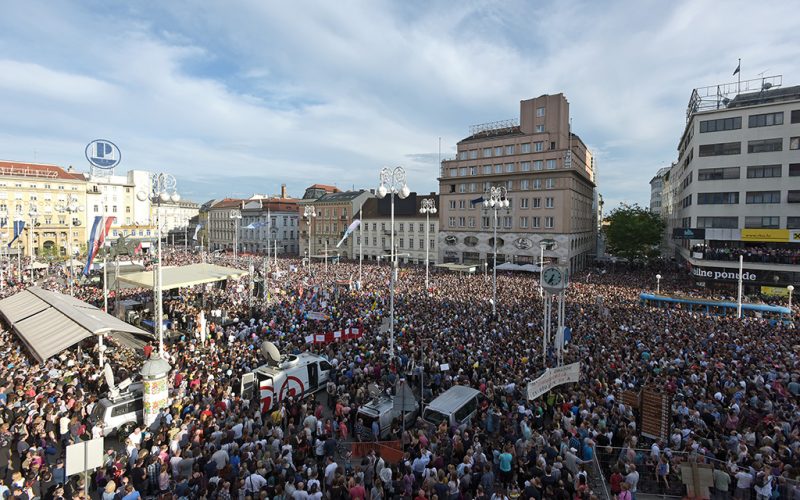 On June 1, 2016, 50,000 Croatians took to the streets of Zagreb, demanding educational reforms under the slogan “Croatia can do better.”

On the first anniversary of the protest, organizers say they'll be mobilizing once again to ask for accountability in education. The initiative will gather more than 250 different organizations, trade unions, teachers, and other individuals interested in raising the quality of education.

Last year, authorities tried to minimize the importance of the demonstration, deemed “a party” by the then-Minister of Education Predraga Šustar. Protesters didn't consider his remark funny. The description of the Facebook event for the anniversary protest reads:

This wasn't “a party,” this wasn't “waiting for a tram.” This was a demand for educational reform. Anyone who's thinking more than four years ahead knows that investing in education is worthwhile. Quality education creates people who initiate changes, start businesses, build a democratic society based on solidarity.

Refusal to fulfill the demands for educational reforms based on expertise meant a loss not only of one year, but of a whole generation of female and male students.

This is how we say #CroatiaCanDoBetter in sign language. This was the most important event of 2016, because #CroatiaMustDoBetter.

Organizers invested what was left over of the money raised for the 2016 protests into a scholarship for a student who is also the parent of a small child; Leonarda Špiranec, 25, won. Previously, they published a detailed financial report on the spending.

The follow-up protest is scheduled for June 1 in Zagreb's main square, and will include a march towards the main train station. The goal is to remind authorities about the demands of their movement. Organizers say when it comes to shaping education policy in Croatia, political and private interests outweigh the constructive proposals put forward by educators, and as a result, Croatia continues to experience massive brain drain.

Current Minister of Education Pavo Barišić echoed the quip of his predecessor by remarking that this protest is not a protest, drawing criticism by the citizens.

I would not call it a protest. I see it as something that brings additional incitement to all of us to make the reform successful, for everybody to contribute in their own way.

Barišić is currently embroiled in a plagiarism scandal, which has further invited the scrutiny of Croatians.

Tweet: Hey, check out what Barišić is doing: the new law on science prohibits firing people on account of plagiarism. #becauseCroatia

Link: Barišić fine-tunes the law on science as if Germans could take away his PhD title

The article linked by the above tweet contrasts the attitude of German authorities, who acted swiftly by removing caught plagiarists from public office, and the actions of Croatian authorities, which only serve the “interests of several top decision makers.”