A Jamaican Cultural Landmark Gets Some Much-Needed Tender Loving Care 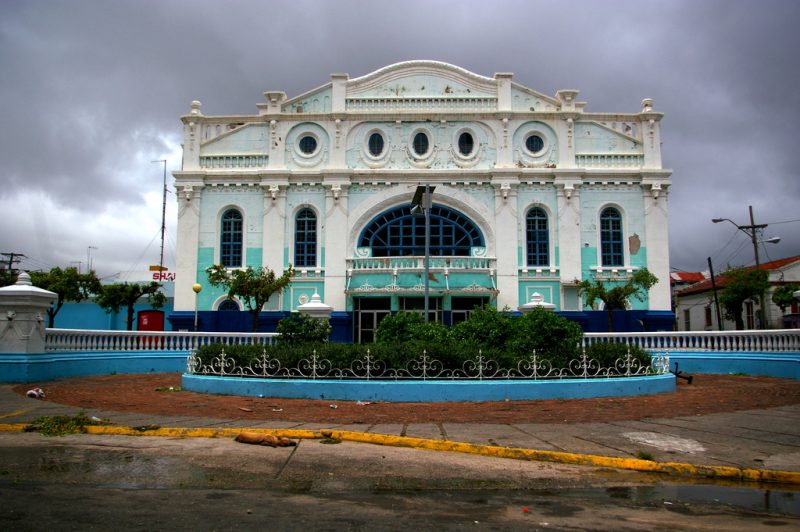 Councillor Delroy Williams, who recently took up his post as mayor of Kingston and St. Andrew, has hit the ground running with his vision for the redevelopment of downtown Kingston, inspired by the city's United Nations Educational, Scientific and Cultural Organization (UNESCO) designation as a Creative City of Music.

For this year's Labour Day — a day set aside for community improvement projects — the mayor's flagship project was the restoration of the historic Ward Theatre in downtown Kingston. The venture appears to have been well-received by the Jamaican public and drew widespread support, including from the Ministry of Culture (which is also hoping to build a state-of-the-art concert hall). However, there remains much work to be done.

Despite its colonial origins, the Ward Theatre, situated in the busy heart of downtown, has a special place in many Jamaicans’ hearts. Over the years the building has steadily deteriorated, with pieces of plaster from the façade occasionally falling on passers-by. The private Ward Theatre Foundation had not been successful in raising sufficient funds, despite appeals. Declared a national monument in 2000, its decline has troubled many Jamaicans, given that the Ward has witnessed many historic occasions, both cultural and political, before and since the country's independence from Great Britain.

Colonel C.J. Ward donated the space to the City of Kingston in 1912, after the former theatre was destroyed in the earthquake of 1907. Many international and local performers have graced its stage, including Marian Anderson, Paul Robeson, Alicia Markova, Anton Dolin, Charles Laughton, Arthur Rubinstein, the Dance Theatre of Harlem, the National Dance Theatre Company and many others.

It was also the home of the National Pantomime — another colonial institution that is part of many childhood memories — which stopped playing there in 2002, because of the poor state of the facility and its surroundings.

In the past few years, there have been repeated calls, laced with nostalgia, for the theatre's renewal. For example, Justine Henzell (the daughter of Perry Henzell, director of the acclaimed Jamaican film “The Harder They Come“) tweeted three years ago:

And the media at the time pointed out the need for the Ward's renovation:

@televisionjam is back to this utterly heartbreaking #wardtheatre feature! It is such a shame that it still stands in proper ruination.

One Twitter user made reference to the inaction of administrations on both sides of the political fence, despite both parties being launched at the Ward:

And just one year ago, blogger Wayne Campbell wondered:

Are there any plans to restore the Ward Theatre to its former glory? #PerformingArts #WardTheatre #actors #screenwriting #theatre #culture

Now, it seems Campbell's question has been answered.

As part of his vision for making Kingston the cultural hub of Jamaica, Mayor Williams has seized the proverbial bull by the horns and decided to tackle the very costly task of renovating the Ward Theatre. On May 23, 2017 (Labour Day), his office mobilized 40 volunteers who began work in specific areas of the building, beginning with the dressing rooms and restrooms. Both Prime Minister Andrew Holness and Opposition Leader Peter Phillips participated in the work and gave brief remarks praising the effort and the importance of both Jamaica and Kingston's cultural heritage.

Response to the Ward Theatre renovation was generally enthusiastic:

It warms my heart to see Ward theatre being renovated. It's been way too long and at least a bit of our culture will be restored ??♥️

Tears well up. This is wonderful. Congrats and thanks to all who worked behind and in front over time. Mr. Mayor, good work #shipofstate https://t.co/NEDMNBW3xj

Even younger Jamaicans who were not familiar with the Ward were impressed. One shared on Instagram:

My first time putting foot inside the much touted #WardTheatre…. and immediately a sense of history dawned upon me…. I really can't understand how we allowed thugs to mash up this country. # #downtownisbeautiful #downtownrestoration #downtown #Kingston #Jamaica #nostalgia #history #LabourDay

While the Institute of Jamaica‘s Colin Greenland is leading the charge on fundraising, Mayor Williams has set up a management plan and hopes to have the Ward open for business by August, with the space being fully operational by December 2017. The Jamaica National Heritage Trust notes challenges, however — including termite infestation and other structural issues.

Additional hurdles that cannot be overlooked include the perception of high crime in the area, which has proved a deterrent to would-be theatre-goers in the past. While a downtown Kingston redevelopment project is in its planning stages, there is so much more to do when it comes to beautifying and securing the theatre's surroundings.

Actor and dramatist Aston Cooke shared the mayor's comments about the importance of theatre on Facebook:

‘Theatre is an important cultural space in any society. It is similar to a mirror — a means to look at self as it reflects society. A theatre is also a space which nurtures the creative and creativity is very important to a prosperous and progressive society. It is also a space to float ideas and where all ideas can contend, and we learn the customs and culture of other peoples. No progressive society can operate without this critical space.’