Whether They Stay or Leave, Residents of Syria's Al-Waer Face an Uncertain Future 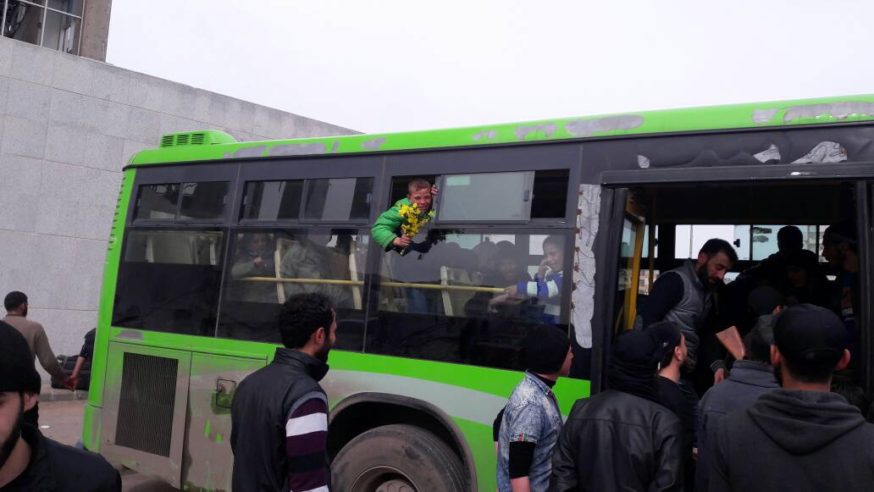 A child holds a bouquet of flowers while leaning from one of the buses that are used to resettle Al-Waer residents. Madinat al-Maared Square, Al-Waer, Homs. Taken on March 27, 2017. Source: Maher Al-Khaled/SyriaUntold.

This story was written for Syria Untold by Jood Mahbani, a Homs-based journalist and civil activist, and translated by Yaaser Azzayyaat. It was originally published on May 8, 2017 and is republished here in two parts as part of a partnership agreement. Read part one below. For part two, click here.

This is the question often asked by the residents of the Syrian city of Al-Waer, west of Homs city and part of Homs district, when inquiring about each other’s different destinations. Rebels and their families are evacuating their last bastion in the city that has been dubbed “the capital of the revolution,” following a Russia-brokered agreement.

After six years of war, which began as a popular uprising against the Assad regime, the latter is regaining control with the support of both Russia and Iran.

As per the agreement, which was signed on March 13, 2017, by both the regime delegation and Al-Waer Neighborhood Committee, the exodus will take place in batches, until the departure of the last person wishing to leave the district, at which point it will be handed over to the Syrian regime forces.

Since no substantial guarantees have been offered, many of the residents have opted to venture to the “unknown” instead of awaiting the “inevitable,” according to Ibtisam Al-Masri, a mother of four children. (Pseudonyms have been used throughout this story for security purposes.)

She imagined that the fate of the district would at best be similar to that of Eastern Aleppo. “They will not leave anything unlooted,” she added, before stepping into one of buses that would take the fifth batch of exiles to the city of Jarablus. “They will retaliate against all those who stay, which is why I’m leaving… no way could I stay and watch them murder us and raid our homes.”

The opposition media stress that the Homs district is on the brink of descending into systematic demographic transformation engineered by the Syrian regime, as has been the case in cities such as Daraya, Al-Qusayr and Eastern Aleppo, all of which have previously been besieged and ultimately evacuated.

However, the situation in Al-Waer is far more ambiguous and complex, and it is yet unclear whether the regime is actually willing to evacuate all of its inhabitants before deploying its forces.

The Al-Waer evacuation deal has been peculiarly marked by the opening of crossings to allow civilian property owners to enter before the regime forces do so. It also included the option to remain for those willing, unlike what had happened in Eastern Aleppo, for example, where all civilians had been evacuated before regime forces entered.

Nonetheless, the mistrust of people in the Russian patronage, as the sole guarantor of the deal, in addition to the armed Shiite villages that are adjacent to Al-Waer (Zarzuriya, Hayek and Mazraa) have led to widespread dread in the district. There have circulated many rumors that there are Shiites militants in Mazraa village (which is contiguous to al-Waer) awaiting the last batch of rebels to evacuate the district in order to raid the remaining civilians and persecute them.

Consequently, the civilian population has been caught between the grim prospects of being displaced and uprooted, on the one hand, or remaining in a state of uncertainty, on the other, each of which is an infinitely difficult choice to make.

‘I don’t want to leave my house, my belongings, my memories’

Hayyan Al-Siufi, a 30-year-old civil activist, described the last five years he has spent under siege as “years of loss.”

He described to SyriaUntold the harsh conditions of bombardment, besiegement and destruction of infrastructure, admitting his regret for not having decided to emigrate since the beginning of the armed turmoil in Syria. “I do not know, what all of that was for?” he added in bewilderment. “Why have we remained patient? For us to finally be displaced like this and leave our homes and loved ones?”

Hayyan is only one of thousands of young people in Al-Waer who are eligible for forced conscription or reserve duty, and who have preferred to remain in the rebel-held enclave since 2011 and did not travel abroad. They had hopes that the war would one day come to an end, and they be exempted from the compulsory service or reserve enlistment.

However, as the evacuation of the district became a reality, with only a few weeks remaining for the batches to be concluded, most of them decided to register their names to leave. They refused to stay for fear of the same old-new concern, that is, the compulsory military service in the Syrian regime’s military.

Moreover, if men under the age of 40 quickly determined to leave to opposition-controlled areas, the harder decision concerned their families and relatives. These have mixed priorities, responsibilities, fears and expectations.

Stranded between their attachment to the roots as well as to their departing sons, a lot of families have been split in their decisions, with some withdrawing their request to register the chosen destination and re-submitting it several times.

“We registered for Idlib in order to promptly leave for Turkey. We then realized that smuggling is not that easy and never inexpensive, so we decided to change to Jarablus,” said Umm Rami, justifying her presence with a group of residents at one of the registration centers, despite the expiry of the deadline for choosing a destination.

As SyriaUntold spoke to her, it was revealed that she is a government employee, and that her husband’s age exceeds the required age for reserve. They nonetheless opted to leave with their three children out of concern for them.

“The elder is 26, and he is wanted for reserve, the middle is 20 and is wanted for compulsory service, and the youngest is 15 which means he is approaching the age of military service.”

Wrapping the neck with her palms as to alleviate agony, she added in a hoarse voice: “I feel horribly defeated. I don’t want to leave my house, my belongings, my memories, but I also cannot leave my children at this age.”

At the registration center for the assigned destinations (Idlib, Jarablus, Homs northern countryside), people exchange advice and share information obtained by those who preceded them to one of those destinations.

Some sweeping statements that have been repeated more than once by several people take the form of mantras circulating in the neighborhood as scientific fact. “Idlib has cheap rent costs for homes,” “Idlib’s problem is that it’s dangerous and subject to bombing,” “Those choosing Idlib are in fact choosing Turkey through a smuggling route,” “The regime forces will arrest all those who remain in the neighborhood,” “Jarabulus is safe, but dwellings are very difficult to secure,” “If you could live in a tent then you can go to Jarablus,” “The northern countryside will soon suffer the same fate of Al-Waer.”

Umm Rami retreats from a group of women talking, leaving the ladies behind her to resume their conversation. She drags her feet with difficulty, holding tears which could not but overflow from her eyes. “All of this is pointless,” she told SyriaUntold. “We are swarmed with details, and are amusing ourselves with which destination is better, Idlib or Jarablus… but we are missing an important thing: It’s all the same! We’re leaving!”

Read part two of this story: In Syria's Al-Waer, the Uncertainty of Evacuating Weighs Heavy on Residents