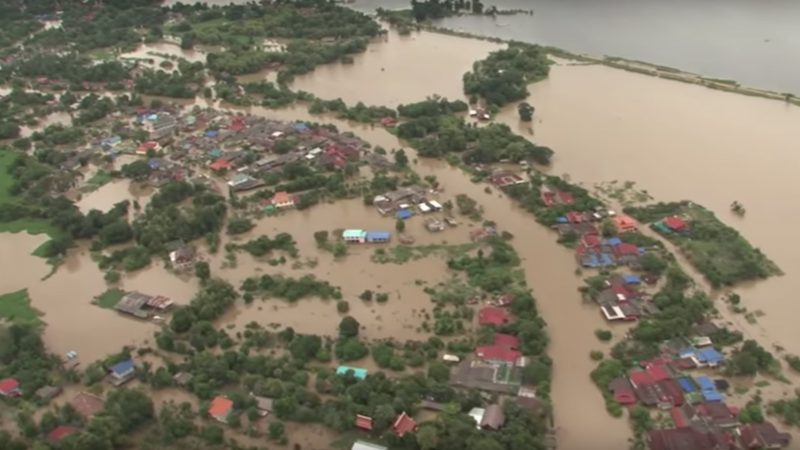 More than 100 killed in a recent flooding disaster in Sri Lanka. Screenshot from the YouTube video of World is One News.

The island nation of Sri Lanka is currently facing the worst flooding and landslide disaster in a decade. Triggered by the southwest monsoon that typically arrives in late May, heavy rains caused the rivers Kalu, Kelani, Gin, Nilwala, and Attanagalu Oya to spill over their banks in 15 districts, located in the country's southern and western regions.

According to the May 28, 2017 advisory of the Sri Lankan Disaster Management Center, 126 people were killed and almost a hundred people went missing because of the floods and mudslides. Over 400,000 people have been affected since last Friday (May 26), and about 100,000 people were relocated to 304 safer locations.

The rains subsided on Saturday (May 27) and water levels in some areas began to recede. Health and sanitation are a huge challenge in the affected areas which continue to be inaccessible.

Below are some images and videos which show the extent of the flooding disaster:

Twitter users like Azzam Ameen and Sri Lanka Tweet have been updating about the flood situation regularly. Many are using the #FloodSL hashtag to monitor the impact of the disaster.

Sri Lanka’s deadly floods could exacerbate dengue crisis, warns Save the Children as more rainfall is on the way #lka #FloodSL

The government has stepped up relief efforts. More than 1,600 soldiers from the Sri Lanka Army has been engaged in flood and landslide relief operations in the affected areas. The airforce deployed five aircrafts for rescue operations and another five are being readied to transport emergency supplies to residents trapped in flooded villages.

Sri Lanka has issued a global appeal to UN, the International Search and Rescue Advisory Group (INSARAG) and neighbouring countries to provide assistance for the affected people. An Indian naval ship carrying medical supplies with 125 personnel docked in Colombo, the country's capital, on Saturday and two more will arrive soon.

Various organizations and startups are also coming forward to help. Facebook pages like Help Flood Victims in Sri Lanka and 2017 Disaster Relief – Information Desk- Sri Lanka are providing important information about the flood situation and humanitarian relief. Some are using Twitter to campaign for flood relief:

People who wanna put up your hands and help. We need volunteers and donors. Join in. #FloodSL #Flood2017 #SriLanka #RT #Help pic.twitter.com/NDDu3XKMIa

For anyone looking to donate dry rations and essential items for #FloodSL victims – pic.twitter.com/y67BHmy9r5

Taxi hailing app PickMe (Sri Lanka) is asking people in distress to share their location via the app so that the Disaster Management Center will be notified.

Last year, in the aftermath of the disaster that cyclone Roanu brought, PickMe introduced a “flood relief” button that allowed users to call for a vehicle to pick up relief and donations which were forwarded to the Sri Lankan Red Cross free of charge. They also introduced an “SOS” button which led to over a thousand requests and 150 successful boat rescues for those trapped by floods and landslides.

The combined efforts of the government and ordinary Sri Lankans who are maximizing various social media platforms are bringing stranded residents to safety and sustaining them through relief operations. This has helped prevent the further loss of lives as Sri Lankans now face the long road to recovery.