On the 45th Anniversary of Okinawa's Return to Japan, People Protest US Presence 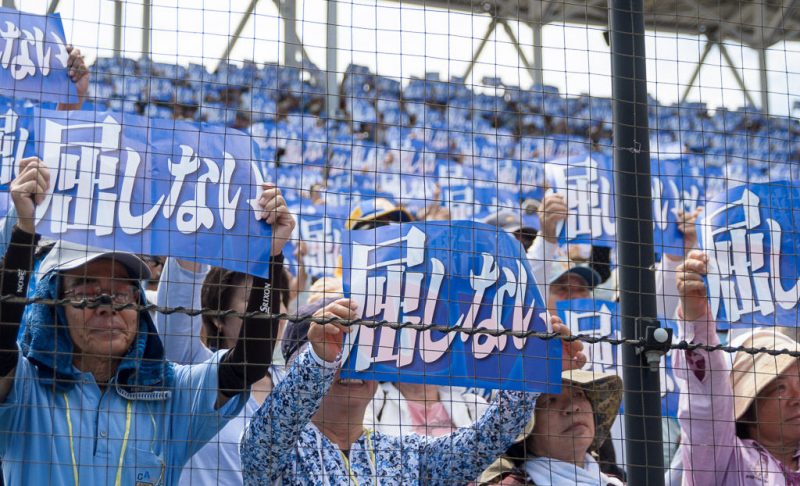 May 15, 2017 saw the 45th anniversary of the return of Okinawa to Japan from American possession. The month of May was marked by protests in Okinawa about the ongoing construction of an American base in a relatively pristine bay, and fears that Japan's newly passed anti-conspiracy legislation may make it more difficult for groups of Okinawans to protest the US presence there. Continuing demonstrations against the US military presence in Okinawa have received little attention outside of the territory itself.

Following Japan's defeat in World War II, the United States administered Okinawa until 1972. It was developed into a base for the American military in the Western Pacific; despite accounting for just 0.6% of Japan’s territory, Okinawa is home to over 70% of American military installations based in Japan. US military bases occupy at least 18% of the main island of Okinawa.

The bases are a legacy of the trusteeship that lasted until 1972, during which time the United States needed facilities to support its war against North Vietnam. Since 1972, bases on the island and the US military presence in Japan in general exist according to the Status of Forces Agreement (SOFA) and Treaty of Mutual Cooperation and Security between the United States and Japan,  known in Japan as Anpo joyaku (安保条約) or Anpo (安保). While the American military presence provides a significant economic windfall for the residents of Japan's poorest prefecture, on a crowded island the bases generate considerable noise and take up a lot of space. There have been efforts over the years to move the bases to other locations.

The 45th anniversary of Okinawa's reversion to Japan sparked renewed protests — and opposition to one new base in particular, which is under construction.

In 2013, Prime Minister Shinzo Abe and then-governor of Okinawa, Hirokazu Nakaima, signed an agreement to build a new US Marine base at Henoko Bay, a relatively pristine area that will be destroyed by landfill to create the facility. The decision triggered ongoing protests and civil disobedience that briefly made national news, just as Okinawa marked the 45th anniversary of its return to Japanese sovereignty.

According to a recent interview with a former mayor of Henoko, military use of the area has always been based on the agreement that locals can use the land too. The new base prevents that.

In April 2017, work commenced to fill in parts of Henoko Bay, triggering protests at the gated entry to the construction site. Japanese police cracked down on protesters who showed up to protest the base's construction.

One video posted to Facebook, showing excessive police response to the protest, has been viewed thousands of times. The video was uploaded to YouTube by “rapping activist” Ogesa Taro, who also provided photos and updates about the protest, sometimes accompanied by poetry, on his Twitter account.

While I despair of this country
As long as there are people who share this sense of despair
My hope stays alive
This is the final bastion of democracy.
[…]

Much of the protests in the month of May have been fuelled by the decision to fill in parts of Henoko Bay with rock, to make way for a seawall and helicopter landing pad.

Four 10-tonne dump trucks have dropped loads of rock in the ocean. As you can see in the images, the rocks release a lot of dust that is polluting the waters of the bay. It hurts the hearts of the canoe and boat teams out on the water who are continuing their protests.

In April, Okinawa governor Onaga Takeshi sought an injunction to stop work on the seawall, with no success so far. By the end of May, Onaga had once again formally asked for the proposed Henoko base be relocated to Guam, a request he has made in the past.

Okinawa governor Onaga once again questions plans to go ahead with construction of Henoko base, asks for plan to be reevaluated, and base be moved to Guam instead.

While protests will continue, there are fears about how much power the police will have to stop them going forward. Japan justs passed its controversial anti-conspiracy legislation in late May, which gives police wide powers to place almost any group under surveillance.