The Male Romper Gives the Caribbean Blogosphere a Lot to Ponder 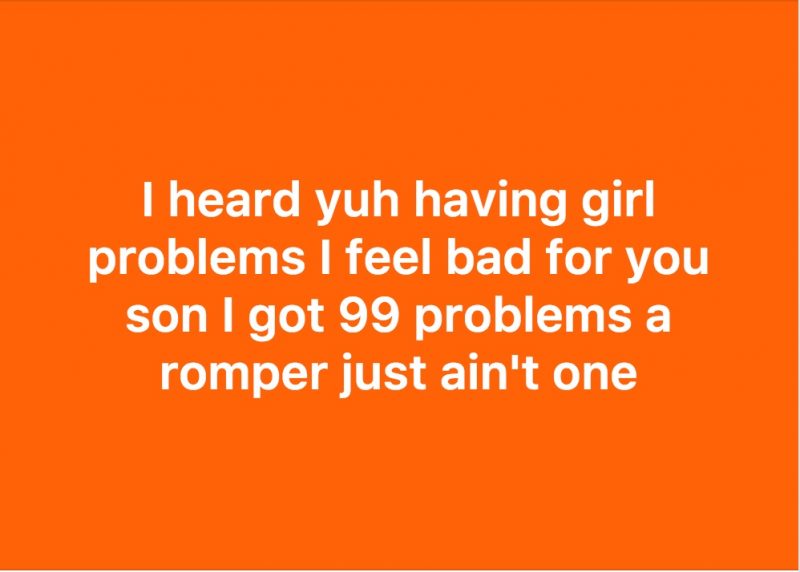 The Caribbean has caught Romphim fever. While the guys aren't necessarily rushing out to buy the new “rompers made for men,” Internet users are certainly discussing it on social media.

In a region that has a reputation of being intolerant of alternative lifestyles, the male romper is being perceived as something only gay men would wear, so the fashion trend has, unfortunately, fanned that flame. But several female Facebook users advised their male counterparts to take it easy — after all, it was just a piece of clothing that didn't actually have the power to make them epicene. From Jamaica, Corretta Singer advised:

Dear Men,
Deep breaths…Calm down…no one is going to force you to wear a romper.
1. It's not going to suddenly become a mandatory uniform that you HAVE to wear in public for society to accept you. (*side eye*)
2. We all know you don't want to have to be put in a position to experience what women go through on a daily basis, by wearing clothes that make you feel exposed and vulnerable. (God forbid)
3. How fragile is your masculinity if you think an item of clothing is SUDDENLY going to make you effeminate?
Here are some simple solutions:
1. If you don't want to wear a Romper….DON'T WEAR A ROMPER
2. If you feel like you want to wear a romper…WEAR A ROMPER AND OWN DAT SHIT!!!

She then posted a photograph of actor Sean Connery in his role as James Bond…wearing a romper. Similarly, Trinidadian Petranilla London posted a photo of Sir Winston Churchill in a romper, adding, tongue firmly in cheek, “OMG!!!!!!!!! WINSTON CHURCHILL WAS GAY!!!!!!!!!!!!!!!!!!!!!!! WE HAVE TO CHANGE THE NAME OF OUR HIGHWAY!!!!!!”

One of Trinidad's main roadways is the Churchill-Roosevelt Highway.

Compatriot Franka Philip shared the post of “Churchill… rocking de romps…” as a nod to London, who “is on a campaign to show the folks who are calling overalls/rompers gay that they're overreacting a bit”.

Jumping into the fray was Loop News, which did a post featuring five Caribbean entertainers who rocked the jumpsuit.

Philip suggested, though, that the more pressing question to ask was, “Why are so many men and people who feel they know men so insecure about what masculinity should look like?”

On the heels of several instances of violence towards women in the region, much of the recent online discussion has involved the topic of the “macho” way in which Caribbean men are typically socialised.

There were some men who had no problem with going against the grain, though. Facebook user Niki Lakatoo boldly asked, “Where in Trinidad selling rompers. I will sooo ware [sic] that shit & not give a f@$k about people.” Indeed, one commercial photographer, who called the romper trend “social media gold”, was “dying to get in on the front end of the rompers craze before it truly blows up”, and invited male models to message him for a lifestyle shoot.

While one Facebook user referred to shooting of a different kind, that didn't stop one man from modelling his humourous take on the trend — oilfield rompers — particularly relevant to Trinidad and Tobago because of its energy-based economy.

The popular Facebook page Kermit the Ranker called out the double standards around the Romphim with a meme: 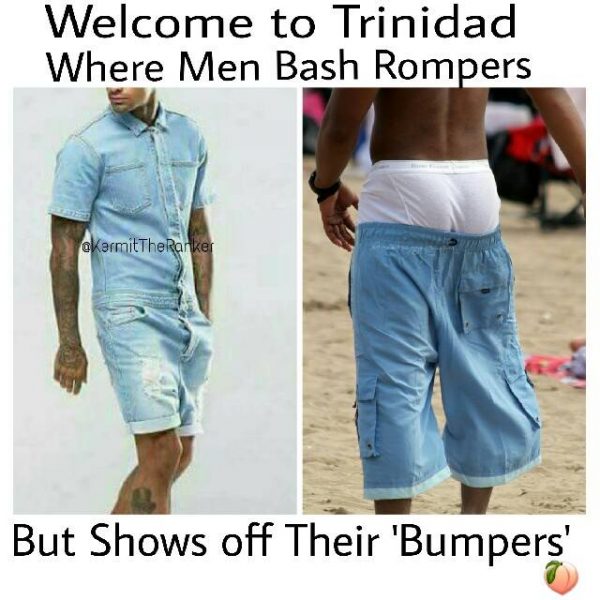 Meme by Kermit the Ranker, widely shared on Facebook: “Welcome to Trinidad, where men bash rompers but show off their ‘bumpers’.”

Some businesses saw the whole hullaballoo as an opportunity to attract social media attention. One pharmacy chain in Trinidad and Tobago posted a Facebook update for a romp-comp (a romper competition): 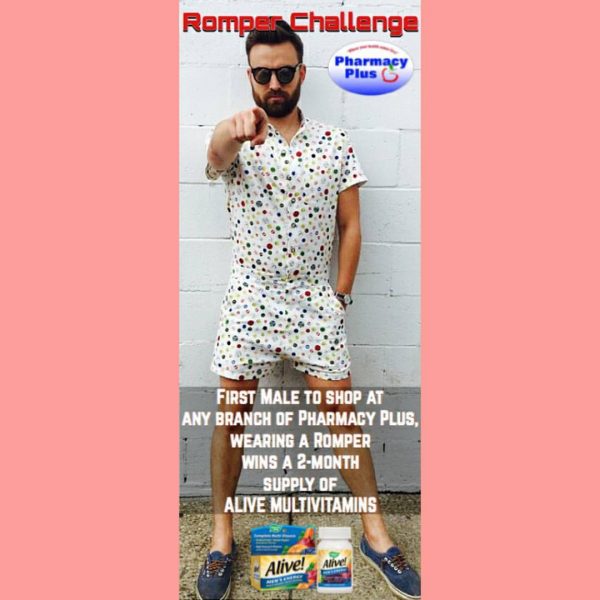 A Facebook post by a pharmacy chain, using the romper craze to attract customers: “First male to shop at any branch of Pharmacy Plus wearing a romper wins a two-month supply of Alive Multivitamins.” 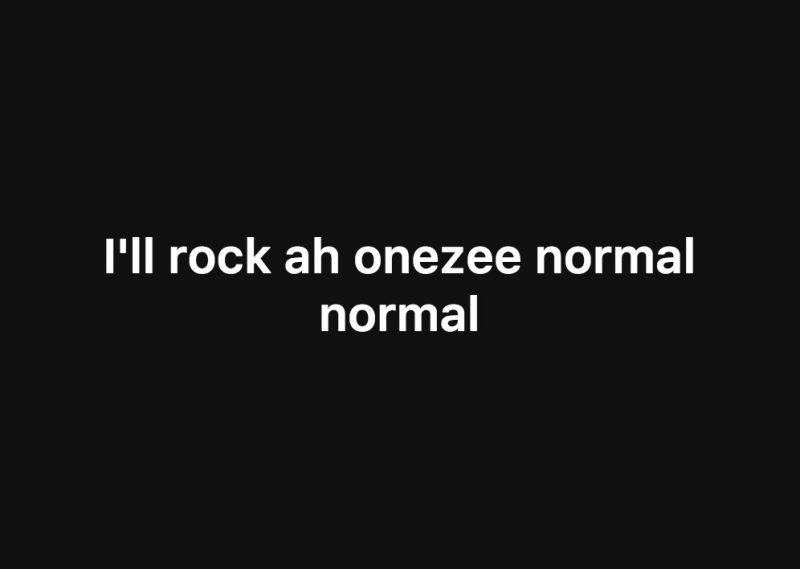 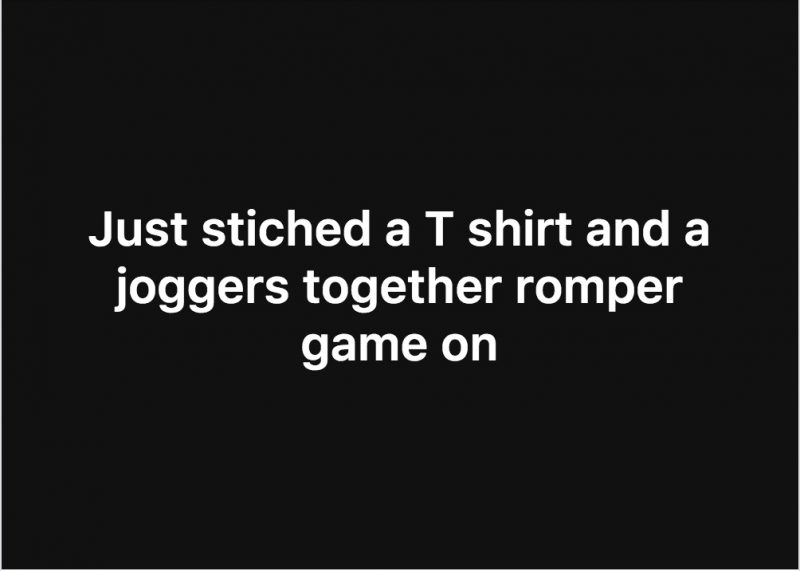 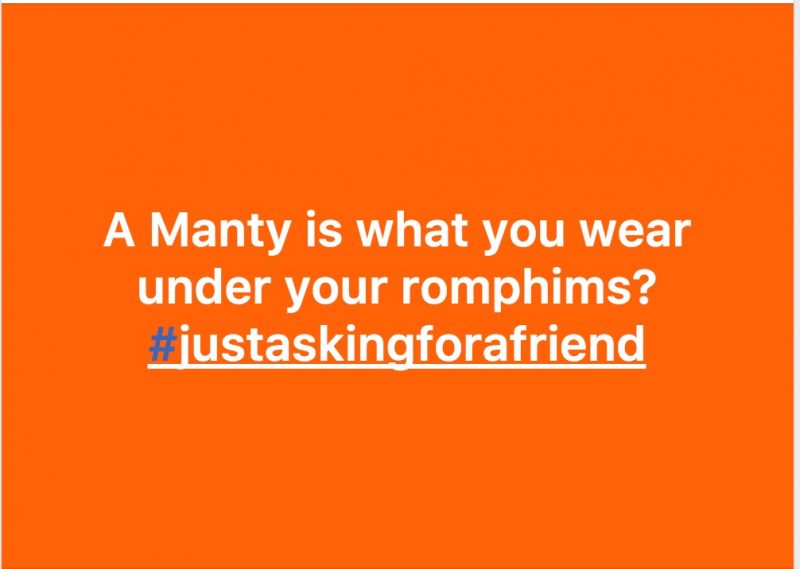 Public Facebook status update by Darren Trinity Cheewah: “A ‘manty’ is what you wear under your ‘romphims'? #Asking for a friend.”

Facebook user Marvin Gaskin, meanwhile, was troubled by the fact that “Trinidad [is] a country falling apart in many ways, but men wearing rompers getting far more attention than important issues in social media”.

Cheewah cleverly summed it up: 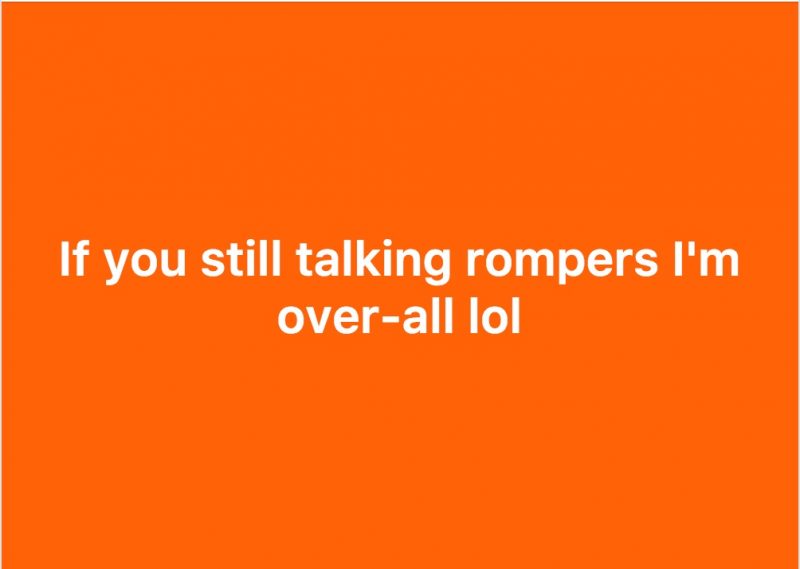